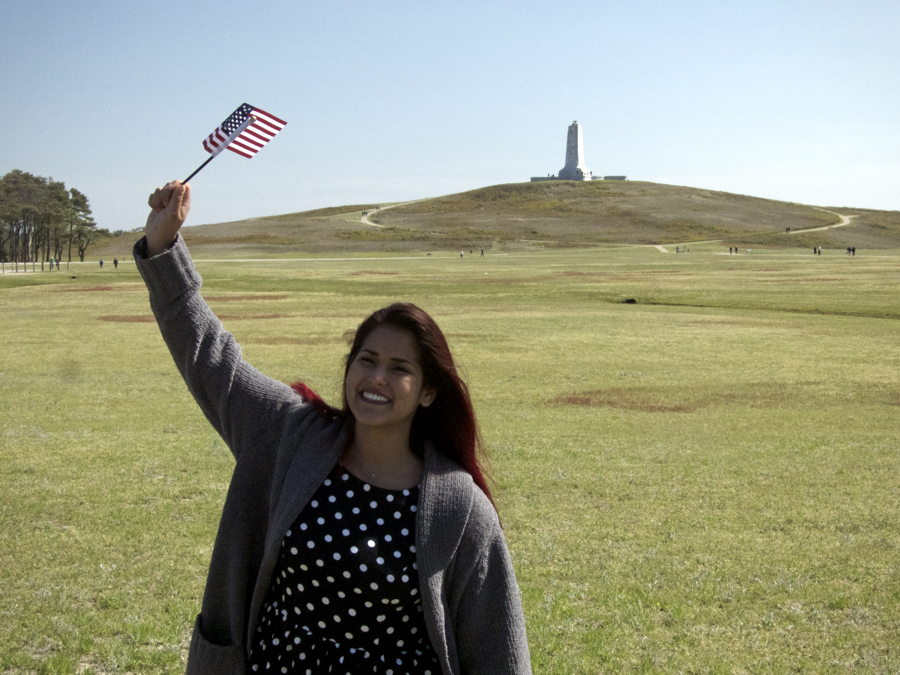 Juliana Vaca-Triperri, as a newly sworn in US citizen.

The United States welcomed 39 new citizens to its rolls on Saturday at the Wright Brothers Memorial. Hailing from 23 countries, they raised their right hand and pledged their allegiance, their hopes, their dreams and their love to the United States of America.

Witnessing the event is affirming and powerful—a declaration that this country is the one place that is seen as offering opportunity and freedom not found anywhere else; this is the one place the “huddled masses yearning to breathe free. . .” see as a shining beacon that represents so much that is good in the world.

These 39 new citizens may not be the “wretched refuse” of some teeming shore that Emma Lazarus wrote in words inscribed on the Statue of Liberty, but they are not the elite of society. They are laborers, students, small business owners—the very fabric of American life and the stuff of the American dream.

Juliana Vaca-Triperri is 18 and her family came from Ecuador when she was five. Her family lives in Charlotte, although she is spreading her wings. “I’m actually going to school at UNC Wilmington right now,” she said. “I’m taking biology on the pre-medical track.”

She is sitting next to Raul Campos from Mexico. “On the 30th of this month I will be here 16 years,” he said. 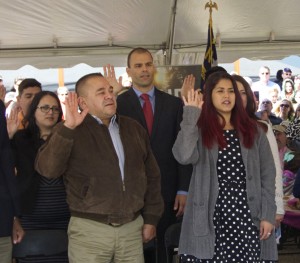 Hands raised to become the newest US citizens. Raul Campos in brown jacket, Fabiano Menezes de Souza wearing a red tie, and Juliana Vaca-Triperri in the black and white dress.

A truck driver, to him the American dream was the opportunity he could give to his five children. “I could improve all the things about my family,” he said. “The quality of life, the quality of education.”

They came from all over North Carolina and Virginia. But at least one new citizen did not have far to travel.

“At first I came to the United States to learn to speak English,” he said. Over time he came to see his new country in a different light—a place unlike any other.

“It’s the greatest country on the planet,” he declared.

He let the folks in Rio, where he grew up, know what was happening. “I called my mom. My family’s proud.”

And he stands, smiling with his arm around his wife’s shoulders. “It’s the best decision I’ve made in my life,” he goes on to say.

“It’s a long journey to get here,” he added. “It makes me feel great. Complete.”

The Countries Represented at the Swearing in Ceremony

A side note about Ecuador

When I interviewed Juliana Vaca-Triperri she mentioned her family was from Portoviejo, a coastal city in Ecuador. The city with a population of about 250,000, appears to be about 80 or 90 miles south of the epicenter of the earthquake that struck the country, although images show extensive damage to the city. The earthquake occurred about 8:00 p.m., seven hours after the swearing in ceremony.