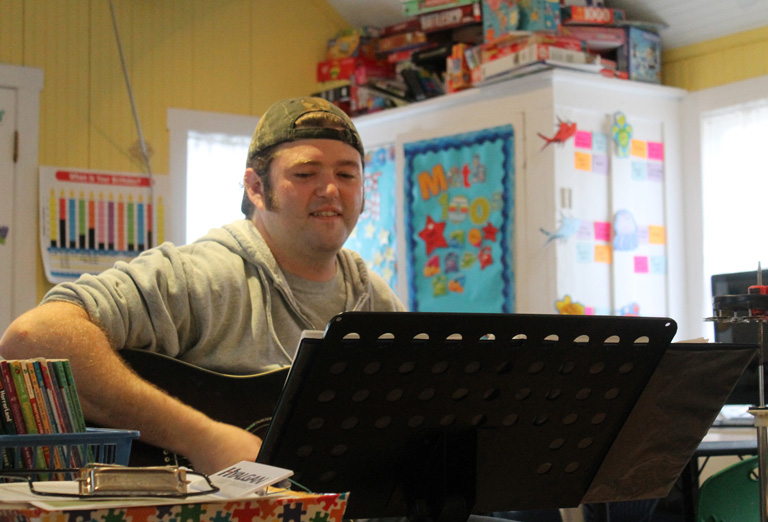 The Mustang Music Festival, a festival that donates its proceeds to the Corolla Wild Horse Fund, has been growing in popularity. As it continues to grow it will become more and more a part or the Outer Banks community—at least that is what the show’s founder, Mike Dianna of Mike Dianna’s Grill Room, is hoping.

With the Mustang Spring Fling scheduled for May 19 this year, Mike is starting a new part of the program, asking his performers to play at local schools. “It’s an outreach program,” Mike says. “It’s another way to give back.”

This morning singer/songwriter Andy Begina was at the Water’s Edge Charter School in Corolla this morning playing to a small but enthusiastic audience. Singing along, clapping, laughing, the kids brought out all that’s best in live music.

Andy, performing classic Beatles’ tunes, Credence Clearwater Revival, some Bob Marley and more, seemed in his element with his audience.

According to Mike, the idea for bringing the musicians to the schools came from local singer, Laura Martier. “It was Laura’s idea,” he said. “She felt we should get the kids at a young age and expose them to live music.”

Although in the first steps of teaming the Mustang Music Festival with local schools, Mike is planning on expanding the program. “I hope to, down the road, to get money into music programs in schools.”

For more information about the Mustang Spring Fling and the Mustang Music Festival go to www.mustangmusicfestival.com.