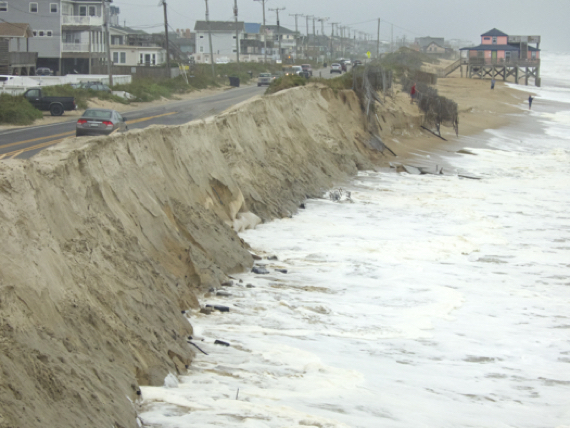 At the recently repaired stretch of the Beach Road north of the Black Pelican, high tide Thursday afternoon.

We’re a pretty hardy bunch here on the Outer Banks and after living here for awhile weather just becomes another part of everyday life. For the most part, there’s not much to complain about—summers are hot in their time, spring and fall are usually pleasant and winter is cold and damp, but it’s supposed to be.

When a storm does come along, we tend to roll with it, accepting that four or five days of wind and rain isn’t enough to keep anyone from daily activities.

Every once in a while, though, Mother Nature throws an unhittable curveball that can’t be ignored and plans suddenly change.

That happened this week.

Everything had lined up to make this one of the best weekends of September; the ESA Eastern Surf Championships at Jennette’s Pier were scheduled to run all week, the 4th Annual Outer Banks Bluegrass Festival had the best lineup they have had yet, and the Dare County Arts Council had their 26th Annual Artrageous celebration of the arts scheduled for Rec Park on Saturday.

And then that pesky low took up residence off the South Carolina coast and started pumping wind, rain and waves our way and everyone’s plans changed. 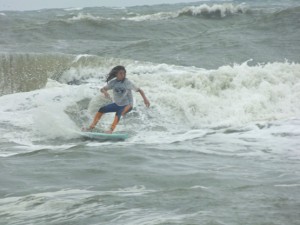 Competitor at the ESA, Thursday, September 24.

The ESA competitors gave it their all and through Friday morning they were still out there, but conditions were deteriorating quickly by the afternoon—3.75” of rain with winds from the NE at 25 mph—and the Saturday forecast didn’t look any better.
Nonetheless they did get some good days of competition in, and the competitors may be listed as amateurs, but they were riding the riding 6-8’ waves in severe chop as well as anyone could. 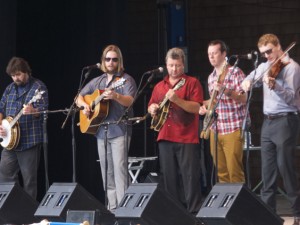 Great music Wednesday and Thursday at the Outer Banks Bluegrass Festival, but Friday and Saturday had to be cancelled.

The annual Outer Banks Bluegrass Festival has had a run of great weather but the good times seemed to come to an end this year. That’s a shame, too, because local promoter Cory Hemilright and really put together an amazing show this year with Sam Bush, Rhonda Vincent and the Flame, the Steep Canyon Rangers and Pam Tillis.

They did get two days in, but by Thursday afternoon with forecasts calling for rising winds and driving rain, the show had to be called. Sitting outdoors at Roanoke Island Festival Park with wind howling 20-25 mph and 3” of rain falling left Cory no choice.

The forecast rain has yet to materialize today (Saturday) but with winds in Manteo at 15-20 mph and gusts to 30, the decision to cancel was the right one. 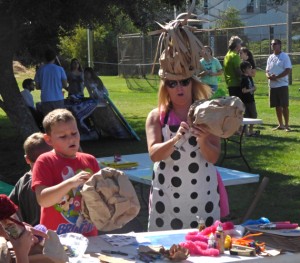 Artrageous-a celebration of the arts, kids and creativity.

Artrageous, which is probably one of the most fun days for families on the Outer Bank has been postponed. The folks at the DCAC waited until Thursday to make the decision but looking at the forecast they didn’t feel there was much choice. The rain date is Saturday October 31 and yes that is Halloween, so it should be a spooky good time.