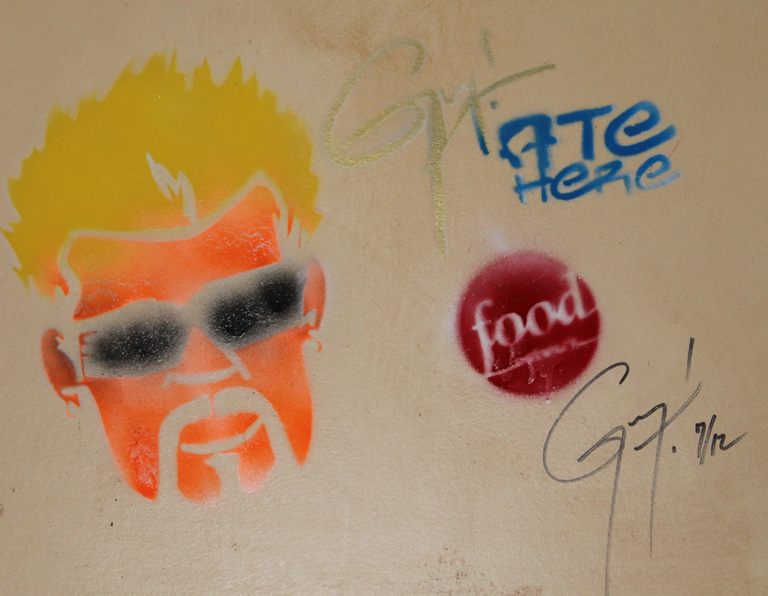 That’s why I didn’t quite understand why everybody was asking about his arrival. Friends, journalists, TV stations, everyone wanted a piece of this Guy and all I could think was: “Why anybody in their right mind would want to film here in July?” I don’t even like to go on the bypass to the post office, let alone try to go from Grandy to KDH on a Saturday.

But the production company seemed undaunted and well-funded, so a few dates were hammered out and it was on. Shutting down for anybody except the President in season is ridiculous, but free advertising is the music by which business owners dance, so I imagine it wasn’t hard to line up the six restaurants around the OBX to shoot. We ended up shooting two of the three days they said it would take for the show and an extra day of filming another show while we were open (talk about a nuthouse!) for a special show with Guy’s family.

Surprisingly, it was relatively painless, but we do have our own security staff and that seems to come in handy when dealing with famous people.

I was floored by how the production crew had their game down. They flooded in with lights, sound, two cameramen, a make-up artist and their own stainless steel custom prep table. The director watched the whole deal through the feed to his laptop, and then they were ready for the talent.

This was the only time I was uncomfortable during their visit: waiting for Guy. Apparently, while whisking Guy around in his ‘67 drop-top Camaro to six locations filming with two crews in four days, there tends to be quite a bit of waiting. At our first shoot Guy whips in and chats up everybody like the restaurant front man he naturally is. (A side note: I never got to ask him the restaurant worker’s quandary: “Being around food all day long, does he ever get time to sit down and really eat?”) He certainly has a big personality and has a practiced talent for getting that across on screen.

It took our Chef Pok an emergency scotch and soda to slow down enough to get a little jovial line-cook banter going with this crazy looking TV star. Not your average day of trying to get the groceries in the window to feed tourists.

Pok dropped into chef mode and they cooked a few dishes together, Guy peppering Pok with questions and running commentary. After his hour with Chef Pok, right on schedule, our regulars started showing up for the interview part of the show. Food and drinks went out to everyone in between prepping crew members and light poles as Guy worked the crowd with questions about our restaurant and their favorite dishes, cracking jokes, giving it his professional all to make regular people relax in front of the cameras.

Different people, including Aubrey and I, had our moments of trying not to look like idiots. Then the stidop lights went off, they sprayed their trademark stencil on the wall and poof! the star exited.

The crew of course had the “B” roll to shoot, so we got to know them better as our kitchen cranked out multiple plates of shrimp and grits, scallops, and anything else that excited them for filming. We also learned that’s how production crews eat.

In between nibbles they broke out their toys and filmed a row of our growlers and Lemongrass Wheat bottles on the bar with a remote controlled dolly and Flip camera – very slick.

In my opinion, these guys were the most interesting, many of them having worked for years on the 140-plus episodes of the show, and they could tell you the best cheap eats in half the nation.

It was an informative experience, if nothing else. I may not sign up for cable anytime soon but at least when I see Guy on the pub TVs while I’m trying to hustle some grandmother’s swordfish, I can say that I had my moment in the sun.