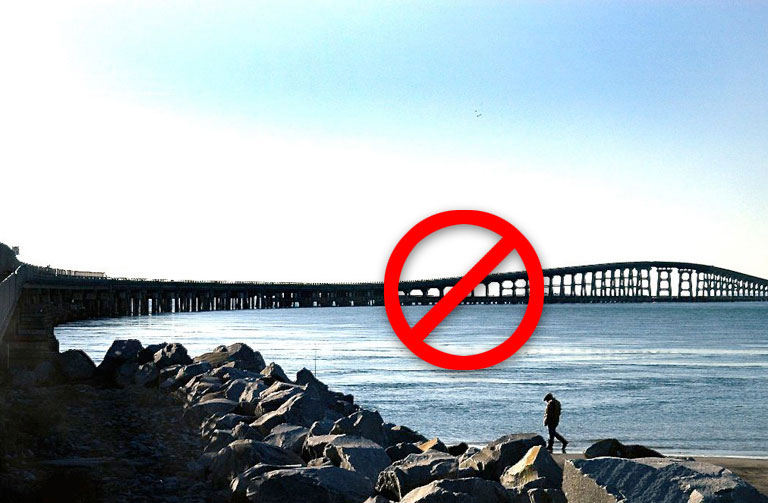 The Bonner Bridge, closed for repairs.

North Carolina Secretary of Transportation Tony Tata comes across—at least in public—as a fairly patient person. Competent, knowledgeable and certainly professional—especially in dealing with the public and the press, he was the ideal point person to explain what is happening with the Bonner Bridge.

Until Andy Fox of WAVY TV read a statement from the Southern Environmental Law Center . . .

To his credit Tata, who was clearly angered by the statement, never went overboard, but his criticism of the SELC was sharp, incisive and direct.

Here’s the statement that triggered Tata’s response: “NCDOT’s inability to secure all the necessary permits for its faulty plan to build a new bridge in the same unstable location is delaying construction of any new bridge.”

It’s no wonder he reacted as he did. The statement is hypocritical, misleading, self-serving and is, frankly, so patently and obviously false that it is a lie.

The reason NCDOT has not been able  “. . . to secure all the necessary permits for its  . . . new bridge . . .” is because the SELC has sued to stop construction in federal court and blocked the permits through CAMA administrative procedures.

It is a sad statement that the leaders of a movement that at one time championed truth and the individual have sunk to this level. At one time the environmental movement was at the forefront of forcing the government to testify truthfully, and sometimes painfully, about Love Canal, DDT and toxic landfills.

It was environmental groups that got us to understand the complexity of the natural world and how we as individuals are a part of it. There was a sense that they were trying to preserve the environment for everyone—not for an elite few to study from an ivory tower of glass.

And now this—an outright and outrageous lie. It’s difficult to say what is more offensive—the lie or the lack of moral courage to state, “We are opposed to this and we are taking all means possible to stop it.”

There is truly a sense of futility and helplessness in dealing with these people. The lawsuits and challenges are being brought by people who do not live here and have no connection to this area other than a self-imposed belief that somehow they can create an environment that has not existed for at least the past 50 or 60 years, and probably never existed.

If there is anything that can be done, perhaps it is through the power of the purse. The SELC represents the Defenders of Wildlife and the National Wildlife Refuge Association in their lawsuits. All three organizations are 501c3 nonprofits, and as such their donors are given a level of anonymity. Nonetheless, if the word were to go out loudly and clearly, “Do not donate to these organizations,” perhaps the power of the purse string would drive the point home.