Killing the Goose That Laid the Golden Egg 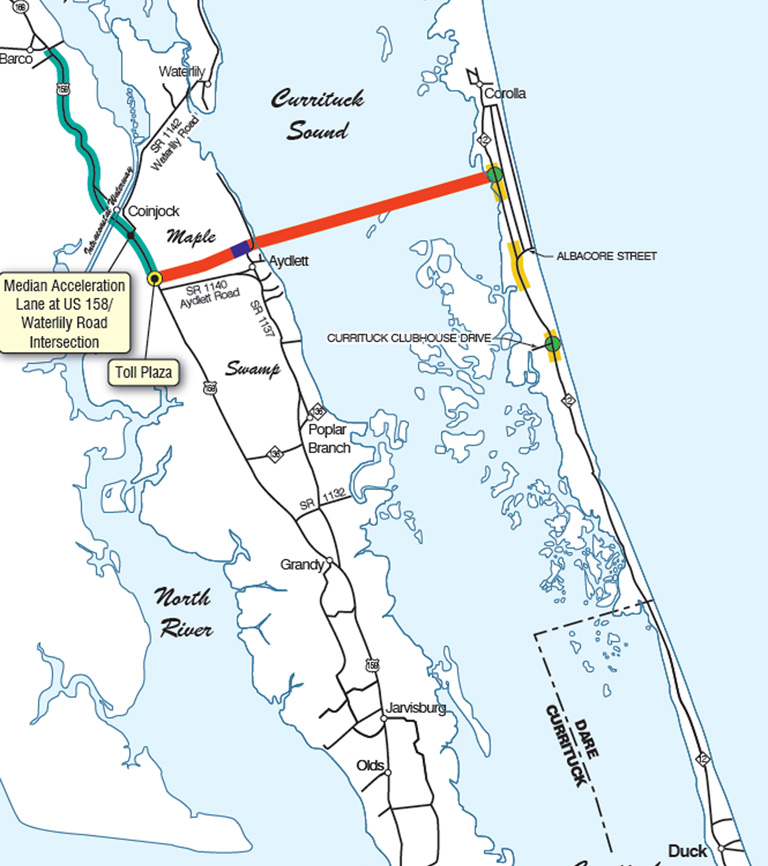 We’re having the best summer for visitation we’ve ever had on the Outer Banks. I know this because the traffic misery index has reached unprecedented levels on Saturdays. Sure property managers are pointing to record occupancy numbers, restaurants are overflowing and retail stores are jammed, but the true measure of how successful the Outer Banks is as a tourist destination is in how long it takes to get from the Virginia state line across the Wright Memorial Bridge.

Ten years ago, when traffic came to a standstill at the Cotton Gin up in Jarvisburg, it was irritating. As it backed up to the Joseph Knapp Bridge in Coinjock, it became maddening. Reports are now consistently being heard that traffic slows at the state line and progresses to a crawl soon after that.

Driving from Philadelphia, stuck in a car with two or three children and a husband and a wife, it becomes infuriating to realize the last 50 miles will take as long as the first 250.

There is no quick or easy solution to this problem. It is unrealistic to expect the Outer Banks to stop marketing itself—it is, after all, why just about all of us have a job down here. Nor is it realistic to expect property owners to not rent their homes . . . there is a substantial investment in them and that income is needed. And it is certainly not realistic to expect visitors to stop coming to this slice of paradise.

The truth is, the only solution is to build a bridge across the middle of the Currituck Sound—a plan that was first proposed in 1978, has been part of NCDOT’s transportation vision for over 25 years and has been in various levels of development for seven or eight years now. That development, by the way, is all the paperwork that goes into a project of this size.

If everything started moving forward at full speed today on this project, it is still doubtful that it would be finished within five years.

The bridge will be funded through a private/public partnership, so the cost to the state is relatively modest, although to keep the project moving forward North Carolina was supposed to pony up $15 million is what is called gap funding. It was funding that the state legislature deleted from the 2013 budget. In the interests fairness, Jim Trogdon, Chief Operating Officer for DOT, wasn’t sure if the agency would be in a position to use the funds this year.

But the loss of the gap funding is only a small part of a larger issue.

The Outer Banks—especially Dare and Currituck Counties—are a golden goose to the state. The amount of revenue these two counties send to state coffers is an economic bright spot in a dismal fiscal reality.

The goose, however, does have to be fed, and that is where the state seems to be failing. It doesn’t take a lot, but it does take something.

If the state does nothing to improve the condition of our beaches, the task falls on the shoulders of local government. The burden of paying for that will be passed along to the residents of those communities, yet the state will continue to enjoy the benefit of the revenues created by our visitors.

Charging a fee to use Outer Banks ferries has been put off for a year, but make no mistake, it will cost more to collect those fees than the fees will generate. And there is considerable evidence to suggest that collecting those fees will reduce visitation—creating what can only be described as a lose lose situation for state and local governments.

Before tourism came to town, the Outer Banks, especially Dare County, was one of the poorest regions of North Carolina. The investment made in developing a tourist industry for this jewel along the Atlantic Ocean has paid the state back many time over.

It is a lesson well worth remembering and one the new leadership in Raleigh seems to be forgetting.