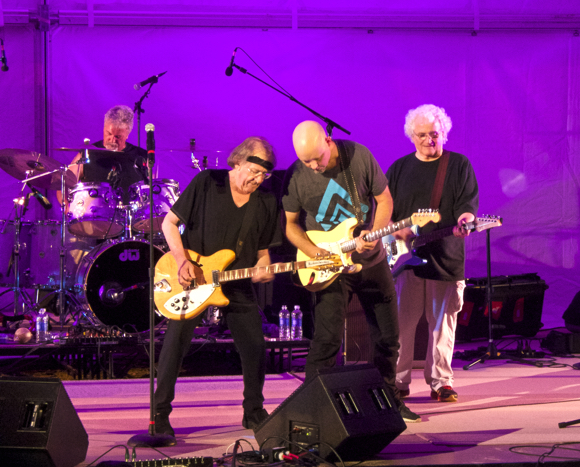 Wow! That’s the one word description for the Jefferson Starship concert at the Lost Colony last night.

There is a reason this band has endured, and it becomes apparent as soon as they take the stage. Combining superb musicianship with extraordinary vocals and a repertoire spanning 50 years, this is a group that has performed at the highest level for years and understands what that means.

Original members Paul Kantner on rhythm guitar and David Freiberg, rhythm guitar and vocals, are still touring with the band and it is evident these are master musicians who still have the passion and skill to bring an audience to their feet.

A brief aside, but interesting: it turns out that Freiberg lived in Manteo briefly, attending second grade in the town 70 years ago—which would make him 77 years old.

As part of the review, that age should be noted, because there are 20 year old singers with trained voices that do not sound as crisp, clear and with a resonant tonal quality as Freiberg does at his age. That was really apparent in his vocal solo of “Fresh Air”, the seminal hit of

Although the songs were, for the most part, taken from the history of Jefferson Starship and Jefferson Airplane, as musicians the group has evolved—although they regularly paid tribute to the original, the arrangements take advantage of a new set of musicians.

Nowhere was that more clearly seen than in “Wooden Ships,” the classic 1969 Jefferson Airplane hit. The 2015 version has jazz overtones that seem to give it an eerie, other worldly feel.

The opportunity to redefine some of the classics plays to the strengths of the group. Jude Gold on lead guitar is extraordinary. His homage to Jorma Kaukonen’s classic “Embryonic Journey,” defines how a great musician can take a song, remain true to the original concept yet make it his own.

Gold performed the song on an electric guitar; Kaukonen’s original was done on an acoustic. There was no doubt about the origin of the song, but Gold took the notes up the neck of the guitar, and let some of the notes ring through in a way that would be very difficult to do on an acoustic.

The energy for the evening was absolutely astonishing. Three songs into the set and people were dancing in the aisles and lining up at the foot of the grass leading to the stage and singing with the group. Equally as astonishing was the age range of the audience. For anyone who may think Jefferson Starship is a group living in the dustbin of rock ’n’ roll history, seeing young adults in their 20s and retired couples dancing the night away put the lie to that.

Because they’re professionals, the band knows what the audience wants and “wow!” do they deliver.

The band’s performance of “White Rabbit” was as good as it gets. The key to making that song work is the crescendo to the power of that last verse and last phrase, “Feed your head, feed your head.” The simple wonderfully subtle bass line sucks the listener into the song, and almost without knowing how the journey occurred, Richardson’s voice fills the air as Alice’s world falls apart: “When logic and proportion have fallen sloppy dead . . .”

All things have to end, but again as a tribute to a band who knows their audience—they did come back for an encore—“Volunteers.”

It does beg the question which generation is which, but it was great way to end things. Remarkable how many people know all the words to that song.

The Jefferson Starship concert was part of the Lost Colony’s Waterside Concert Series. The next concert, and last of the summer will be Resurrection—A Journey Tribute on Sunday, August 2.