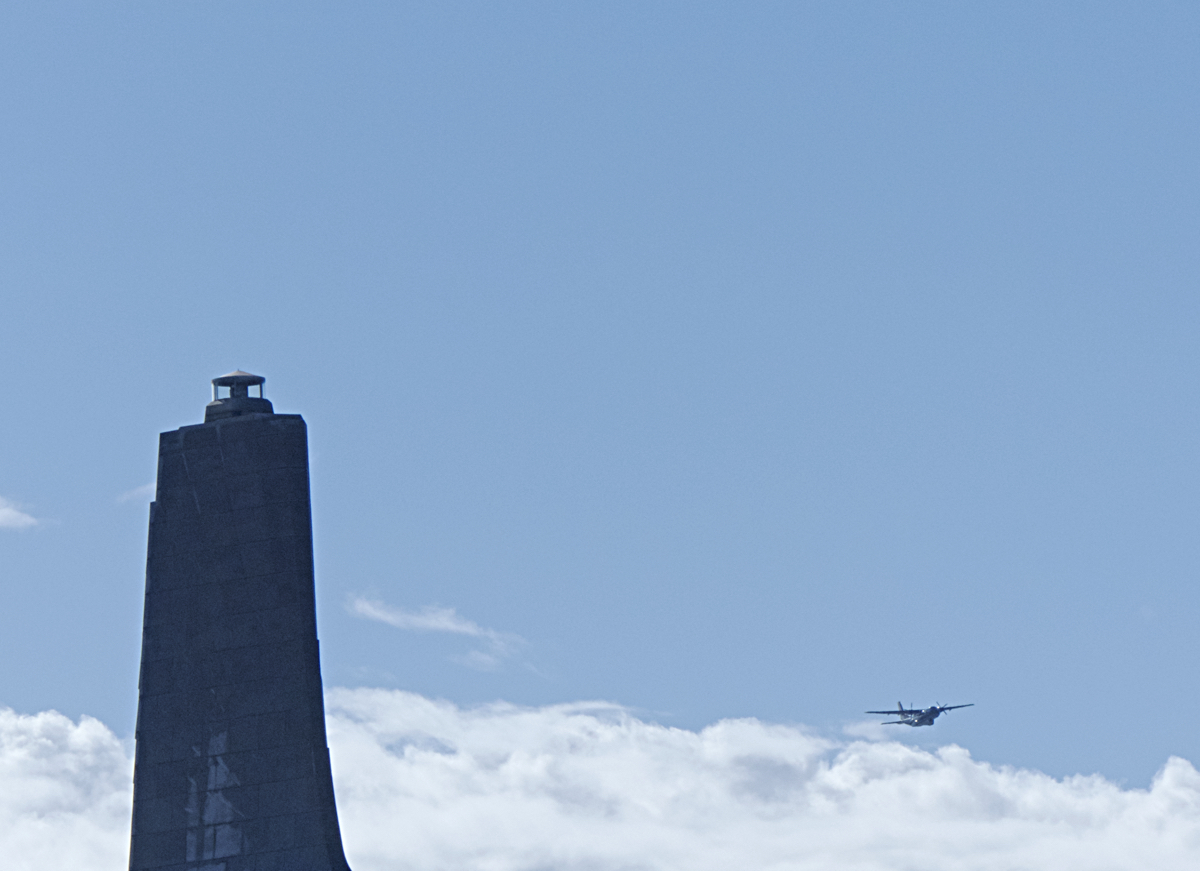 Lonely flyover. The only aircraft to make the flyover was a USCG twin engine Ocean Sentry,

The Celebration of Flight, December 17, is a day to honor heroes at the Wright Brothers National Memorial.

Two Coast Guard helicopter pilots were honored this year, and if the definition of hero has any meaning, Frank Erickson and Stewart Graham truly were heroes.

Captain Erickson and Commander Graham were the first two Coast Guard helicopter pilots, and they pioneered almost everything the world now takes for granted about what a rotary aircraft can do.

They graduated with their helicopter wings in 1942 and ’43, respectively. Both were trained by legendary helicopter designer Igor Sikorsky, and they were also passionate advocates for the role helicopters could play in security and rescue. 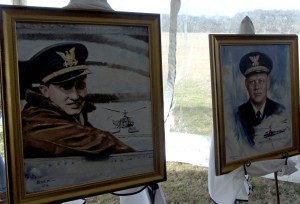 It was Erickson who flew the first rescue mission by helicopter—and the first to rescue a man floating in the water. The rescue of someone at sea involved technology that had not yet been invented, but according to keynote speaker, Admiral Zukunft, Commandant of the U.S. Coast Guard, that didn’t stop Erickson.

“They actually used a … tow truck hoist for that first hoist,” he said.  There were other firsts as well for the flyers. The two pilots were early champions for using helicopters in aerial surveillance and security, arguing that a rotary wing aircraft could take off and land on a moving ship.

In January 1944, then-Lieutenant Graham proved it could be done.

The Miracle at Gander, a rescue spearheaded by Graham and Erickson demonstrated to the world that helicopters could go where no other craft could.

On September 18, 1946 a Sabena Airline flight from Belgium crashed en route to Gander Airport for a refueling stop. It took 36 hours to locate the wreckage, but the crash site was so remote that a large-scale rescue operation was not possible.

Erickson and Graham (along with two other pilots they had trained) disassembled two helicopters, loaded them onto two C54s, flew to Gander, reassembled the helicopters and rescued 18 survivors from the flight.

For their efforts, the Coast Guard flyers were awarded the Belgian “Knight of the Order of Leopold” medals.

Yet another first that Commander Graham performed involved the Outer Banks. On December 5, 1947, Graham flew the first nighttime helicopter medical evacuation when he transported a patient from Cape Hatteras to Elizabeth City. 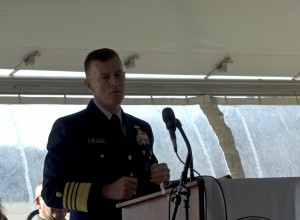 As keynote speaker Admiral Zukunft pointed out, the courage that Erickson and Graham showed was the courage of conviction as well as physical courage.

“We were a float Coast Guard,” he noted. “And it was radical thought that you could put a helicopter in air and integrate helicopter operations into float operations. It couldn’t be done. They put themselves at great career risks and risk to their lives.”

The commemoration of the Wright brothers’ first flight almost aways includes a flyover. This year’s scheduled aircraft were supposed to be Coast Guard helicopters and airplanes. Unfortunately, the weather did not cooperate.

It was sunny and windy on the Outer Banks, but certainly flyable weather. Elizabeth City, however, was socked in with fog and low clouds.

One aircraft did manage to get in the air, a twin engine Ocean Sentry, and it made one pass, but even that was delayed more than an hour from the scheduled 10:35 flight time.