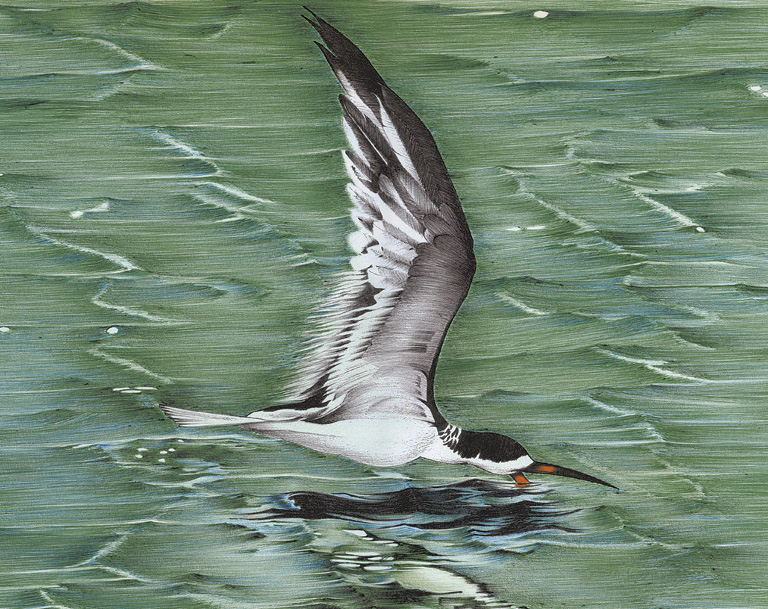 Using pen and ink and etching on glass, Gordon Lewis of Gordon’s Glass is an Outer Banks artist with a spectacular eye for the natural world.

Gordon Lewis knows his way around a ball point pen.

His intricate pen drawings of sea life, birds and boats often take him upwards of forty hours. It’s the sort of rare, raw talent that can’t be taught.

By day he works in the construction industry. “I do paint and drywall,” Gordon explains.

He has the well-worn hands of a carpenter, enjoys fishing, favors blue jeans and drives a pick-up truck—not the sort of man one might expect to make a masterpiece in his spare time.

“I take the guts out of an ink pen and stuff a diamond-bit Dremel tip in it,” says Gordon. “Then I can do it by hand.”

His glass etchings are remarkable and take hours with a steady hand. His favorite piece—one that incorporates a turtle, marlin and egret—took well over a hundred hours. “I had it appraised at ten thousand dollars,” says Gordon.

He’s etched glass in people’s doorways, windows, fireplaces, shower enclosures and boats. He was commissioned by a fishing tournament to etch a marlin onto a boat’s window, and it was a piece he loved making. Says Gordon, “I’d love to do more boats.”

Gordon’s been an artist since childhood. “I’ve been drawing for forty years. My brother used to draw a little bit—things like Superman and the Hulk—and he inspired me,” he says. “I wasn’t schooled in this.”

His brother was also the reason Gordon moved to the Outer Banks from Maryland eight years ago. Gordon’s four children—three sons and one daughter—were grown and he wanted to try out life at the beach. He started working for his brother’s paint and drywall business, but in the evenings he focused on his art.

“I probably didn’t draw anything for about sixteen years, between raising kids and working,” he says. Now he makes the time for his art on a regular basis.

“I like a dark room with light just on my work, and to have it be really quiet and peaceful,” he says. Of his favorite subjects, Gordon loves all things Outer Banks. “Pretty much coastal living,” says Gordon of his artistic focus. “That’s what people seem to want.”

And while the construction business pays the bills, Gordon has hopes that one day he might make a living using his pen. “I’d like to be able to travel with my art, getting into the shows,” says Gordon.

Until then, his pieces can be found locally at The Yellowhouse Art Gallery, Silver Bonsai and The Christmas Shop as well as online at gordonsgalleryofglassobx.com.