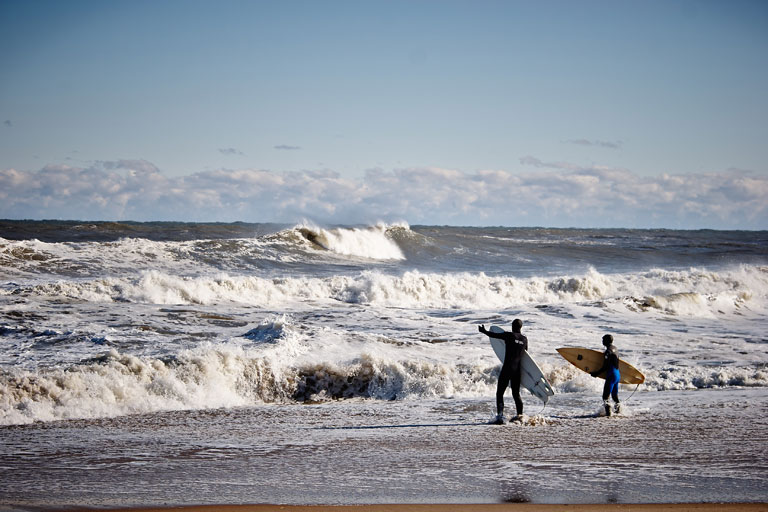 Dressed for cold weather and cold water surfing on the Outer Banks.

Surfing in the dead of winter can be a test of physical endurance, emotional fortitude and will power. This has been especially true if you surfed this winter in North Carolina. With arguably the coldest water and air temps in recent history hovering under the polar vortex that brought us three snow and ice storms in a 30-day period, it’s been enough to keep even the hardiest watermen out the surf.

While it can get easy to find excuses not to surf for the average Joe, this time of year poses a different set of circumstances for the hardcore adrenaline junky addicted to the Outer Banks thumping sand bottom barrels. The big question is: how do you feed that need without breaking the bank on an exotic trip to some tropical location for the four plus months of freezing air and water temperatures eastern Carolina has to endure?

Well, there’s snowboarding. Many of the OBX surf crew sneak up to western parts of Virginia to get some powder time on the hills. There are also trips to the tropics that can buy a week of sanity to a wave-starved rider. Eventually though, you’re going to find yourself on a sand dune during a freezing morning, staring out into a decent swell with offshore winds and decide, “Yes, I have to paddle out, no matter what the thermometer says.”

The good news is it’s not as bad as it used to be. Advances in neoprene technology have made it possible to spend an hour or two in sub 40 degree water with maximum surfing pleasure and minimal discomfort.

There are also a few tips that can make that icy plunge more productive to wave riding and less inductive to teeth chattering.

The first hurdle is the suit. Middle of winter demands a suit with an attached hood. Depending on your desired comfort and flexibility level, a 5/4 or 4/3 mm thickness should suffice. The hood keeps the water from flushing into the suit during wipe outs and duck diving on the paddle back out, not to mention the amount of internal heat you lose from an uncovered melon.

I also like to use Velcro cinches or duct tape around my wrists and the ankle that doesn’t have the leash on it to minimize the amount of water that can seep in from those areas. Newer sets of sealed booties and gloves are a must also, because when you lose feeling in your hands and feet, that sesh is over.

Another hot tip is deciding where to surf. Finding those spots that let you get out without rolling under a thousand lines of whitewater ensure a longer session before the shivers set in and send you to the car heater. A deeper channel next to a pier or a peak that’s only breaking twenty yards off the beach will allow a lot better surfing to paddling time ratio.

It is a great thing being able to four-wheel up and down the beaches this time of year and park right in front of those spots. Exposure to the elements will rob the body of heat; so changing from street clothes to wetsuit should be as efficient as possible. Surfing close to home, it’s always a good idea to suit up at the house and jump right from the truck to the ocean. When that’s not the case I still like to bring a jug or two of hot water to help thaw out while changing out of a wet wetsuit.

While a good suit can be considered a surfer’s closest companion around here, there is a lot we can do to repay the favor.

Fresh water and lots of it, is their best friend. Salt left in the seams and crevices will erode the neoprene making it less flexible and tighter. A good solid rinse should be mandatory after every use, and a soak in a 5-gallon bucket every once in a while is a great idea. I have also found that a few capfuls of antibacterial mouth wash in that bucket will help fight the smelly residue of that extra large 7-11 coffee that ends up in your booties two minutes after you hit the surf.

Well that’s my share of late winter tips; stay warm and dream of spring swells that are on the way.