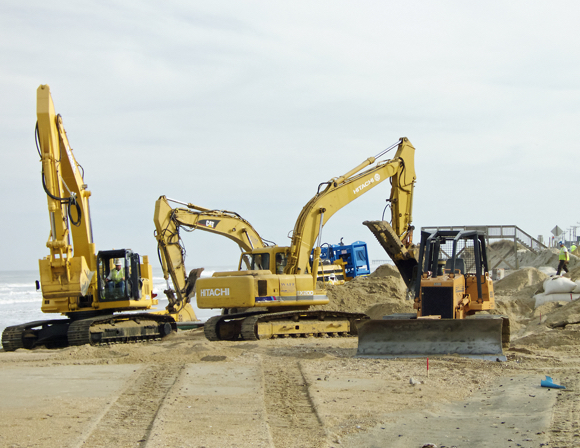 The cranes, dump trucks and assorted heavy equipment have taken up residence on the beach in Kitty Hawk once again. The Beach Road, torn into chunks of asphalt ranging in size from boulder to fit-in-your-hand will be repaired, resurfaced and and according to NCDOT ready for traffic by mid December.

This stretch of road that is being fixed rests immediately to the north of the road that was restored this summer—and significantly, that repair held up very well in the last round of storms and nor’easters that pounded the coast in late September and early October.

It is concerning though, that at low tide the sand is wet to the edge of the roadbed, a clear indication that the Atlantic Ocean seems intent upon reestablishing an ancient river channel.

To understand what is happening a journey to the end of the last ice age is needed. Twenty thousand years ago, huge amounts of water were contained in ice and sea level was 400’ lower than it is today. The Albemarle River flowed through the heart of what is now Kitty Hawk, digging a channel that still exists. Evidence of that is the coarse grained sand that is typical of the beach in that area. Aerial photography and geological studies also confirm the existence of an ancient river bed.

That ancient river bed focusses the energy of the waves into what was once the channel—which is also why the surfing tends to be a little better in that area. Especially during storms or high seas, the force of those waves is concentrated into a relatively narrow area—with obvious results.

There have been some calls to abandon that stretch of road, to allow the forces of nature to run its course. That is unacceptable, short-sighted and simply wrong.

Unlike the S Curves or New Inlet on Pea Island where plans exist to move the road to the west, the Beach Road—NC12—is in the heart of a populated, developed town. There is no alternative route, it cannot be moved to the west and abandoning it would be to abandon homes, businesses, property and the dreams of the people who live there. It would also send a message of despair, clearly stating that the town of Kitty Hawk is not interested in maintaining its beach front properties—a statement that would certainly be noticed by banks, builders and anyone thinking of buying property in the town.

Kitty Hawk has signed on to the Dare County interlocal agreement to nourish its beaches and there is ample evidence that nourishment works and works well even in extreme conditions.

Beach nourishment was used to protect the S Curves last year, and as homes and businesses were being threatened and asphalt was crushed in Kitty Hawk, the S Curves remained open throughout that cycled of storms. For anyone who has lived on the Outer Banks for any length of time, that is noteworthy and remarkable.

Until Nags Head nourished its beach, South Nags Head was one of the most dynamic and threatened communities on the Outer Banks. The biggest complaint now is that property owners sometimes have too much sand in their yards. A legitimate concern, but it pales before the damage a foot of seawater can do to a home.

The north end of Buxton is taking a beating right now, and the County, in cooperation with the National Park Service is trying to expedite the beach nourishment permitting process to help the town. It rather begs the question, could Kitty Hawk do the same thing to preserve its heritage and beach?