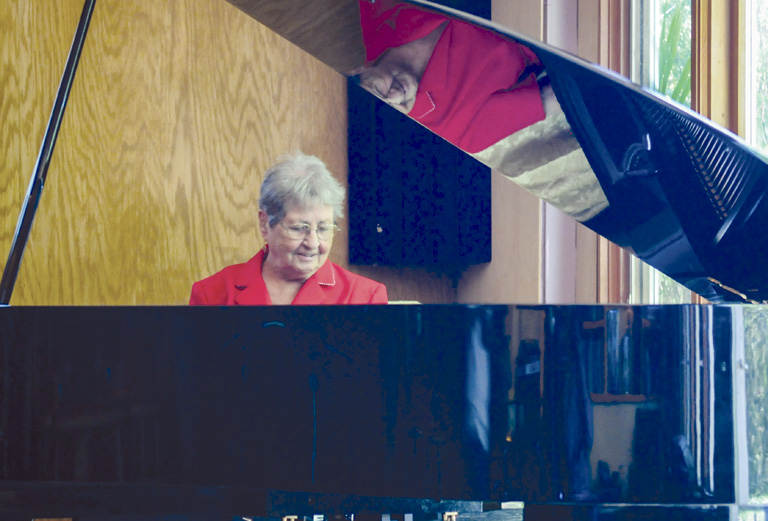 Camilla Piasecki at the piano.

While shopping in Food Lion, my daughter and I breezed over to check out the sample table manned by a lady wearing a pin-accented ball cap. Her smile and the spark in her eyes drew us as much as the spread-adorned crackers. “I’m Camilla,” she ventured.

As snacking turned to chatting, her nimble hands seemed to fly over a hat she was knitting. Camilla Piasecki takes her handmade apparel to church to be donated where needed. “My friends are always giving me their left over yarn,” she explained. Intrigued, I asked about the gold treble clef pin and found out needle work is a minor talent for this octogenarian.

A lifetime musician, her mother, a pianist, sent her for lessons with the preacher’s wife at an early age. A bit triumphantly, Camilla observed, “By the time I was 8, I could outplay my mother.”

“In elementary school, I was in the Dixieland Minstrel and anything else that had anything to do with music,” Camilla recalled. In high school she performed as much music as she could, still playing the piano and also singing in the glee club. After a year at East Carolina University, then a short stint at the St. Louis Conservatory, Camilla came home. Her teacher at the conservatory made it clear, “Camilla, you can already play better than any of us here.”

As we talked, a store worker walked over. “There you are, Mrs. P!” he said as he came over to get a hug.

Then back to us without missing a beat. “Ya know, I played at the first Pirate’s Jamboree down here at the Old Nags Header Motel. Years ago, I saw the picture of our five piece band with the caption ‘players unknown’ under it.” Mrs. P righted that omission with a visit the Outer Banks History Center as the only living musician from the photo.

The “Performer” then recounted how she played during WWII, when she was 13 or 14 years old, because “someone had to, as all the men were off to war.” Bending toward me in punctuation, she talked about her 20 years as a member of the Atlanta Southernaires, performing music during the big band era, and her presence here on the Outer Banks. “I played the piano bars at all the restaurants up and down this beach,” says Camilla, naming off The Carolinian Hotel and The Casino.

Another memory pops and we’re off. “It was just me and 200 men,” Camilla asserted, knowing how that sounds, she laughed, adding, “And their wives!” With another chuckle, she explained, “I played for The Annual Seaboard Convention.” With a finger cadence landing in perfect tempo she adds, “I played anything they asked.”

I listened on about teaching piano from 1953 to 1972 and the many years she made weekly trips to mentor her town’s high school jazz band.

Today a handful of life affirming activities, arranged like notes in a score, motivate this lively virtuoso. One is the job where we met. Another is charity work.

A third, and perhaps part of her living legacy, is what she offers to those of her own generation. “Cam” is her nickname when she volunteers at the local nursing homes in her area. “There’s not a song they call out that I can’t play,” said Camilla, her hands still stitching, her animated face engaged. “I don’t just go there to play, but to reminisce, talk and such, ’cause we are from the same era.”

She pointed to the word “Stuff” embroidered on her hat. “That’s what my husband Ray used to call me. He was the greatest man in the world.” I then heard of a 54-year love story and how their love lives on through their son, grandchildren and great-grandchildren.

She concludes, “They squabble over who will get to care for me when I get older.”

The conversation ends with a yet another smile, as Camilla, like an accomplished maestro moves me with her last tale of the day. “Ya wanna know what gets me up in the morning?” I lean in, with baited breath, hoping for wisdom to wash over me. “Socks!” she quips, with a Cheshire-like grin about her cat, a rescued ferrel kitten.