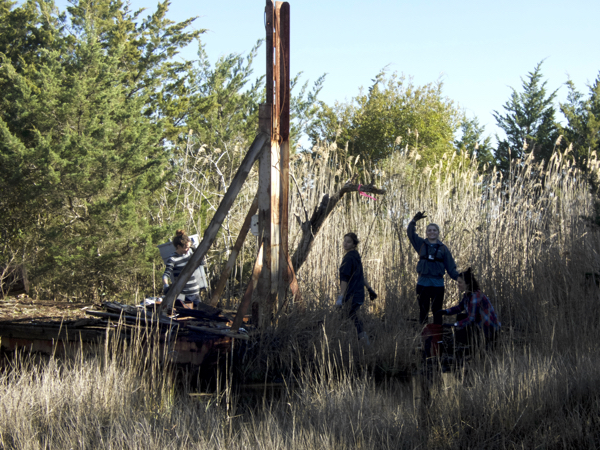 One item that did not get cleaned up. No one is quite sure how long the barge has been there or how it came to rest in the marsh. Photo Kip Tabb

There is no way to know how many years the debris of the Outer Banks has been pushed to the marsh at the north end of Wanchese Harbor. It’s a small spit of land, maybe an acre and a half that protects the docks from the wind and open waters of Roanoke Sound.

Sticking out as it does, that little spit of land has become the depository for everything that the gets pushed across the sound. “Storm surge brings everything into the marsh there,” Ladd Bayliss, Coastal Advocate at the North Carolina Coastal Federation Manteo office said.

For the past three years, the Coastal Federation has sponsored a shoreline cleanup in January. The cleanup is a kickoff for a larger derelict crab pot project that the Federation funds through a NOAA grant.

The first two years volunteers descended on the north end of Roanoke Island. This year, 45 volunteers slipped on rubber boots, grabbed some gloves and got to work. Two and a half hours later, jeans covered in mud, garbage bags filled with plastic bottles and smaller debris filled a commercial dumpster provided by Dare County.

There was more than just plastic bottles. There were floor mats buried under the mud, a couple of fish cleaning table turned up; sheets of plastic and coolers were also part of the debris. The coolers really highlights how much impact on the environment human activity can have.

Filled with styrofoam, the insulation had broken apart and was buried everywhere in the marsh and even into the trees along some of the ridges. The styrofoam did not come from just the coolers, though, and the sheer amount that was found was startling and concerning.

The weather certainly cooperated on Saturday with bright sunshine and mild temperatures.

Nonetheless, conditions were not pleasant. Even with planks laid down over the muck, it was common to sink to mid calf. Briars were everywhere and it was necessary to reach through them to get to some of the debris.

The reward for all that work? A much cleaner marsh, pizza, soda and beer.