Bush League: The Show on the Outer Banks 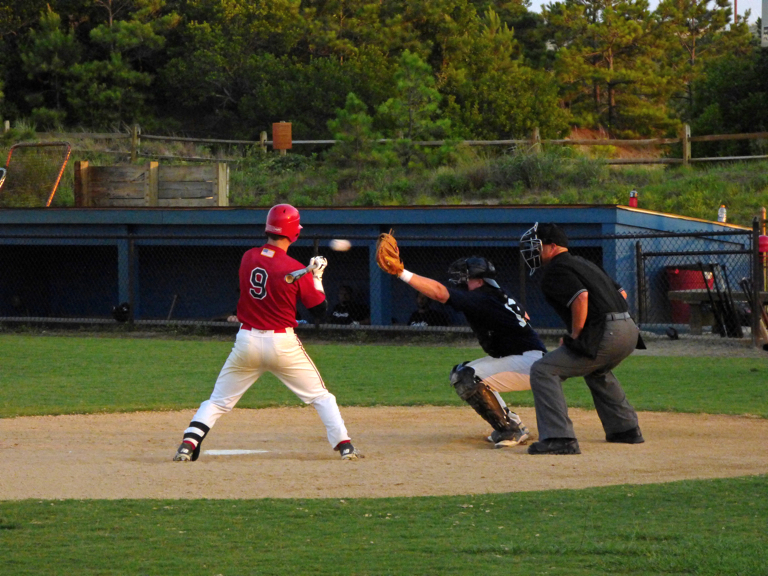 A little chin music for Tyler Franko of the Outer Banks Daredevils hailing from Iowa Central Community College. The July 8 game ended in a 9-4 victory over  the visiting Greenbrier Knights.

Once upon a time the Bush Leagues really were out in the bushes—far away from urban centers, the manicured infields and big league stadiums of the major league baseball teams.

None of us are really out in the bushes anymore. From just about any place in this country, a major league ballpark is at most a day’s drive away.

Yet the road from backyard ball to the big leagues is just as long and difficult today as it ever was—and it is that dream of traveling the highway from obscurity to the Major Leagues that is at the heart of David Menzies’ Bush League: the Show.

To Menzies and his production partner Matt Noonan, baseball is at the heart of the American image—a sport that is rooted in our pastoral history, it captures the imagination through it’s extraordinary merging of athleticism, strategy and teamwork.

The best played baseball games are in the big league ballparks, places like Yankee Stadium, or Fenway Park, or Busch Stadium. But the best place to see a ballgame is in the small cities and towns of America where our national pastime is a piece of community pride and commitment.

“I always marveled at how minor league games were a community event,” Menzies said.

The Daredevils, who play their games at the First Flight High School ball field in Kill Devil Hills, are not even at the minor league level. Playing in the Tidewater Summer League, the teams are made up of college kids honing their skills and hoping a major league scout will notice them.

To the partners, the Outer Banks epitomized that ideal of baseball and the community. Both men and their families have been vacationing on the Outer Banks for years and they had come to understand that away from the crush of summertime traffic and the frenzy of a July or August afternoon, there is something special about this area.

“It (the Outer Banks) is really made up of people who look out for one another,” Menzies said.

To Menzies that spirit of community combined with families taking the ballplayers in for the summer created a compelling story.

Aware of what was being produced for reality TV, Menzies and Noonan were convinced they could create something with more substance and meaning. “You see some of those reality shows and you wonder how did those . . . shows get on the air?” Menzies asked.

Menzies who now owns a public relations firm—Menzies Consulting—had at one time worked as a commercial videographer, so he understood how to go about putting together a professional quality product. Working with Noonan, they developed a concept for the show.

“We did some research and made the decision to put together Bush League: The Show,” he said.

They took their idea to some producers and got some positive feedback. “They felt the show has some legs,” Menzies said. But they’re timing was a little bit off. The producers had just finished with a trade show where they made their decisions for the coming year.

“They told us to put together a web series, then come back to them,” Menzies said.

After spending a week on the Outer Banks, the partners found the cooperation of the Outer Banks community was a gold mine. “We’ve got about ten times more footage than we thought we would get,” Menzies noted.

Nonetheless, the production team is coming back next week to wrap up filming. If all goes according to schedule, Bush League: The Show will make its debut as a webcast in late August or early September.