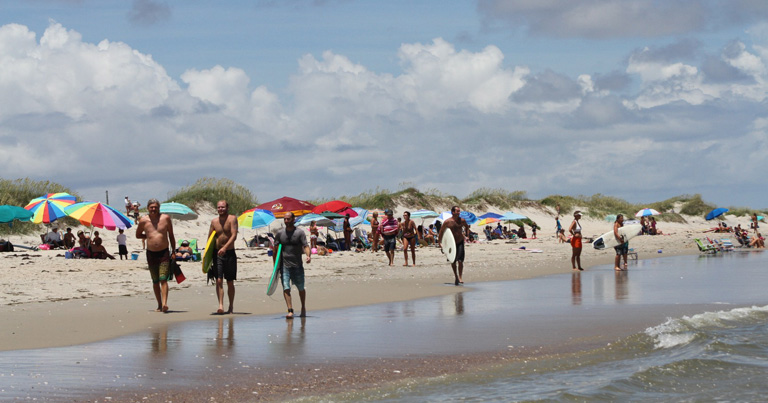 Beach goers at Ranger Station inlet. Everybody from families to fishermen to surfers.

As we’re approaching the one year anniversary of ”Irene”, one of the worst hurricanes to cross the Outer Banks in modern times, I’m reminded of the events leading up to that week in August 2011.

First, there was the anticipation of surf that never really materialized. Then there was storm preparation, shopping for water, non perishable foods, batteries and candles. Following that was the mad dash to the ABC store that was rumored to be closing early. Next on the list was boarding up the windows, gassing the cars and tying down anything in the yard that might blow away. Finally there was the anxiety of out-of-town family members worried about our decision to ride out what was beginning to look like a direct hit (which it was).

Irene walloped Dare County with high winds, heavy surf and a sound side tidal surge that caught a lot of people off guard.

The town of Manteo reported water as deep as eight feet in some areas, and there is still heaps of rebuilding being done in the areas of Rodanthe, Salvo and Waves. 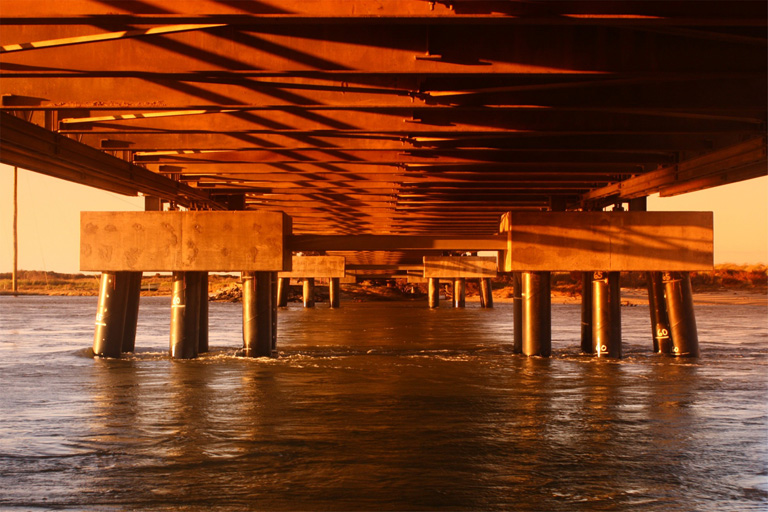 Underside of the "temporary" bridge at the Ranger Station inlet.

Outside of the structural damage that occurred on August 27th, was the coastal carnage that was caused by dune breaches at the s-turns and the Pea Island maintenance station, or as it is called, the ranger station, another five miles to the north. Bulldozing and sand bags were able to shore up the dunes at s-turns in just a few weeks but the maintenance station was another story. A few days of tidal changes through the new cut, and it was deemed too deep to fill. It was 51 days before a temporary bridge was completed to allow for normal traffic flow in and out of the towns south of the new inlet.

While clouds don’t always have a silver lining, this is where our story finds one.

Out of all the hardships that Irene’s winds and waves caused, has grown what almost seems like a new beach park. Although there are no paved parking lots, boardwalk dune crossovers or showers at the New Inlet, as it has come to be called, it has still become a magnet for beach lovers of all types.

In recent weekend trips, I’ve seen them all. There were people fishing the inlet and back towards the sound. I’ve seen kayakers paddling under and around the bridge, shell collectors wading in the shallows and families lined up under umbrellas watching the biggest attraction out there, which has been the action in the surf.

With the outflow of sand from the sound, the bars have settled into a very consistent break for a variety of skill levels. On the inside and into the inlet are perfect beginner waves of whitewater for the little ones on boogie and beater boards to work on their paddling and pop-up skills.

Further offshore to the outside break, there is enough hard-packed sand to keep even the established pros smiling on a 3-foot wave. With every swell that rolled through this summer, there have been a growing number of local and traveling surf families enjoying this new aquatic playground. As peak hurricane season approaches, I know there are a lot more surfers waiting to see how an overhead swell will react with the shallow sand.

How long this new inlet will last is anyone’s guess. Born of one storm, the next one could just as boldly fill it in. I read a piece a while back at the Duck Research Pier on the history of inlets around the Outer Banks. It stated that in the last two hundred years, fourteen inlets north of Cape Lookout had come and gone with only six remaining open at present.

I certainly hope number fifteen hangs in there for awhile.