Blackbeard: The Man & The Myth 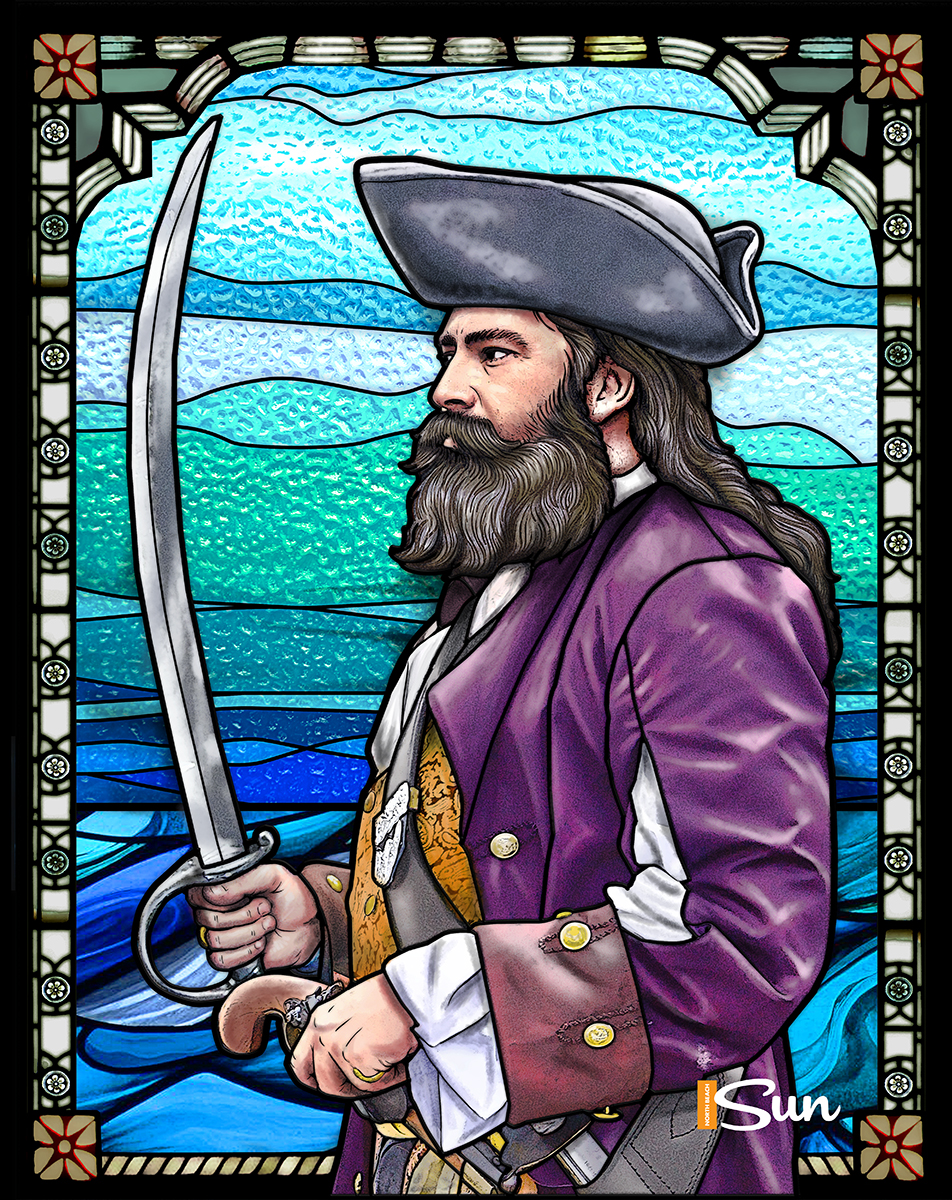 If you’ve ever heard a pirate story, you know Blackbeard.

In fact, that name alone probably conjures up a specific image: something woodcut, ferocious and timeworn. Blackbeard, depicted onboard a ship, or with the sea just behind him – complete with a cutlass in hand, his signature long, dark beard and a defiant glare.

You also probably know Blackbeard’s story specifically – or at least some version of it. One of (if not the) most fearsome pirates of all time, he amassed gold (and, reportedly, wives) with impunity in the Caribbean and along the shores of colonial North America during the 18th century, until he was beheaded by British naval forces in the Pamlico Sound near Ocracoke Island – leaving behind an enormous treasure that’s still mysteriously missing.

It’s a compelling account for many reasons, not least of all because it smacks of daredevil adventures on the high seas mixed with a dash of romance and plenty of intrigue. But perhaps the most interesting thing about Blackbeard and these types of enduring narratives – which appear to be more fictional than anything else – is that they’ve inspired a public fascination with him that’s been ongoing for 300 years now.

While there’s no doubt that a person known as Blackbeard actually existed, many people are surprised to learn that the verifiable facts about him and his exploits during what’s now known as the Golden Age of Piracy barely amount to more than a historical footnote. 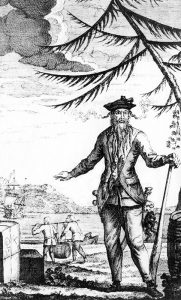 Blackbeard never sat for a portrait (that we know of), so artists have been imagining his image since the early 1700s. Image courtesy of the Outer Banks History Center.

Over the years, various scholars and other writers (many of whom were decidedly inclined to take creative liberties in place of known facts), have suggested that Blackbeard hailed from places as far-flung as England, Jamaica and Philadelphia – but the truth is that there’s no conclusive evidence to support any of those theories.

Not only are his origins obscure, but even his supposed original name is dubious at best. Though numerous present-day accounts insist that he was known as Edward Teach before his reputation earned him the moniker “Blackbeard,” his first historically documented appearance is as Edward “Thatch” in 1716.

Bearing in mind that standardized spelling was virtually nonexistent at the time (Samuel Johnson’s A Dictionary of the English Language, the first widely accepted dictionary, wasn’t published until almost four decades later in 1755), it should come as no surprise that several other forms of that surname (including “Tach” and “Thache”) exist – and many people have since suggested that all of those variations could have simply been other aliases anyway.

And as for Blackbeard’s bloodthirsty reign of terror? Truth be told, the historical records only support the fact that his piratical career lasted less than two years (from late 1716 until his death on November 22, 1718) – and there is absolutely no evidence that he killed, or even harmed, a single person prior to that fateful, final battle on Ocracoke.

The stories about Blackbeard are legion. From books to movies, his life has been immortalized in a countless number of ways. But while it may be tempting to chalk that up entirely to modern-day amusements, the fact of the matter is that Blackbeard was already in the process of being mythologized during his lifetime.

Some of this can almost undoubtedly be attributed to the Boston News-Letter. Though the News-Letter wasn’t the first newspaper printed in the North American colonies, it does have the distinction of being the first continuously published American newspaper.

Albeit with a limited circulation, the News-Letter was printed on a weekly basis from 1704 to 1776, and it was one of the very first publications to make Blackbeard’s name headline news – particularly after publishing an account of his sensational death at the hands of British forces led by Lieutenant Robert Maynard.

Then, just as now, a thrilling story of piratical battles was enough to spark people’s imaginations – enough so that even a then-teenaged Benjamin Franklin subsequently penned a ballad about Blackbeard’s downfall to (profitably) sell on the streets of Boston. 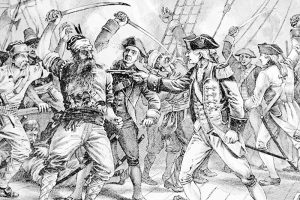 An artist’s rendering of the battle between Blackbeard’s crew and British naval forces on Ocracoke. Image courtesy of the Outer Banks History Center.

And that’s only the tip of the iceberg in terms of the stories that have accumulated (for monetary reasons and otherwise) around Blackbeard over the years – particularly on the Outer Banks. Ask nearly anyone who’s lived in this area long enough, and you’ll hear tales that Blackbeard’s headless corpse inexplicably swam around Maynard’s ship three to seven times before it sank, and more than a few locals will swear to having seen a ghostly light lingering on the waters off of Ocracoke (which is said to be Blackbeard’s soul restlessly searching for either his treasure or his head – take your pick).

As for that treasure: Whether it’s ultimately real or imagined, there’s no record that anything remotely matching that description has ever been found. According to some of the lore, that’s because Blackbeard made a pact with the Devil stating that only the two of them would know where it was hidden – and only the one who lived the longest could claim it as his  due prize.

In the Deep: Another Footnote

But just when it seems as though we should be able to close the case on Blackbeard, another chapter comes to light. In 1996, a private salvage company based out of Florida discovered a shipwreck in the waters near present-day Beaufort, North Carolina.

Almost from the start, there was speculation that it could be Blackbeard’s short-lived, 40-gun flagship, the Queen Anne’s Revenge (which he reportedly sailed for less than a year before he ran it aground in June of 1718, six months before his death on Ocracoke).

Although divers from the North Carolina Department of Natural and Cultural Resources (NCDNCR) began excavating the wreck in 1998, and the site was placed on the U.S. National Register of Historic Places in 2004, it wasn’t officially authenticated as Blackbeard’s Queen Anne until 2011.

So far, hundreds of thousands of artifacts have been recovered from the Queen Anne, including apothecary weights, a copper-alloy sword guard, small amounts of gold mixed with lead shot, medical syringes, cannons and one of the ship’s nearly 3,000-pound anchors.

To this day, joint research and further conservation efforts are still ongoing under the direction of the NCDNCR, and 2018 not only marks the 300th anniversary of the Queen Anne’s demise, but Blackbeard’s as well.

While that’s almost certainly a less-than-satisfactory ending, it may also be a fitting one. Perhaps the real lesson we can learn from Blackbeard is that a book comprised of sagas both real and fanciful, which combine both myth and man, can’t ever truly be closed.

At least, that is, for now.