Beauty & the Beast at RIFP 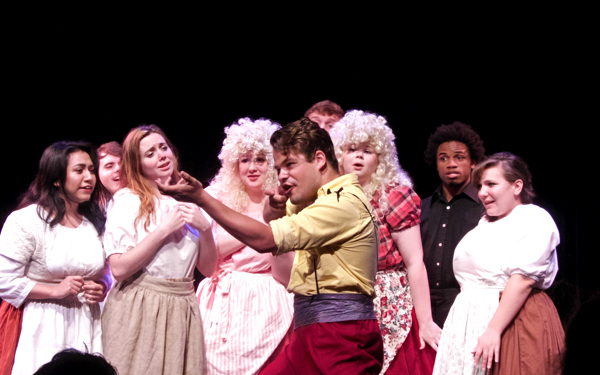 Zachary Pfrimmer as Gaston explaining to his adoring fans the nuances of hunting.

Our imaginations can take us on wonderful journeys and the performance of Beauty and the Beast by the University of Greensboro Student Opera Company took the audience on a trip to a land of magic, castles and dreams that can come true.

Performed at the indoor theater at Roanoke Island Festival Park, the production is the first of a series of children’s plays offered at the park this summer.

The performance itself was outstanding. Shelby Thiedeman as Belle was sweet and charming; Gaston as played by Zachary Pfrimmer was selfish, conceited and thoroughly unlikeable—which he is supposed to be; and Derek Jackenheimer as the Beast was huge and menacing but becomes a sympathetic and heroic character as the play progresses. Also kudos to pianist Emily Russ—a nice light touch on the piano; a marvelous accompaniment.

This is a play that is perfect for kids, and seeing little girls come to the show dressed as Belle—who is a strong independent woman—is a reminder of the impact the play and the movie have had on children. 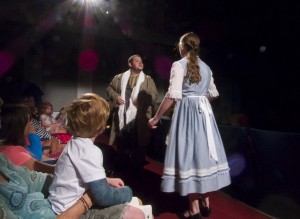 Belle confronting Le Feu about her father’s scarf. Action taking place in the middle of the audience.

A particularly nice feature of this production is that much of the action actually takes place off the stage and in the audience, especially in the center aisle between the balcony seating and the front rows. One of the most touching moments comes when Belle sits at the front of the stage and sings directly to the front seats of the theater. The feeling of awe and wonder from the little girls that were lucky enough to be seated there seems to add to the magic of the show.

There is very little scenery used, so that the audience does have to use their imagination, yet the acting, vocals—especially the vocals—and costumes are so good that the story and play become compelling.

A great show, and certainly worth taking the kids. Unfortunately it’s only here through Friday, June 26. However, if the quality of this production is indicative of what is to come in Roanoke Island Festival Park’s Children’s Shows, mark Wednesday, Thursday or Friday off on the calendar and plan on being there.

Tags: Beauty and the BeastBelleroanoke Island Festival ParkUniversity of Greensboro