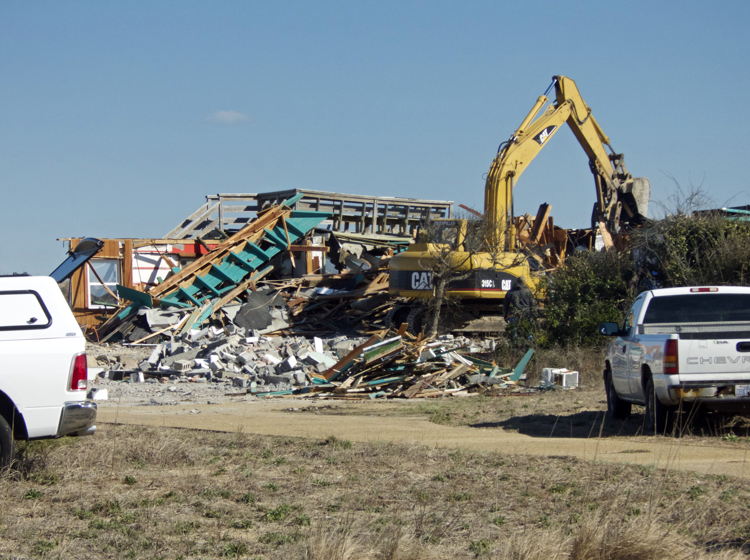 Another Southern Shores flat top has been demolished, its foundation removed and leveled, the concrete blocks and juniper beams broken and carted off to some landfill, the mementos of 60 years or more of family vacations gathered and carefully stored.

In one week or maybe two at the most, it will be as though nothing had ever been at 62 Ocean Boulevard in Southern Shores, and no doubt, the lot will be developed and a new home with more modern amenities, more space and more bedrooms will rise above the dune line.

Built in 1947 Dunne’s Dune was one of the first of the flat tops and it had a number of features including a peaked ceiling in the living room and arched doorways leading from the outside that marked it as different from almost any of the other flat tops.

It is sad that an icon of the history of the Outer Banks is gone, representing a time that may have been simpler and less cluttered—but there is no way to know that. With the advantage of 20/20 hindsight everything seems more certain, less fearful.

The irony in this is that the simple lifestyle that Frank Stick and his son David so carefully nurtured when they began building and marketing their flat tops, sowed the seeds for their destruction. The image of the Outer Banks as the perfect place to flee the cacophony of daily life was powerful and seductive—so much so that now a two or three bedroom cottage on the oceanfront is no longer economically viable, and is certainly incapable of accommodating the needs of the hundreds of thousands of visitors who seek refuge every year by the sea.

It is not always the case, but often the sale of a flat top—especially oceanfront—follows a death in the family. It is sad that another piece of Outer Banks memory falls to the wrecking ball, yet it is difficult to condemn a family who sees the sale of the property as an opportunity for economic independence.

There are market forces at work that make it difficult to hold on to those pieces of our past. The flat tops are just one example of the loss of a piece of Outer Banks history; gone, also, are the cottage courts and the beach box by the sea. As a community, they may have been treasured, but what was done to preserve them?

And therein lies the dilemma. As a community, we crave success, but so often bemoan what success brings us. I do not pretend to know what or how the pieces of Outer Banks history that are so important can be preserved, but it is apparent that if no action is taken, they will exist only in memory and images captured in the lens of a camera.

If the preservation of some part of the history of the Outer Banks is important to this community, then steps have to be taken. If nothing is done, then it is not circumstance nor chance nor luck that will lead to the inevitable loss of those pieces of our past.

If that is the case, there is a quote from Shakespeare that seems very appropriate in this case. “The fault, dear Brutus, is not in our stars, but in ourselves.”