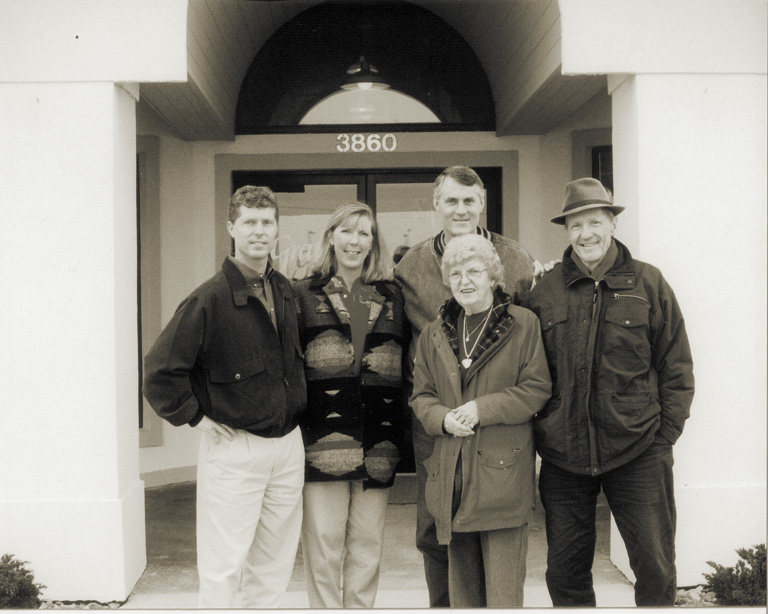 They passed that love of the Outer Banks along to their children; they had five and three of whom have remained—Larry, Ronnie and Julie—now manage Gray’s Department Stores.

“We would take family trips,” Ronnie recalls. “And he would have his Gray’s business cards with the legend of Nags Head printed on the back. He would hand them out to everybody he met.”

“I remember going to Memorial Stadium in Baltimore and they put up on the scoreboard, ‘Welcome Gray’s Department Store from Nags Head.’ It was just Mom and Dad and the five kids,” Julie adds.

But if Walter was the dreamer, it was Estelle who made the dreams come true. “She was the one who kept the family on solid ground,” Julie says. “They were a good combination. Like coffee and cream.”

The tradition of family involvement has grown over the years. “My wife, Susan, has been working with us for 26 years,” Ronnie says.

Their parents passed away a number of years ago—Estelle in 2001 and Walter in 2004, but the couple was able to witness the growth of their single store into the icon of Outer Banks business it has become today.

“My dad told me once, ‘Your mom and I are so proud of you children for what you have done,’” Ronnie says.

Although Gray’s has grown far beyond the single Nags Head store of its founders, certain core values still remain. “Our customer base and return base, they’re like family,” Ronnie notes. “A lot of them grew up with us.” He pauses and adds, “We grew up with a lot of them.”

That sense of shared Outer Banks experience remains at the heart of the way the family views their business. “We tell people, ‘Your trip to the Outer Banks isn’t complete without a trip to Gray’s,’” Larry says. As a catch phrase goes, it works because they believe it.