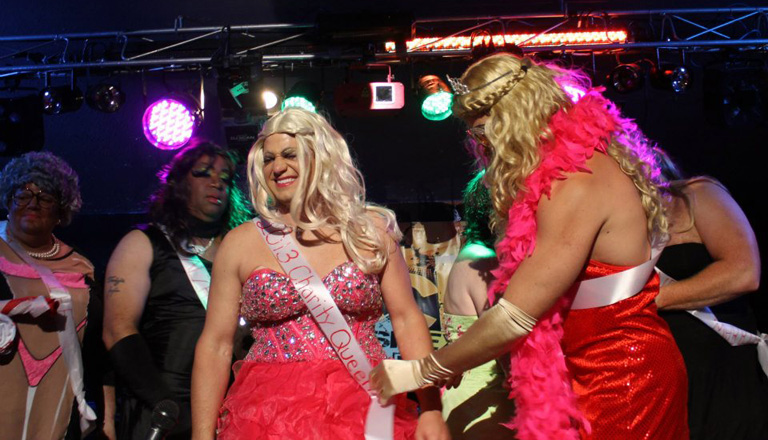 A new queen is crowned. Congratulations to Philonce’ the 2013 Charity Queen of the Outer Banks Womanless Beauty Pageant.

What an amazing weekend on the Outer Banks. The weather wasn’t perfect, but other than that, it was about as good as it gets.  The 11th Annual Bike Week started on Saturday, the First Southern Shores Historic Flat Top Cottage Open House Tour and the 3rd Annual Womanless Beauty Pageant. We’ll write about Bike Week after it’s a complete week, but all the others call for a story of their own.

Bribery as a means of winning a beauty contest has a certain finality and simplicity to it. No subjective scoring from the judges, no false pretense from the contestants—raise the most money and you win.

With that criteria in mind, we are proud to announce Philonce’ (rhymes with Beyonce) is the 2013 Outer Banks Charity Queen of the Third Annual Womanless Beauty Pageant.

By raising over $10,000 for Get Pinked, a grassroots effort sponsored by the Outer Banks Hospital to raise money for breast cancer patients, Phil Foreman owner of Brew Thru—the man behind the wig, makeup and heels—became this year’s reigning queen.

Sponsored by Doug and Joan Brindley of Brindley Beach Vacations—they paid for everything so the entire $50 ticket price went to charity, it truly brought out what is best about the Outer Banks. A bit risqué at times, riotously funny, the evening was nonetheless, touching and emotional.

Held at Kelly’s Outer Banks Tavern in Nags Head, the 11 “ladies” tromped across the stage to a packed house. (Editor’s note: As Cyndi O’Baby last year I was the epitome of grace and charm, allowing me to objectively critique performances.)

These are women who have barely touched their feminine side . . . but it doesn’t stop them from shaking their hips, pursing their lips and dancing in heels. The laughter it evokes is like a tonic for the soul—a moment to remember that sometimes the best way to do a good thing is to laugh at yourself.

Although there are invariably many highlights to any contest, it’s the talent portion of the evening that demonstrates conclusively that a man in women’s clothing is still a man.

Jamie Sparkle– James Skinner part of Brindley Beach when he’s not on stage–and the Sparklettes performed for the Alzheimer’s Foundation of America. They were good . . . really, really good . . . lot’s of energy, a little bit of choreography. They were so good that the crowd started throwing money on stage . . . bills of every denomination, starting a tradition that carried on through the night.

There was Bernidette (Chris Vlahos of Barefoot Bernie’s) performing “I Love Rock and Roll” holding a Guitar Hero guitar and performing for Surfing for Autism. There was Seniorta Chiquita “Banana” Hammock (Jim Snyder) whose “mother” made a surprise appearance for Go Far, a charity that helps kids make healthy choices.

Beneath the laughter, though, was the very real knowledge that this is about something bigger than any individual. Jennay Rump (Attorney BJ McAvoy) sang Dylan’s “Blown in the Wind” for the Wounded Warrior’s Project.

One of the most powerful moment of the night came when Bob Davis took the stage.

He talked about the three years he has been associated with the Womanless Beauty Pageant. He talked about how he and Dave Holton (his escort) were two time cancer survivors. Then he told the crowd that his cancer had come back a third time. A lung cancer, but because it had been diagnosed so early and with an experimental treatment at Duke, the cancer was eradicated in one treatment.

“This is my swan song,” he said as he performed for the last time as Bobbie Roberta. His performance of “Could Have Had It All” for the Relay for Life was powerful and evocative.

There were a lot of people who made this very special evening happen. Cory Taylor came through for the third year as MC; Mike Kelly was very generous with his bar. But the real champion was Dee Buchanan who has organized this event for the past three years and pulled it off without a hitch—or at least without a hitch that anyone can see.

When Frank Stick and his son, David, were building the flat top homes in Southern Shores in the late 1940s and 1950s, their goal was to build the cheapest building they could and sell them as quickly as possible to the WWII vets who were starting families.

It’s really doubtful if they thought the homes would become classics of American architecture; yet they did. And a tour of the homes makes it clear why.

There are certain constants—all of the structures used juniper and concrete blocks. The juniper was a local wood and the concrete could be made from local sand—important considerations in keeping the cost down.

The results are beautiful wood interiors and a construction that was, as one homeowner remarked, “As strong as a military bunker.”

Beyond the similarities in construction materials, there is a wonderful diversity of style and look in these simple structures.

Steve Gudas—who was the organizing force behind the tour, owns an original home that is one of the more simple designs–simple block construction, 9’ ceilings with exposed juniper beams and a narrow hallway. One of the oldest homes on the tour at 162 Ocean Boulevard on the ocean, features a soaring angled ceiling, a walkway with an arch over it connecting to what was probably a servant’s quarters.

There were a couple of duplexes and one of the homes featured a second floor. According to David Stick, that would have been consistent with the original concept of his father—the structures were built with the thought that owners would be able to add extra rooms or a second story.

Attendance far exceeded anyone’s expectations with proceeds going to the Flat Top Preservation Fund. Donations to the fund can be made through the Outer Banks Community Foundation at 252-261-8839.