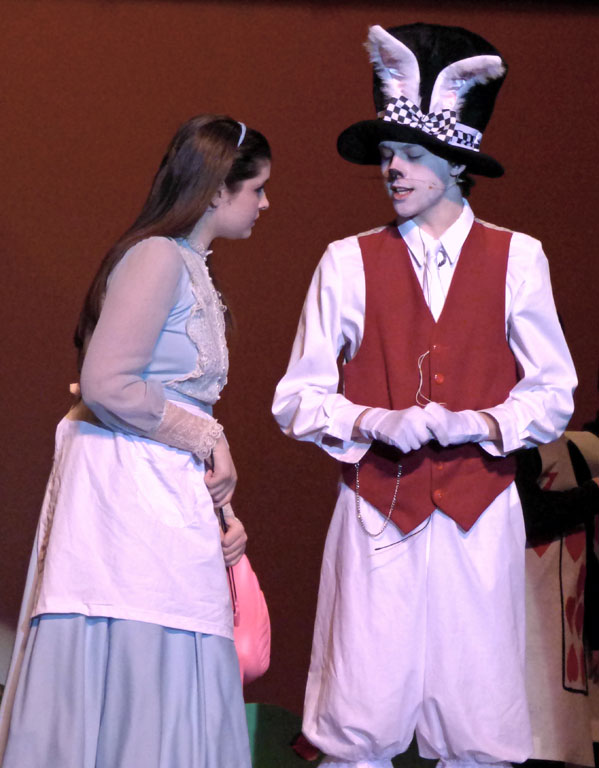 Alice (Maiah Tabb) and the White Rabbit (Sean McGuire) in the First Flight High School production of “Alice in Wonderland.”

Sell the house, sell the boat, trade in the car, but take the kids to see Alice In Wonderland at First Flight High School.

OK—maybe this is a bit of an exaggeration since ticket prices are so reasonable, but this may be one of the best kids shows I have seen.

Before I go any farther, I do want to put a disclaimer in here—the astute reader will note the last name of the reviewer and the young lady who plays Alice are the same. Therefore, in the interests of journalistic integrity, I will not call attention to the extraordinary skill and poise Maiah Tabb brought to the role. I will instead, focus on an evening of theatre magic that will appeal to kids and keep adults engaged.

The magic starts with the set designs that were colorful and whimsical and framed the scenes but never dominated. Big kudos here to the tech crew for getting all the changes done as quickly as they did. I lost count somewhere around 10 scenes, but somehow they got everything out in what the audience saw as seamless.

And then there’s the acting. Not a weak performance to be seen. It was all done with a British accent and the actors held their accents throughout. Given the size of the cast, 31, getting everyone on the same page at the same time must have been a Herculean task; getting everyone to this level of performance is a real tribute to Theatre Teacher Monica DeFilece and assistant director Lauren Deal.

There is not enough room to call out all the outstanding performances but there were a few that really stood out.

Sean McGuire as the White Rabbit seemed to own the role. Annie Sorey as the Cheshire Cat may have redefined that image for me forever. Torie Dalgo was a snarling, “off with their heads” Queen, who never did get her wish, was wonderful. And Rachel Zuhars as the Mock Turtle and Annah Bachman as the Gryphon almost stole the show.

A wonderful evening of entertainment with a show that kids will love.

There are two performances left: tonight at 7:00 p.m. and a Saturday Matinee at 2:00. First Flight High School is located at 100 Veterans Drive in Kill Devil Hills.