A Short Walk On The Boardwalk 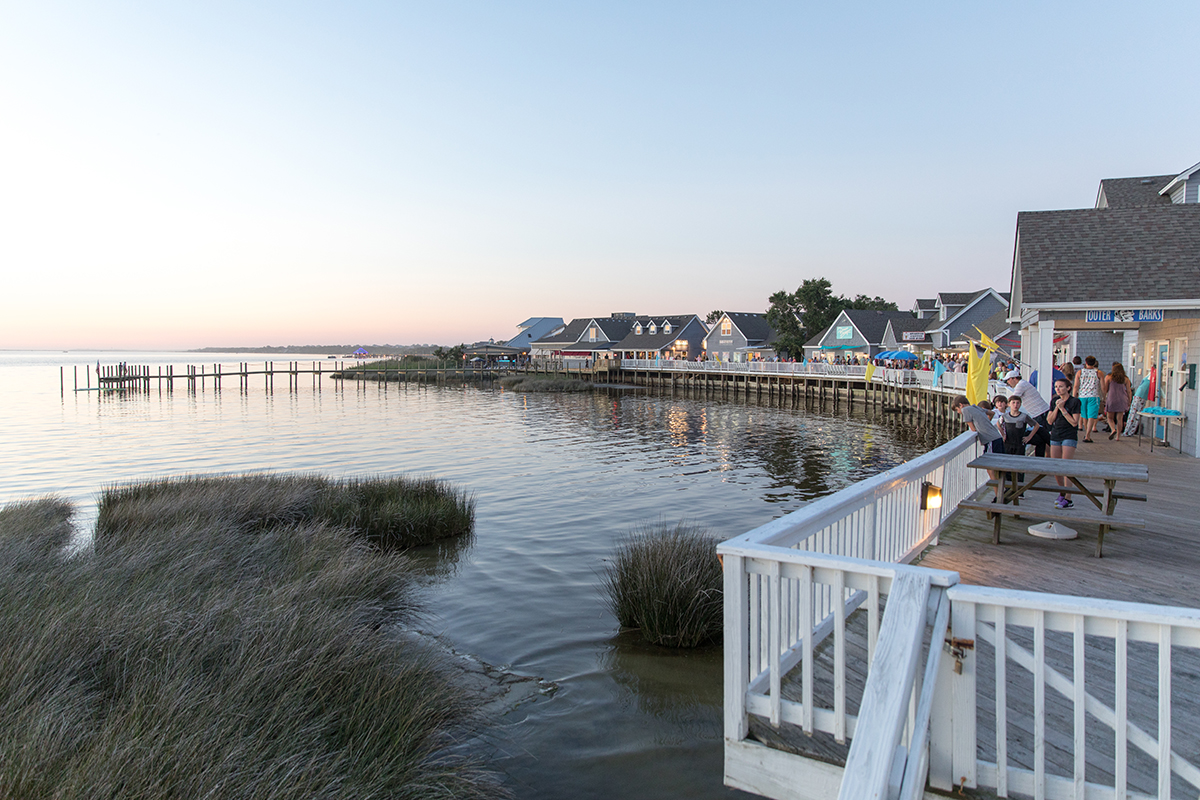 Visitors enjoy the sunset from the Waterfront Shops. All photos by Cory Godwin Productions.

On a balmy afternoon in late July, 10-year-old Leigh Raskin frolicked down the Jersey Shore boardwalk with a slice of pizza in hand. Grinning, she took in the sweet scents of summer – a rich combination of sea salt and funnel cake – as she strolled past the multi-colored storefronts.

Now, more than 20 years later, Leigh sits behind the counter of her own business, Wave Pizza Café, as she watches visitors and locals alike enjoy the Duck soundside boardwalk in a similar fashion.

“The fact that we’re making pizza on a boardwalk, and that’s what we grew up enjoying as kids, feels kind of full circle,” Leigh says. “It’s funny. When I first heard about the idea for the Duck boardwalk, I knew that it would be great for business and for the town as a whole. It’s incredible.”

The concept for the Duck boardwalk emerged in 2003 when town administrators were entertaining the idea of providing pedestrians with an alternative way to traverse Duck, recognizing the congestion on both N.C. 12 and the multi-use path through the village.

“As everyone knows, the multi-use path here in Duck is very high-volume in the summer. It actually has urban numbers of people using it during those months, so in order to provide a safer way for people to move through the village we came up with the concept of the boardwalk,” says Town Manager Chris Layton. “But when we first proposed the concept, we knew that it wasn’t something that was going to happen overnight.” 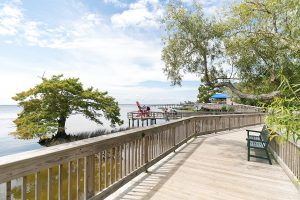 The first phase of the boardwalk’s construction began in the spring of 2007 in tandem with the new Duck Town Park project. By making the first section of the boardwalk part of the park, town planners minimized costs and eliminated an initial need for property easements.

“That phase was completed in 2008,” Chris explains. “After that, we had to figure out how we were going to pay for the rest of the project, and we had to get easements from the property owners.”

Once the town secured the 24 necessary easements, phases two, three and four of the Duck boardwalk came to life. With the help of grants from the Outer Banks Visitors Bureau, the North Carolina Department of Environmental Quality and the Parks and Recreation Trust Fund, the project was finally completed in 2014 for a total of $1,530,770.

Extending 3,386 linear feet from Aqua Restaurant and Spa at the south end of the village to the northernmost Waterfront Shops, the boardwalk has transformed the town. For business owners such as Leigh, the boardwalk offers increased foot traffic, visibility, and most importantly, new opportunities.

“We’ve started doing live music, and we’ve also added beer taps,” Leigh says. “That might not have happened if the boardwalk wasn’t here. There’s so much more foot traffic now.”

Before the boardwalk, declarations such as “we didn’t know you were here” seemed to be a daily occurrence for many owners and employees of soundside businesses tucked away in busy shopping centers.

“The soundside of the Waterfront Shops felt a bit like a dead end,” says Candy & Corks owner, Kate Harvey. “The boardwalk gave people a whole other point of access to the shops. Customers started coming in through the back door instead of just through the front.” 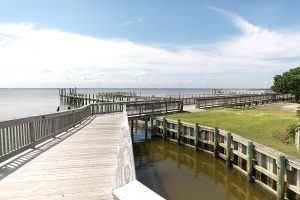 The Duck boardwalk also highlights what many consider an untapped resource on the Outer Banks: the Currituck Sound. From sunset strolls to bar crawls by boat, the boardwalk allows visitors to experience more than just the beach while on vacation.

“When people come to the Outer Banks they tend to focus on the ocean, but the sounds have so much to offer,” Chris says. “The boardwalk allows people to see that, especially at sunset.”

Not only has the boardwalk changed business models, it has also altered the way businesses interact with each other, fostering a sense of community throughout Duck.

“It really does physically connect shop owners and people and it’s amazing,” Leigh says. “I’ve gotten to know other people and other businesses because we’re so easily accessible now. We’re not limited to our own little shopping centers anymore.”

Moving forward, the Town of Duck plans to combat minor issues associated with both the boardwalk and the village, such as congested walkways, limited parking, signage and lessened exposure to east side businesses. Still in its planning stages, the Comprehensive Pedestrian Plan will reconfigure sidewalks throughout Duck to create a better balance among pedestrians, vehicles and businesses.

But while the future may hold an opportunity for expanding the boardwalk, for now, business owners are delighted with the present. “It’s opened up this whole side of Duck that most people wouldn’t have seen otherwise,” says Kate. “This whole place is connected, and it’s just giving people another reason to come and enjoy it.”