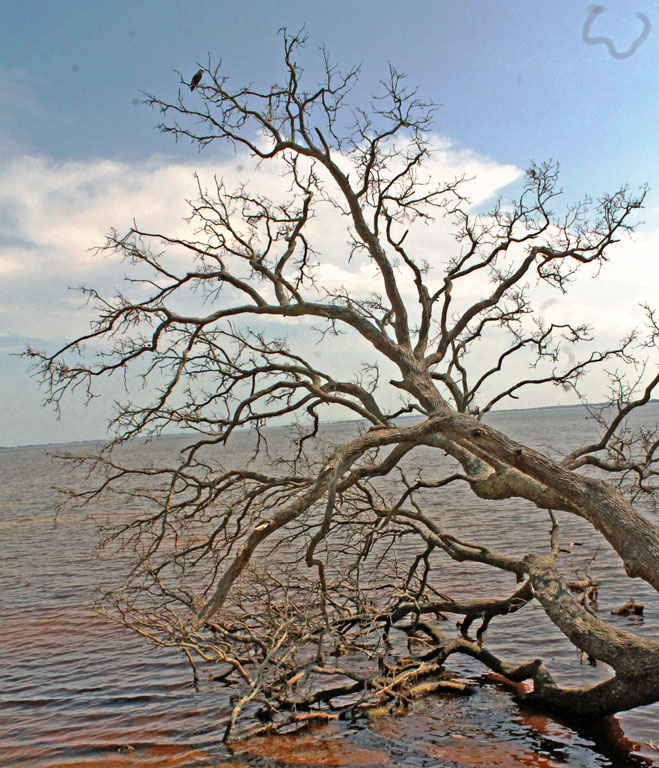 Western beach of Nags Head Woods. The deadfall of trees on the beach is indicative of a rapid erosion of the beach. As the beach erodes, trees that have taken root in the highlands of the bank cannot survive.

The waters of the oceans have never been a constant. There have always been fluctuations where coastlines meet the sea, whether the waters are retreating or rising. Those fluctuations, though have occurred over millennia–over thousands of years, and what we are seeing as the 21st century unfolds is something that appears to be unique.

The oceans of the world are rising faster than any rate ever measured. People can debate the why behind the rising waters, but every measurement we have tells the same story.

A blue ribbon panel of NC coastal processes experts concluded in their 2010, “A one meter (39 inch rise) is considered likely . . . by the year 2100.” The report prepared for the N.C. Coastal Resources Commission was subsequently disavowed by the NC State Legislature, leading the legislature to declare that the term “sea level rise” was not to be used in state government coastal planning documents.

Yet denying the use of the term does not change the reality that every tidal gauge examined in the state from Southport to Duck indicated a clear sea level rise (SLR).

There are variables–waters north of Cape Lookout are rising faster than southern waters–and the projected rise is not a straight line projection. Spencer Rogers, Coastal Construction & Erosion Specialist of North Carolina Sea Grant, points out that at this point a rising ocean is more a fact of scientific measurement than something people can see or sense. “It’s incremental,” he says. “For the first 30 years (until 2040) the rise is only 8” in total.”

The Waters of the Sounds

But there is no doubt that the level of the sea relative to the land is rising.

Which creates an interesting question. If water seeks its own level, are the waters of the sounds also rising?

The short answer is, yes they are. “For most of the Outer Banks,” Rogers says. “It’s actually rising from both sides.”

The longer answer is, yes the waters are rising but it’s complicated.

What is apparent is that there is a fairly rapid rate of erosion in the land surrounding the sounds. What is not clear is if that is related to this incremental SLR or part of a natural process that occurs separate from the rising waters.

The actual rise in the waters closely parallels the ocean but the rate of shoreline erosion along the sounds seems to be more dependent upon wind energy and storms than rising waters.

However, although it is still in the theoretical stages, there is widespread agreement in the scientific community that even incremental SLR will trigger an increase in storm surge. We may be seeing evidence of that in Alligator River National Wildlife Refuge.

In the past two years there have been two very significant storm surge events–Hurricane Irene and Sandy. The result has been that marsh that had been a fresh water environment is now inundated with saltwater and the fresh water plants in some areas are unable to regenerate.

That is a process that has always occurred , according to Christine Pickens, Coastal Restoration and Adaptation Specialist at Nags Head Woods. “It is a natural progression,” she says. What seems to be happening, though, is the transition to saltwater or brackish environment is so rapid that some–not all–of the marshes do not seem to be successfully transitioning.

The Marsh and Erosion

The marsh habitat may be the key to slowing the retreat or erosion along the shores of the Outer Banks sounds.

A marsh exists both horizontally–how far from the shore it extends–and vertically, the thickness of the marsh vegetation and sediments above the sediment floor. Possibly more importantly than the actual thickness is the marshes ability to continue to grow vertically through new the addition of sediment or plant matter from the marsh itself. “Marsh habitats tend to have a slower erosion rate, likely due to the root systems, than other coastal shorelines–sediment bank and swamp forest,” Reide Corbett writes. Corbett is the Coastal Studies Institute Co-Program Head for Coastal Processes and a Professor in the Department of Geological Sciences at ECU.

He points out that the rising waters of the sounds–incremental though they may appear to most people–may have a dramatic effect. “The northern Outer Banks with a SLR of approximately 4mm per year (.16” per year) seems to be near the maximum rise these marsh systems can handle and still maintain their vertical health.”

Working through CSI, Corbett has mapped the entire coast of the North Carolina Sounds–some 10,000 miles of varying habitat. In comparing current mapping images to historic data, the retreat of the shoreline along the sounds becomes apparent.

Seeing the change does not mean we know what the effect will be. Will the Outer Banks, with its high dune lines and mature maritime forests have more protection from the waters of the sounds than the flat expanse of the North Carolina coastal plain? Will we see more significant storm activity over time?

The processes involved are still very much in the first stages of study and questions remain. What no one can be sure about, though, is the exact cause of what we are witnessing–and what that will mean over the course of time.