A Medium of Many Means 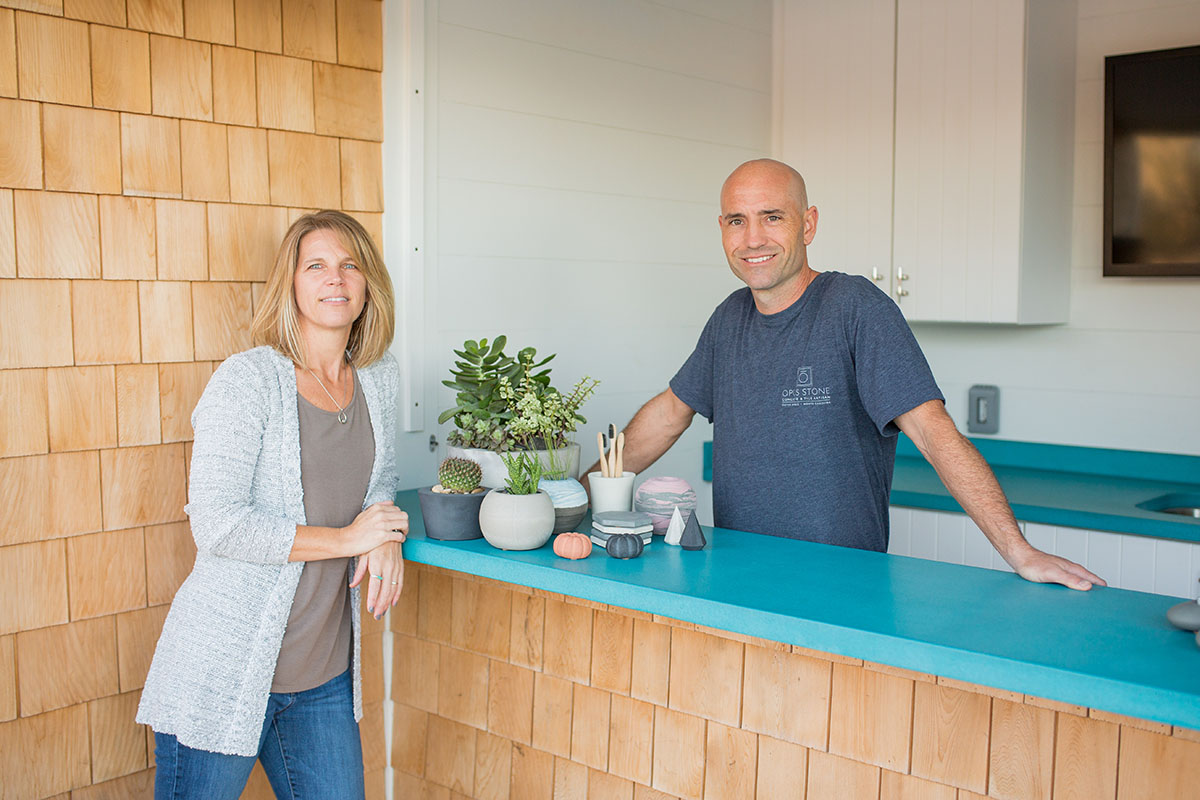 opus: (n) Any artistic work, especially those on a large scale.

When David and Julie Bancroft set about crafting a new piece of work, the possibilities are endless – and the result can be both flexible and lighter than granite. If you guessed some sort of plastic or other processed material, try again.

We’re talking the world of concrete. 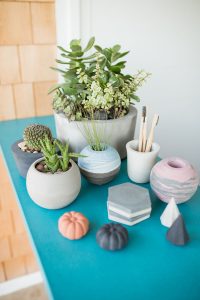 A variety of Julie’s more delicate work – from coasters and planters to ring holders.

But not everyone thinks about using concrete to make pieces of art. Generally speaking, the word alone calls to mind images of loud, crusty trucks churning away while workers put the finishing touches on driveways or sidewalks.

“It’s so much more than that,” Julie explains with a smile. “The medium of concrete has been very popular in Europe and Australia for quite some time. Here in the States, folks tend to think of it as some rough material that will crack and stain, when in actuality it can be made smooth, cool and chic.”

As far as getting people on board? “Well,” she says, “It’s only a matter of changing people’s perspectives.”

And that’s exactly what Julie and David have been doing over the past two years with no employees – just each other, a couple of rubber aprons and the radio on full blast, making it happen.

Although Opus Stone is a relatively new venture, David has an extensive background in the construction industry, and, as Julie explains, he’s always been artistically inclined.

“Anytime he sees something that’s beautiful, he wants to learn how it works,” she says. “And in his field he was constantly noticing spaces that weren’t being used to the best of their ability.”

“I was inspired by seeing how other artisans were beginning to use concrete as a medium,” David adds. “And we wanted to do something different that no one else on the beach has been offering.” 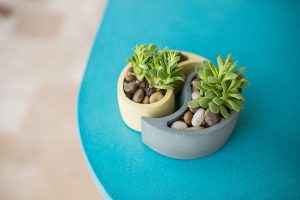 After ruling out a number of schools that were too far away (the couple has two daughters), David finally found The Concrete Countertop Institute, which hosts classes all around the world, but is based out of Raleigh. Taking a leap of faith, the Bancrofts invested heavily in the necessary equipment, and David enrolled in an intensive course at the institute where he was able to work with well-known engineer Jeff Girard – a pioneer in the process of using Glass Fiber Reinforced Concrete (GFRC).

Sounds a bit like a new NASA program, right? Not quite. However, the materials are dynamic enough that the International Space Station could be outfitted with some of the Bancroft handiwork.

“GFRC is lightweight, pliable, and it can literally become whatever you want it to be,” Julie explains. Which is great when one considers how many unique spaces exist in a home and how hard it can be to find the right materials to fill them.

And the process from prep to finish is nothing short of a labor of love.

“Most commonly we’re working on countertops, sinks, benches, tables, hearths or fireplace surrounds,” Julie says. “First we meet with the client to find out what they’re looking for and to choose a color or colors, the thickness and the finish. We can do everything from matte to gloss, and we can even leave it as a creamier finish or grind the surface to expose more of the aggregate for a unique look.” 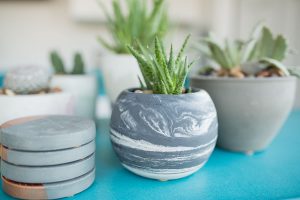 Color combinations are endless, and no two patterns are exactly the same.

The next step involves taking measurements and creating original forms. And from that point forward, the concrete begins to flow.

The first layer in the form is a mist coat, followed by many thin layers of GFRC. When the concrete has cured, the form is removed and the polishing process begins, along with any grouting or acid staining. A final sealant is applied, and voilá! The result is a modern work of art.

Did we mention they can also add things like a glow-in-the-dark detail? Or craft benches that look like real wood?

As with any trade, the early days were filled with lots of trial and error – and perhaps a bit of concrete.

“We actually started out experimenting in our garage,” Julie says with a laugh. “There I was barefoot, covered in concrete with colors flying everywhere. There’s no telling what the neighbors thought we were up to. Thankfully, there were no complaints!”

But now, after a few years, lots of practice and endless research to keep their game on point, David and Julie have put Opus Stone on the forefront of custom home decor. Homes and businesses from one end of the beach to the other are showcasing just how cool and artistic concrete can be. 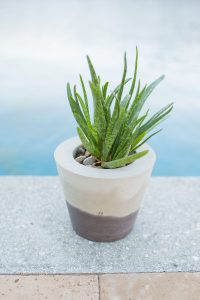 Planters of all shapes and sizes are some of Julie’s most popular pieces.

And it doesn’t end with larger-scale home decor. Julie has even taken it a step further.

“We always have excess uncured concrete lying around,” Julie explains. “And then one day I had this ‘Aha!’ moment. I thought, why can’t we take all this extra material and make something?”

While concrete can be large in character, Julie has shown that it can also be paired down to create delicate pieces for every space, inside and out.

“My first experiment was a little planter,” Julie says. “But I literally look at everything as a mold these days – from silicone and 3-D molds to things I just happen to find in grocery stores, thrift shops and the Dollar Tree. I’ve been able to create everything from soap dishes to trivets, ring holders, wine coolers and all sorts of seasonal home decor.”

At this point Opus Stone has its own Etsy shop and can be found not only in local stores but also in stores as far west as Detroit – and so far they’ve shipped their pieces all over the U.S. and to international locations such as Canada, Norway and Australia. They even have a workshop in Point Harbor that they moved into last May…and they’re already outgrowing it.

Above all, the creativity and passion that David and Julie put into their craft is palpable.

“We love what we do,” Julie says. “We love getting dirty and being covered in concrete. Our clients are always challenging us and pushing us to new limits, and we have new ideas and visions everyday. It’s truly endless – and we’re excited to see where it takes us next!” 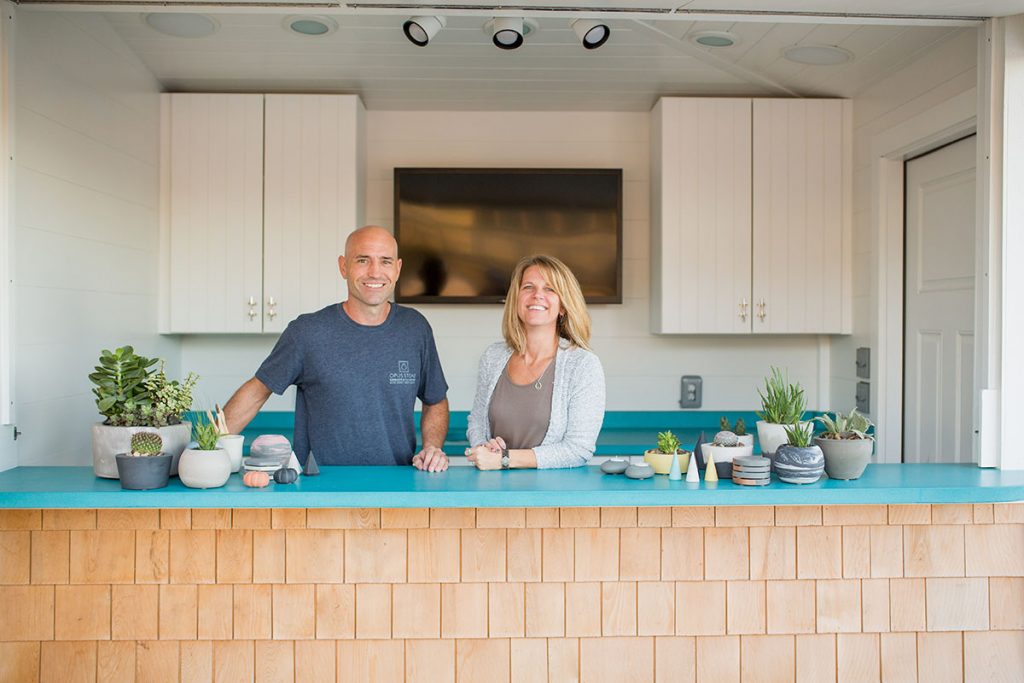