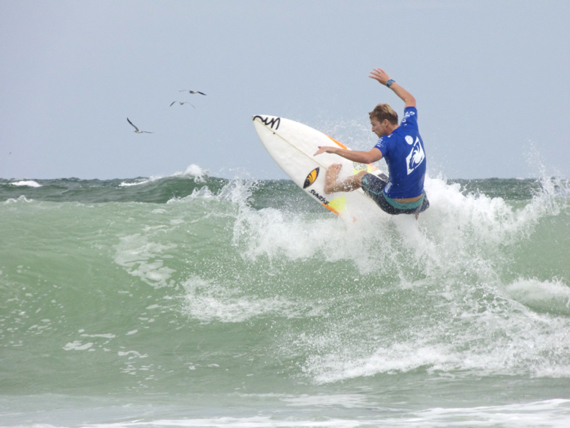 Going up for air at the 2015 WRV Pro World Surf Competition at Jennette’s Pier.

The WRV Pro World Surf Competition at Jennette’s Pier was a great show on the water even if conditions weren’t ideal—considerably less than ideal, actually.

It was the north to northeast winds that blew all week that created conditions that most surfers would have found challenging but when the pros came to town they showed the Outer Banks why they’re the pros.

Although the weather was mild all week, there was a lot of chop to the waves and wave sets seemed hard to read, at least from the beach. Conditions were so difficult that the threat of rip currents and unpredictable surf brought out the red flags for swimming Friday-Sunday.

The competitors, though, were finding some great waves to ride and according to written reports on the race website, competitors indicated the surf had a lot of power behind it.

That showed up in the level of competition with surfers catching air, pulling off some strong cutbacks and getting some good long rides in.

Although it is an international competition with rankings in the World Surf League on the line, the event has become a regular part of the end of the Outer Banks summer season. Walking the beach, there’s a real feeling of a social outing as friends sit along the edge of the surf, watching the competition and catching up on how the summer has been and what the next few weeks will hold.

Jennette’s Pier has become the go to place for surf competitions since it re-opened in 2011. The next competition at the Pier will be the ESA Eastern Surf Competition September 20-26.