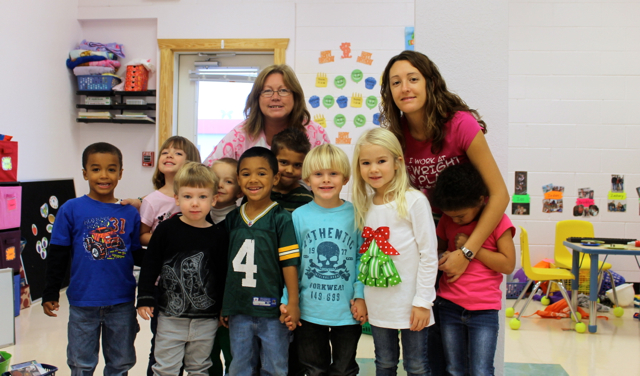 Seven weeks after Hurricane Sandy deposited 18” of water in the classrooms of the Wright Place, the preschool and childcare facility in Kitty Hawk, the doors are open once again and children are filling the classrooms.

Although extensive work had to be done to the classrooms to undo the damage done by the flood waters, the building itself was not damaged. “It was mainly stuff that we had to replace,” Brittany Phillips, Wright Place Director, says. “We had to replace drywall and we had to throw away everything that was in our classrooms and kitchen, but the plumbing, the heating and air conditioning–all that was fine.”

Bringing the school back to life was a community effort Phillips says. “There was a lot of family support. Our families helped–both personal and school families.”

The help was needed. All the books, all the furniture, and all the toys that were in the classrooms were lost.

The first phase of rebuilding the classrooms went quickly. “The water was completely drained by Thursday (November 1), we had inspectors here on Friday and they had all the drywall taken out within a week,” Phillip says.

Then came the hard part–cutting around all the existing fixtures and plumbing and recreating classrooms. Everything seemed to take longer than expected, but after seven weeks, children are once again at the Wright Place.

After a month and a half of being a construction worker, Phillips is looking forward to once again running a preschool and childcare facility. “I’m just relieved to be back,” she says.

Teacher Ann Johnston is a little more upbeat. “It feels wonderful,” she says.