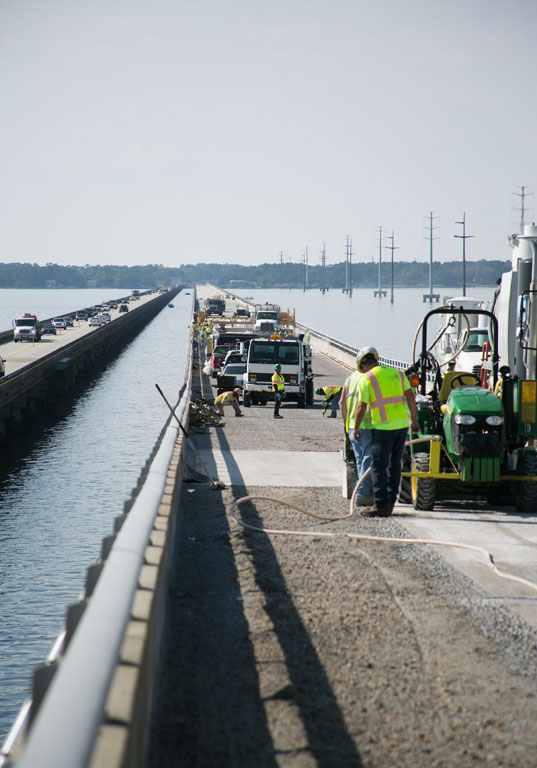 Walking out on the Wright Memorial Bridge the size and scope of the work that is being done hits home. This is a project to refurbish the bridge, not just repave it—an attempt to stave off the ravages of weather and time and add years to the life of the span.

“This is a $6.3 million project,” John Abel, Bridge Construction Supervisor for NCDOT North Carolina District 1, says. “It’s the most expensive bridge repair we’ve ever done in this district, but the replacement cost for a bridge of this length is $200 million, so we think it’s a good investment.”

The process is remarkably complex, and far more involved than may appear at first. The type of pavement that is being used—latex concrete—is relatively new in road construction. Although more expensive than traditional pavements, its lifespan and upkeep is significantly longer.

Getting the bridge ready for laying the product down, though, is a multi-step process, almost a dance of industrial procedure.

The first step is to strip the old surface off and take the concrete underlying it down to a consistent level. Using water saws that shoot a stream of liquid out at 20,000 psi, the old surface is stripped away. It is slow work—walking the saws across the surface, workers can only go as fast as the surface is removed.

It takes huge amounts of water to strip the surface to the roadbed. Water trucks line the bridge, waiting for their turn to fill the tank and keep the process going. The runoff must be recaptured, although in many cases it can be reused. “All the waste water can be reapplied in fields. It has lime in it and gives the fields nutrients,” Abel says. “I’m not sure what the contractor is doing here, if they’re taking it to a wastewater treatment plant.”

That is just the water that is stripping off the concrete. Any water used in other applications must be captured, trucked off the bridge and treated as wastewater.

The whole project is weather dependent. Work stops when winds exceed 20mph, although windscreens have extended that a little bit. The windscreens aren’t all that sophisticated—simply large pieces of plywood, propped up to protect the work area.

There are other weather restrictions as well. Laying pavement is very temperature sensitive and cannot proceed if the temperature falls below 45¢. “It seems to be going well now,” Abel says. “But December, January and February could be a challenge for the contractor.”

Originally, NCDOT thought of the project as a two-year project, but the contractor is projecting one season to finish the work. “We felt like it was going to take two years,” Abel says. “They (the contractor) felt like they could do it in one season if the weather cooperates.”

There are contingency plans in case the weather does not cooperate. The end date for the project is May 15, and no matter what there will be a surface on the bridge suitable for driving. What may take longer to complete will be the expansion joints—the meeting point between the plates of the deck. However, if the driving surface is in place, expansion joints can be completed with lane closures according to Abel.

It is expansion joints that give the bridge its unique up and down ride—especially in the summer when the plates swell in the heat and each section of the deck gets a slight bow to it. “The ride will be better, but you’ll still feel the bridge at each one of these joints,” Abel says.

“It is a safety concern of the Department,” he says. Noting that for a car or pickup truck, the up and down ride of the bridge is not a concern, he adds, “Driving with any kind of trailer. It’s a lot more precarious with something behind you.”

He explains that the purpose of the project is to preserve the bridge. “The contractor understands the reason the Department is doing this is to extend the service life of the bridge,” Abel says. “A byproduct is the increased ride-ability of the surface.”

What About the Old Span? 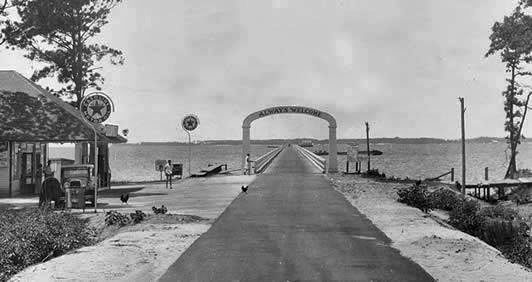 The predecessor to the Wright Memorial Bridge. Wooden span dating from the 1930s.

The work that is being done is on the newer bridge of the twin spans. According to Abel, plans are being formulated to extend the life of the eastbound span that was the first of the bridges completed.

Opened in 1966, the bridge has undergone a thorough inspection this past year. If, as the contractor anticipates, the current work is completed this season, there is a good possibility that work will begin on the older span after the 2014 summer season.