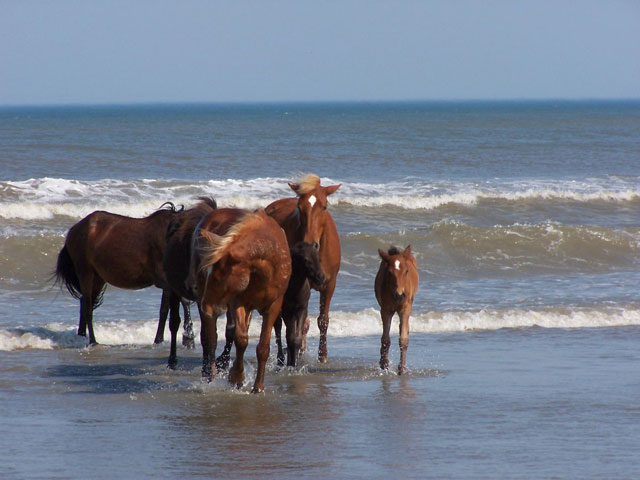 Corolla Wild Horses in the surf.

At one time, almost every barrier island from Virginia and south had a herd of wild horses that had escaped from ships of the Spanish Main. Those herds still exist, but there is only herd that still runs free—the Corolla Wild Horses.

There is a phrase that comes to mind, “With freedom comes responsibility,” and unfortunately the human protectors of that herd too often fail that trust.

The latest example was someone forgot to close the gate between the Carova 4WD beach and the paved section of NC 12 in Corolla. It seems innocuous, innocent, at most a careless moment; but the potential for tragedy is immeasurable. “That’s how the horses get hit,” Corolla Wild Horse Fund Executive Director Karen McCalpin said.

Two horses did get out, and no, they were not hit by a car, but CWHF staff spent the better part of a night rounding up the horses and moving them back to the Carova Beach.

It was the latest example of human interaction with the herd that doesn’t show humans in a particularly good light.

Last year someone fed watermelon to a foal, and the rind, indigestible by the colt’s stomach, wedged in its intestine and in spite of the efforts of veterinarians, it died a horrible, pain-filled death.

Even roaming the unpaved area of northern Currituck, three horses have been hit by cars over the past year. “Horses are unpredictable just like deer,” McCalpin said. “Only much bigger.”

There are signs everywhere in the areas in which the wild horses live—“don’t feed the horses, stay a minimum of 50’ away, please close the gate;” speed limits are reduced and signs warn the unaware that horses roam the land. All of it is designed to minimize interaction between human horse, because in any interaction between the two species, the horse invariably loses.

The wild horses of Corolla are a magnificent and wondrous part of Outer Banks life. Beyond that, however, they are a rare breed—the last direct genetic link to the mustangs of the Spanish Conquistadors. The herd does run free, but it is not free from the encroachment of their human neighbors, and it is up to those neighbors to remember the responsibility they have to protect the horses and keep this living part of our heritage alive.