What a Way to Celebrate Christmas 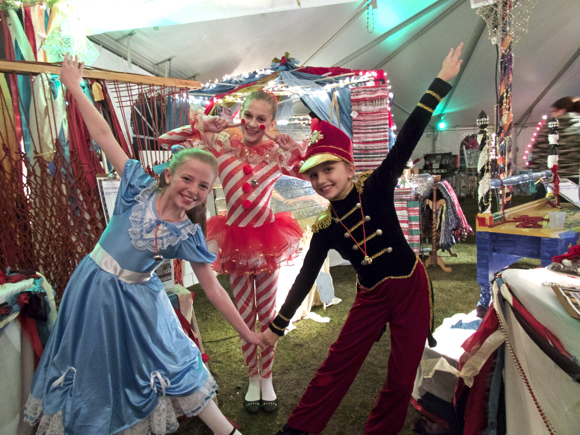 Ballet artists from the Outer Banks Centre of Dance take a moment to pose.

For 27 years the Outer Banks Hotline Festival of Trees has been a part of the local celebration of the holidays. Held for the past few years at the Outer Banks Brewing Station in Kill Devil Hills, it has managed to keep a remarkable level of freshness and energy, Lynn Bryant Executive Director of Hotline says.

“You’d think after 27 years it would be getting stale, but it’s really, really good this year. We have something for everyone on the trees. Something for the fishing crowd, the hobby crowd, the party crowd . . . everyone.”

This will be the last year, though, that Lynn will be hosting as the Executive Director. “At the beginning of the auction (Saturday evening), I’m going to be stepping down. Michael Lewis, who has been the associate director for years, is going to become the new executive director,” she said. “I couldn’t feel better about being able to pass the torch to someone who has so much passion for the cause.”

Hotline, with is mission of intervention, support and prevention of abuse, has enjoyed tremendous community support since it’s founding in 1989, and over that time the Festival of Trees has been the most visible way for that support to be seen.

“The number of businesses, craft people, professional contractors that come out every year to support us is really heartwarming,” Bryant said.

The Festival seems to have something for everyone. Friday evening there is a Champagne Showdown and Zydeco Christmas party, featuring the final bids for the silent auction items. The big night is Saturday—the Gala Holiday Social where the trees are auctioned off. 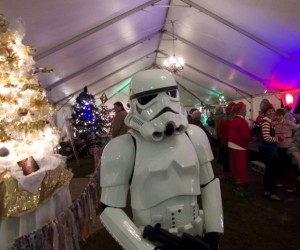 Storm trooper watches over holiday activity at Festival of Trees.

The night that brings out the crowds and lots of kids is the Thursday opening that marks the beginning of the festival. Hot chocolate, cookies, Outer Banks Hotline Bazaar items, and most importantly, Santa is on hand to check on Christmas wishes. This year the dancers of the Outer Banks Centre for Dance gave a snippet performance of the Nutcracker Suite that they will be performing next Saturday at First Flight High School.

Surprise visitors arrived from the Star Wars set as well.

“The (Outer Banks) Hospital administration, the upper administration and staff, a lot of them are really into Star Wars,” Bryant said. “They decided to come as Star Wars characters last night (Thursday). We didn’t know they were coming.”

Popular with the kids—and adults—the Star Wars characters seemed to get almost as much attention as Santa Claus.

With the tents behind the Brewing Station filled with trees covered in donations, children giggling as they dashed between Santa and the hot chocolate and a seemingly endless stream of neighbors and friends in attendance there truly did seem to be a sense of the spirit of the holidays. “It’s a community event,” Bryant said. “What a way to celebrate Christmas.”