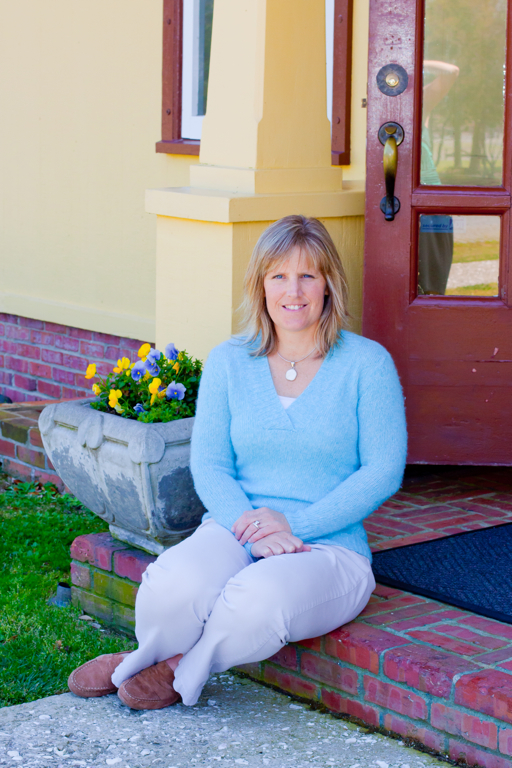 Jenn Sweigart wants you to know the history of Whalehead in Historic Corolla.

And not just the well-publicized history. If you’ve taken a tour of Whalehead or spent much time in Corolla, you likely already know it was an opulent winter home built by the wealthy Knight family in the 1920s.

But in the years between 1939 (when it was sold by the Knight’s granddaughters after their deaths) and the present, the Whalehead story took many twists and turns. It was reinvented as a Coast Guard station during WWII, a boarding school for boys, and a rocket fuel research facility for Atlantic Research Corporation. It was abandoned in 1969, and after years of failed real estate deals, Currituck County purchased the property in November 1992. After aggressive restoration, Whalehead was restored to its original beauty by 2002.

It’s the history between then and now—a seventy-something year span of time—that Sweigart wants to bring to light.

Sweigart, originally from Northern Virginia, moved here in July of 2011 with her husband, Jim, and dogs, Baron and Morgan. Two weeks after the move, she was hired as Whalehead’s Events Coordinator and then promoted to COO in the spring of 2013.

Since she was hired, Sweigart and CEO Ray Meiggs have developed new programs, events and educational activities, while boosting and promoting already established events—all of which bring more tourism to Corolla.

“The County and Trust have worked on renovating and curating, but Ray and I started seeing that there was more history here to celebrate. And that required more activities and celebrations,” explains Sweigart.

Her favorite bit of history is the rocket fuel research. “That was top secret,” says Sweigart. “This house was a part of the space race history—it doesn’t even compute that this place has NASA history attached to it.”

She and Meiggs have created an impressive line-up of events throughout the year to commemorate the history—all of the history—of Whalehead.

“This was the first year we held Mr. Knight’s Wild Night,” says Sweigart. As part of the Outer Banks Taste of the Beach, Whalehead hosted a wild game and wine pairing dinner catered by Chef Wes Stepp of Red Sky Cafe to celebrate the hunting heritage of the Club. Says Sweigart, “The Knights loved to have big parties.”

Also new this September will be the Wine & Swine OBX, with local bar-b-que, music and artists. Says Sweigart, “It’s a celebration of the Currituck and Outer Banks lifestyle.”

Whalehead’s also boosting the holiday season with Christmas in Corolla. Held the weekend before and after Thanksgiving as well as Christmas week, Sweigart explains that the event will be “another reason for guests to come and spend a weekend, see the house in holiday finery and go to Corolla businesses.”

Sweigart’s extending the weekly summer wine festival from June through October. With 300 guests expected weekly, the wine festival is an on-going summertime draw. The Summer Concert Series also brings in a large number of guests; each Tuesday in July and August they have about 200 attendees for the free outdoor concerts on the South Lawn. The annual Under the Oaks Art Festival is another huge draw for Whalehead, bringing around 2,000 guests over two days the week after Father’s Day.

For those who’d like to see Whalehead through the eyes of the Knight’s, the staff is debuting a new tour, “Tippling at Twilight”. Says Sweigart, “Guests can view the house as the Knights would, as they’d get ready for parties. Afterwards there’s a wine tasting.”

On the Sunday of Memorial Day Whalehead is holding its annual Outer Banks Music Festival. The Tams and Band of Oz will headline the event, with performances by Steven Owen, Summertime and local favorite The Crowd. Says Sweigart, “We’re expecting about 1,000 people to come.”

With so much in the works, Sweigart is excited for the future of Whalehead. “I came here for the potential,” she says. “They already did fabulous work; we just need to spread our wings. Whalehead has this huge history that we’re just starting to tap into and celebrate.”