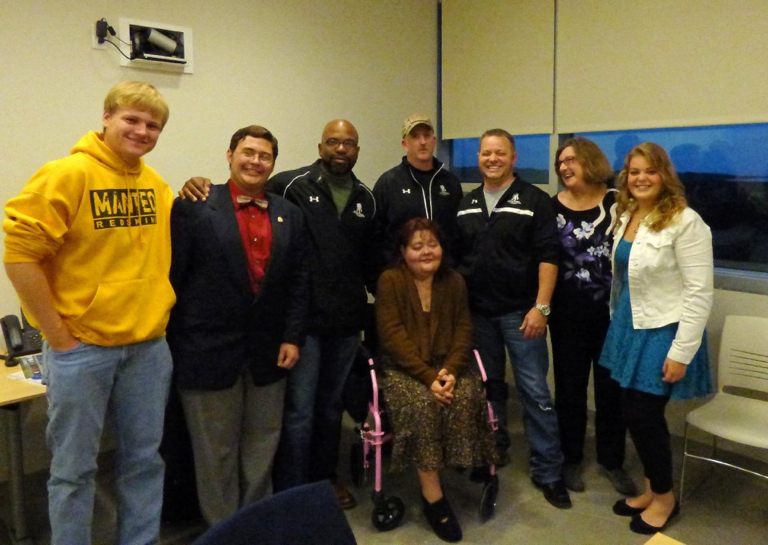 Angela Hecke did not expect the inspiration she found last Sunday.

She had come with her grandson, Arturo Lara to sit in on a meeting between Amber Copeland and Shep Medlin two other members of the Manteo High School Interact Club and the Veterans the club had sponsored for the Veterans Writing Project, sponsored by the Dare County Arts Council.

In a wheelchair, with her left leg amputated below her left knee, Angela sat quietly as the vets talked about what it meant to come to a place like the Outer Banks and how important it was to them to find a community as welcoming and warm as they had experienced.

The Interact Club under the direction of School Counselor Sandy Martin had begun the project four years ago, reaching out to veterans in the Wounded Warrior Project to bring them to the Outer Banks.

They had been communicating with Josh Jones, retired Navy Corpsman, and plans called for him to make the trip last year, but something happened along the way.

“It was last year I was supposed to come and the kids don’t know this but I guess they’ll learn it now,” Josh says. “Last year around October, the nightmares, I figured I had had enough. I took my medicine. My medicine they had me on turned me into a zombie. I would just go blank. The last thing I remember is telling my wife I loved her and I was going to get help.

“The next thing I remember I woke up in the hospital and  . .  . I was 1013, I tried to commit suicide by cop,” he tells the story. “Luckily my wife and everybody stuck with it. And we came the next year.”

Though the story Josh tells is of the struggles and inner demons returning vets often face, the room is often filled with laughter, the type of laughter of family members at ease with one another.

At one point Jarrad Turner, an Army Corpsman, tells us Josh went to get a coke at a meeting and came back with him. Turner and Jones tell Bill Hayes, who is retired from the Air Force, that the Air Force doesn’t go anywhere until there are beds and refrigerators. “And air conditioning,” Hayes adds.

Turner puts it in perspective though, saying, “Those are the guys who flew us out of combat when we got injured.” And then he talks about hospitals in the sky and how they saved lives flying wounded to medical bases.

The admiration they expressed for the job the students did was clear. Josh tells the story of showing up with his wife and daughter in their condo and discovering how generous the Outer Banks community can really be.

“When we got here. We knew a condo had been donated and that was enough. That was more than enough,” he says. “But we got there and there were groceries in the refrigerator. Then I opened one envelope and my wife opened the other envelope. The one I opened had gift certificates to Ocean Boulevard and Surfin’ Spoon. My wife opened the other one and there was a $500 Visa gift card.”

It was a special night out for the couple. At Ocean Boulevard, they were given a private room, everything was paid for nor would the staff take a tip.

And, “Amber (Copeland) and a couple of other members babysat our little girl,” he says.

The effort to raise the funds for the vets was tremendous. “It was a lot of fundraising,” Amber says. “We did the carwash, cookies. This community really does work together. We’re really a good community at giving back.”

The three vets the kids met are engaged with life, refusing to give into the horrors they witnessed, taking an active role to overcome the challenges they and other vets are facing.

They’re planning a cross country bike trip next fall leaving from San Diego and pedaling to Atlanta then up the coast with a stop on the Outer Banks.

“It’s one of the programs that falls under health and wellness,” Hayes explains pointing to programs the VA has developed for returning vets. They talk about how important it is to remain active, that obesity is a problem with returning servicemen and physical activity seems to cut down on suicides.

There is another reason for the ride. “We know how hard these kids worked,”  Jones says. “They deserve something for that. We’re going to try to get them a grant for college. It’s going to be at least $2000 for college for them. We want to give back to this community that gives back so much.”

We were wrapping up and the question was asked of the kids what they had gotten from this, and and then Arturo’s grandmother asks if she can speak.

There are tears running down her cheeks, and in a soft voice she thanks them for the example they have set. “It was just about a year ago that I lost my leg and I never thought I would come here and be so inspired,” she says.