Theatre of Life Lessons on the Outer Banks 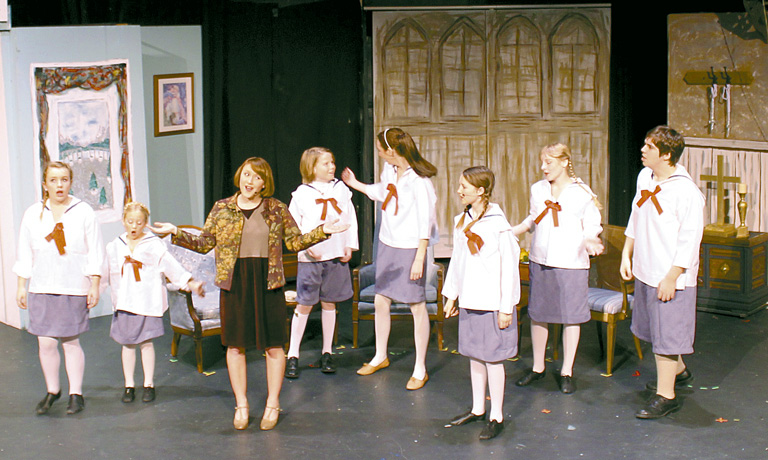 Connie Rose is the Manteo High School (MHS) Teacher of the Year and if there is a way to describe her, it is as a teacher. She is the head of the drama department, works with the students in the Exceptional Children’s Department and owns and operates Dockside Theatre, a theatre company that teaches kids the dramatic arts.

That describes what she does professionally, but it does not touch the impact she has had on hundreds of kids who have passed through her programs, either at MHS or through Dockside.

To Connie, acting and drama create lessons that will impact children throughout their lives. “I am so impressed with the skills kids get from theatre,” she says. “It’s all the things you (as a parent) want for your kids.”

“I’ve always loved the theatre,” Connie says. “I would go to the drug store with my dad, and I would sing and dance on the counter.” (Editor’s note: At one time, almost all drugstores had a lunch counter where they made sodas to order.)

It was her daughter, O’Anna’s, experience that brought home to her how important theatre could be in a child’s life. “It saved my daughter,” Connie says. “She’s hearing impaired and she felt isolated. Theatre gave her a home, a place where she could be herself.”

O’Anna recently graduated with a BFA in Musical Theatre from The New School in New York and she is taking the first step to a career in the dramatic arts. “She’s in Italy doing an internship in Florence right now,” Connie says. “Doors have just opened up for her.”

Connie’s undergraduate degree is in Political Science, but it was a summer work experience that created her path to education. “I had worked as a lifeguard at a summer camp. We had some exceptional children at the camp and the supervisor came to me and said, ‘How about helping out with them?’ I really enjoyed it.”

She went back to school, earning a masters of education in special ed from ECU.

In discussing both theatre and her work with exceptional children, she touches on common themes. “They’re all kids,” she says. Talking about her exceptional children she adds, “Sometimes they have more problems; they just don’t handle them as well. These are kids and they deserve the right to grow up.”

She returns to that theme in talking about theatre. “Theatre provides a haven where some of the kids can work out their problems,” she says. “It helps them find that alternate path.”

Although well known at MHS for her high school productions—plays that include West Side Story and the Sound of Music, to many parents, Connie is best known for her work with Dockside Theatre, the theatre company she founded with First Flight High School Theatre Arts teacher, Beth Kraft in 2004. Ms. Kraft passed away in 2005, and Connie was unsure whether she wanted to continue with Dockside.

At the urging of parents, she kept the theatre group going. Housed in His Dream Center in Nags Head, the company has become a meeting point for kids from Manteo and the northern beaches. “It has created a community between the beaches,” she says. “It has been a creative dream team. We have worked hard to make this a team effort.”

It is the effect on the kids that ultimately drives her, and Connie’s impact on the actors that have been in Dockside continues well past their time in the theatre company.

Rachel Zuhars, a sophomore at FFHS, is in the performing arts program at the school and acted in a number of Dockside productions. “Miss Connie tested me in my acting,” she says. “She took me out of my comfort zone. It brought me out of my shell a lot. It has definitely made me feel more comfortable in making class presentations.”

That type of belief in self is much of the reward that Connie seeks in what she does. “It feels really special to help kids reach their potential,” she says. “It’s pretty amazing.”

July 1 – 14; 10 and up (Intermediate and Experienced stagecraft); Performance TBA