The Thrill of History 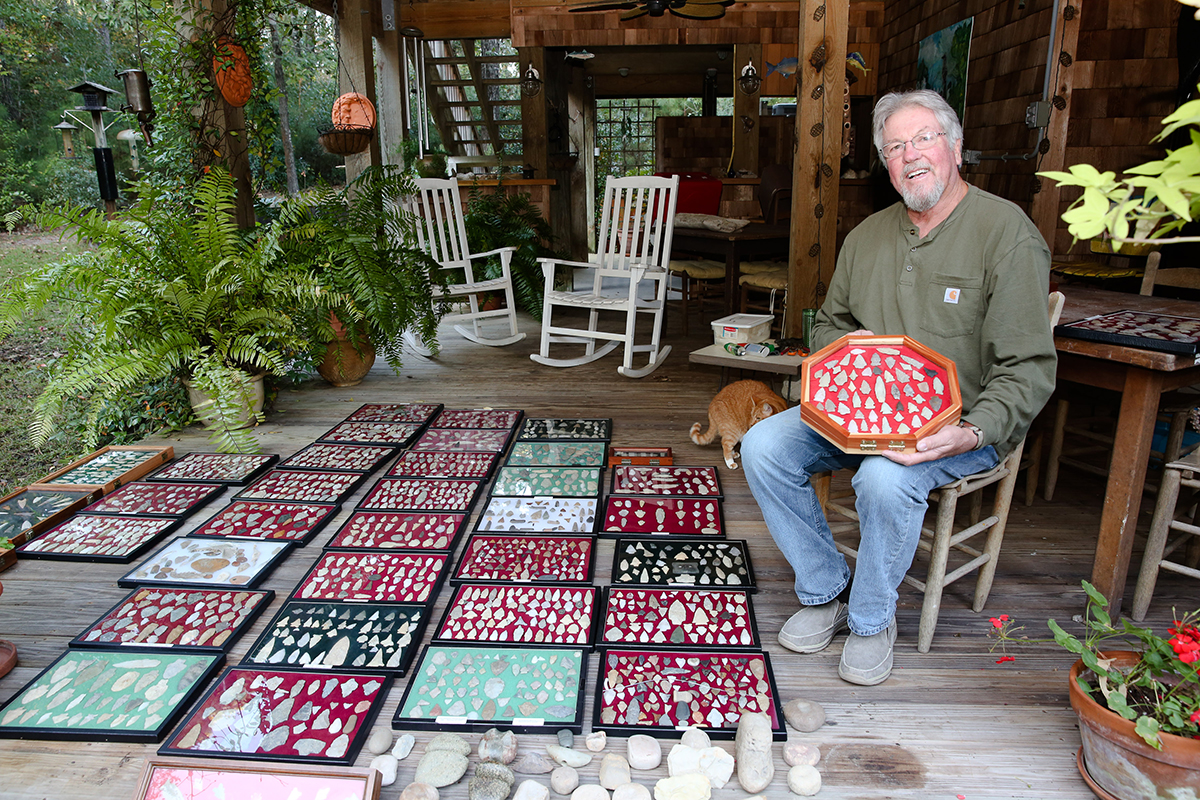 Michael Williams with his arrowhead collection. All photos by K. Wilkins Photography.

We walk upon history—literally. Hidden beneath the soil is a remarkable tale that extends back in time 5000, 10,000 and perhaps even 15,000 years ago.

Before the first European explorer set foot on the shores of North Carolina; before the British and the Spanish fought skirmishes, battles and wars over who would control North America; before the Outer Banks rose from the sea, there were Native Americans living where our homes and towns are today.

To Michael Williams, that history is real and as he combs fields, streams and beaches for that evidence, a story unfolds of the culture and lives of the very first immigrants to come to North Carolina.

“I like to artifact hunt more than anything else,” explains Michael of his passion for searching for Native American arrowheads, tools and jewelry.

According to Michael, the first artifacts he found were arrowheads and it was all his sister, Karen Frey’s, fault.

While visiting his parents in Lee County, Michael and his brother-in-law, Ted, were looking for something to do. Karen told them to go out to the field by the house and see what they could find. 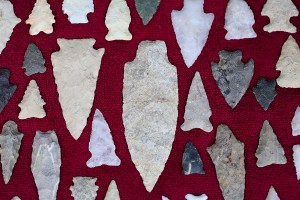 A closeup of some arrowheads in Michael’s collection.

Half a dozen arrowheads later, Michael was hooked.

He has searched for Native American artifacts all over eastern North Carolina, and as his collection has grown a remarkable narrative emerges telling the history of the earliest people to inhabit the coastal plain.

The collection is housed in glass display cases within a safe. As Michael pulls out each case, he tells the story of where he found each artifact and its history.

There is a small arrowhead with slightly rounded sides and two small tails coming out of the base. “That’s a Hardaway-Palmer. It’s 9,000 to 10,000 years old.”

At one point he comments that many of the artifacts he has predate the Outer Banks, and that’s an accurate statement. The Outer Banks rose from the sea between 4,000 and 5,000 years ago and some of his collection is far older than that. The Clovis point is considered the first of all projectile points on the North American continent, and the oldest examples date back 15,000 years.

He points to an arrowhead with a slightly flared base and notches at the end. “That’s a Dovetail,” he says. “They’re not supposed to be as far east as this.” The arrowhead is 8,000 to 9,000 years old.

The extraordinary variety of arrowheads is fascinating, but equally as compelling is the image that begins to emerge of the culture, history and everyday life of the people who lived here.

The more recent arrowheads do not appear to be as complex as some of the older ones. To Michael, that makes sense because the first people to come to North Carolina were nomadic hunters. “They were following the game,” he says, pointing out that they had to put their energies into creating the best tools for the job.

As the Native Americans moved from being nomadic to semi-nomadic and finally settled into villages, the use of recognizable tools emerged. Michael points to miniature teeth. “Those are fossilized sharks’ teeth,” he says. “They would use those as drill bits.”

There are conch shells in his collection, which were also used as drills.

Michael has found jewelry from these tribes as well. He indicates two oblong stones, clearly worked into shape, with holes drilled into them. “Those are gorgets. They would have been worn for decoration,” he says. 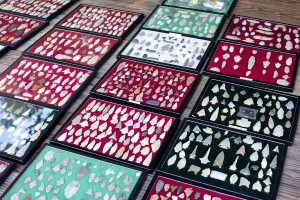 There’s a small stone that almost looks like a miniature axe that he found in mainland Dare County. “No one knows what this is,” he says. “I think it’s a kid’s toy.”

He has come to understand how and where the people lived by searching where hills and streams meet. “They were living next to springs with clear water on high ground. They would want a swamp right next to it for the quantity of game that lives there.”

When he can find that type of environment, he knows there is a good chance that he’ll find something.

Although much of Michael’s collection includes arrowheads, there are other extraordinary finds as well—and some of the most remarkable discoveries were made locally.

“Currituck County is where I’ve found my best stuff,” he says.

Almost reverently he brings out a case with two beautiful carved or shaped stone pieces. “These are bird stones,” he says. “Normally they’re three to four inches. These are seven to seven-and-a-half. No one has ever seen anything like them this far east.”

There’s also the axe he found in Dare County, a groove cut in the haft and the blade still sharp.

Michael is still looking for more, the joy of discovery pushing him to see what may lie beneath his feet. He’s become an archeologist and a historian along the way, yet there is still something that remains of his first day and that first discovery. “The best part about it is picking it up,” he says.