The Sum of Our Lives 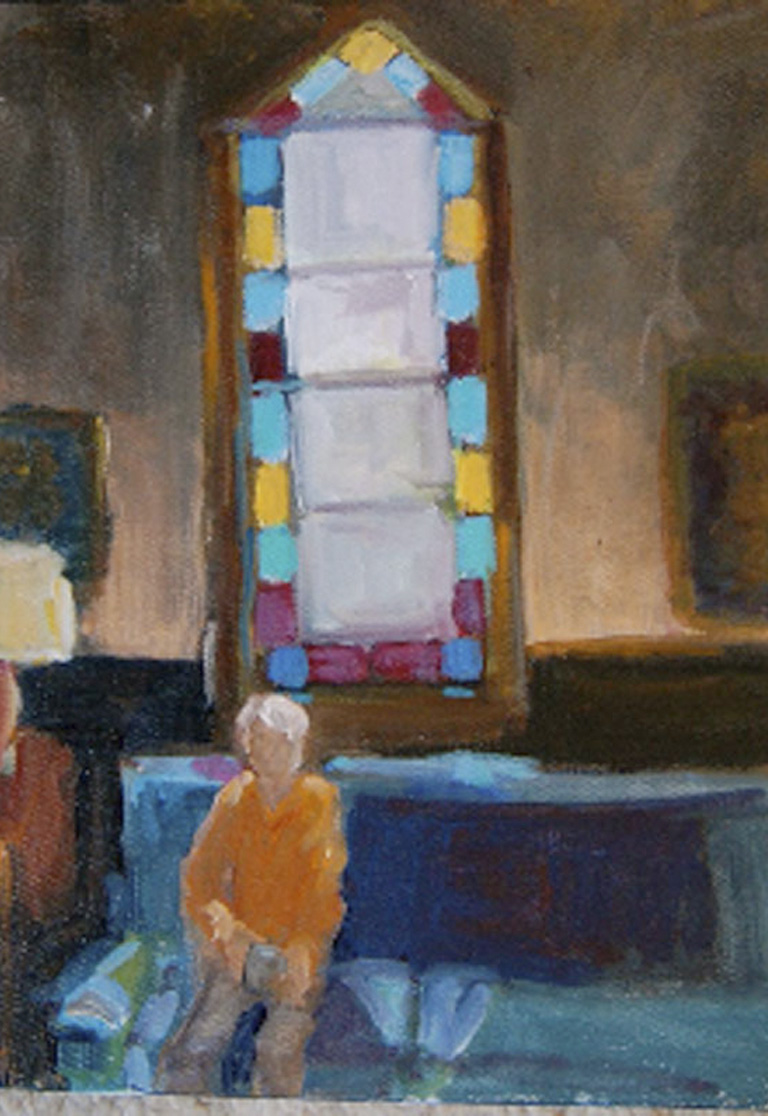 Painting from first phase of the Legacy Project. "I've always believed, as far as faith goes, everything always works out for the best." (Emma Jane) Painting by Tracy Bell

The sum of our lives is an extraordinary tale. Not by conscious design, certainly, yet the manner in which it grows does not change its importance. It is a personal history that is filled with the stuff of life—humor, pathos, unintended lessons and a legacy of achievement.

There is in Dare County a Legacy Project, bringing together local artists and hospice families. Created two years ago through a Dare County Arts Council grant, the project is administered through Dare County Home Health and Hospice (DHHH). Originally seen as a project that would pair visual artists with hospice families, the program has been expanded to include writers and musicians.

Hospice care is palliative—meaning the comfort of the patient is the primary concern. It is end of life care, and it is provided at a difficult, stressful and usually sorrowful time.

It is not only the patient, though, who is in need of comfort during an individual’s final passage through life. The family is also in turmoil. One of the most remarkable features of the Legacy Project is how it helps families through the dying process.

Tracy Bell, who is now the Volunteer Coordinator for Dare Home and Hospice, first participated in the Legacy Project two years ago. She found creating a work of art with the hospice patient allowed the family to see their mother in a new light. “It gave meaning to the family,” she recalls. “They were able to revisit those things that their mother had done.”

Although hospice care is geared toward the patient, the family is often being treated as well. The concept of palliative care includes more than the person going through the final stage of life, for there are drugs to treat almost any physical pain, but soothing a broken heart is far more difficult.

The ability to communicate with a loved one is an important part of the hospice program. During the final stages of life, both the patient and family caregivers can become isolated. “It is very desocializing,” says Bell.

The introduction of a new set of eyes and ears into that isolated, desocialized setting creates a wider world for the patient. “For patients facing end of life care, the world is getting smaller and smaller,” Ellie Ward, Nursing Director of DHHH, says. “There is the room, family, care givers, hospice workers.”

“The primary symptom (of hospice patients) is fatigue and boredom,” she adds.

A new person with different expectations and a different point of view, may create excitement and stimulation that was not there before. “It’s giving patients something to look forward to,” Ward says.

As the creative process goes forward, it can help to overcome that sense of isolation that many families feel. “It’s something they have enormous impact in developing,” Ward says. “It’s something that can be very tangible and lasting.”

There are other benefits as well. A hospice patient who is mentally or emotionally engaged in creating visual art, or music, or a written memory may give family members a chance to relax and step back from the daily grind. “It can give a respite for the caregivers,” Ward says.

The initial grant for the project was written by then Executive Director of the DCAC, Laura Martier. The grant was an arts and health grant through NC ARTS. “The arts and health is a growing field,” Martier says.

“Ellie and I had been talking about collaborating,” Martier continues. “She really pushed it.”

“It (the first phase) was very successful,” Ward says. “One of the key provisions of the grant was the final artwork had to be on display. Some hospice patients come to the show, in spite of it being an arduous trip. It meant the world to them.”

With the success of the first phase behind them, Ward and Bell began reviewing what else could be done with the project. “We started brainstorming—what can we do? How can we develop this?” Ward says.

“The project is ever-evolving to meet the needs of the patients,” Bell adds.

Editor’s note: The Legacy Project as it has evolved to include writers and musicians as well as visual artists, seems to be unique. Although there are a number of programs that match artists with hospice patients and other projects that bring together writers or musicians with patients, this seems to be a one of a kind effort bringing everything together under one roof.