The State of NC Education 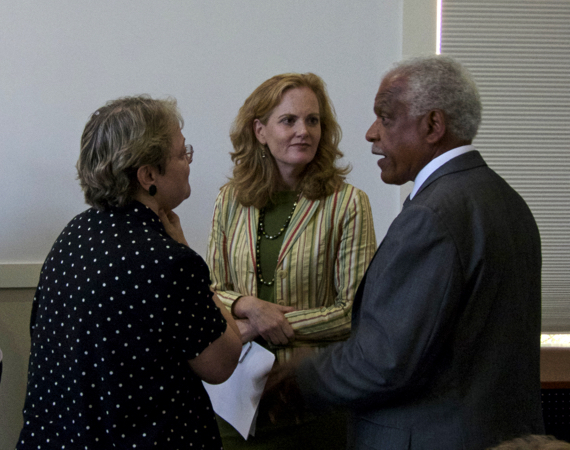 As the North Carolina state budget remains mired in an impasse, the state’s schools are among the most dramatically affected. Although the quandary over what programs to fund and how to compensate teachers and teacher assistants is at the heart of the current debate, the roots of the problem extend back a number of years.

In a non-partisan forum sponsored by the Dare County Democratic Party held at the Outer Banks Visitors Bureau office in Manteo, the trends in state spending on education and how education is viewed at the legislative level was discussed by Leanne Winner, Director of Governmental Relations for the North Carolina Schools Board Association and Dr. Randolph Latimore, Superintendent of Hyde County Schools.

North Carolina schools are falling behind other states in how well education is funded and how well teachers are compensated—and the effects are being felt in Dare County as well as school districts across the state.

There are just a handful of states that fund schools directly from state coffers, North Carolina, Virginia, Maryland, Alaska and Hawaii. That model of funding is why the debate at the state level is so intense—in 2014-15 education accounted for 37.8% of the state budget. That is a huge part of state funds, yet it is significantly less than the 52.5% allocated to schools 45 years ago in 1970.

The impacts, Winning said, have been dramatic. According to information she handed to the audience, since the 2008-9 school year, all funds for staff development have been cut, programs to improve student accountability are no longer funded nor is school technology. In the classroom itself, funding for textbooks has been sliced by 78%, Teacher Assistants by 23% and there are almost 2500 fewer teacher today than there were six years ago.

It is not just the loss of teachers—teacher pay has stagnated and compared to other states has steadily declined; in 2001 the state was ranked 21st nationally in teacher compensation. Today it is 47th in the country. Even within the Southeast region, the state suffers by comparison. Only Mississippi ranks lower.

Experienced teachers are being recruited by other states; teachers are leaving the profession; and fewer students are enrolling in college teaching programs.

We have got to find a way as as as state to make teaching attractive as a profession,” Winning said.

It was Dr. Latimore who described the impact to school systems the decisions the state has made as funding has been cut.

“The bulk of what is happening is negatively impacting students,” he said.

He cited what is happening in the county’s mainland schools as an example. “In our kindergarten classroom, we have two classrooms with 40 students 20 each and one teacher (in each class). That’s a big task to ask a kindergarten teacher to provide quality services for 20 students by himself or herself,” he said.

In the past, Teacher Assistants (TA) have been part of the classroom mix, but the state budget impasse has school districts unsure if they can or should hire assistants for the year.

The Senate wants to strip money from TA positions—between 8,500-9,300—to fund additional teaching positions. The House version of the budget leaves the TA funds intact.

Because school districts do not know if they will have money to pay TAs they are not hiring them—and children, especially in kindergarten and first grade need the extra attention to learn classroom structure, social skills and basic reading and math requirements.

The battles that are occurring at the state level are a direct result of the state Senators and House members who have been voted into office—a point Dr. Latimore honed in on in challenging the audience.

“It doesn’t matter to me what party you’re from,” he said. “You’ve got to have the interest of public schools first place. We sit and we talk and we sit and we talk, and then we put the same people back into office. What is the message?”