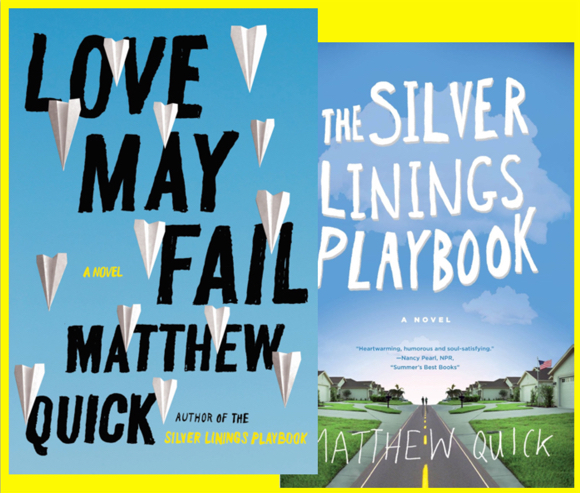 “I create novels. That’s what I do. I’m a story teller.” With those three simple sentences, Matthew Quick, author of the best selling novel The Silver Linings Playbook and a just released novel, Love May Fail, described his life as a writer.

“An Evening with Matthew Quick,” organized by Jamie Anderson of Downtown Books and held last night at the Dare County Arts Council gallery in downtown Manteo, was a fascinating journey of discovery. A trip that took the audience with Q, as his one-time students knew him, on a voyage that included a teaching career, perseverance to follow a dream that was balanced against the abject terror that it was a wrong decision and finally through the creative process.

Told in the rapid fire dialect of his native South Jersey—Quick grew up outside of Philadelphia—he was funny, honest and even verbally, a master story teller.

As recounted by him, his first seven years after college were spent in the classroom.

“When you get hired to teach high school English for the first time, it’s pretty overwhelming.” Quick said. “Basically what happens, you’re 23 or 22 years old and they put you in front of kids everyday and they tell you to go. The problem at 23 is that you don’t necessarily have your own rock solid life philosophy.”

To compensate, as he explained, he stole his teaching philosophy from the character Robin Williams created in Dead Poet’s Society. And he points out that there was a flaw in the character that he had overlooked. “I completely ignored the ending,” Quick said. “Robin William’s character doesn’t make it through the year. He gets fired.”

His priorities were based on that philosophy—a philosophy that believed great writing created an underlying value and meaning to life. He acknowledged that certain things are necessities and clearly priorities—verbal skills, prepping for tests, writing skills—but to him, other aspects of the classroom experience are just as necessary and perhaps even more important.

At the end of his teaching career, there was a growing realization that his idealism and the reality of the system were in conflict.

He then spent the next three and a half years living at his in-law’s house, writing every day; believing that what he was creating had meaning and substance and was a dream worth pursuing. By his own account, he contacted 70 agents until someone felt his voice could be successful.

When he reached a point that he began to doubt himself, the image, the concept and the story for The Silver Linings Playbook came together and a successful career began.

“I realize that I am lucky to be standing in front of you. I work very hard every single day of my career. But there’s a lot of luck involved too,” he said.

That work can be lonely and consuming. He noted a number of times that everyone works in their own way, yet his description of the process of how a story evolves for the author is similar to the observations of other writers.

“I think naiveté can be a great gift when you’re starting out. Sometimes when you don’t know things it allows you to keep moving,” he said. “The metaphor I like to use if you walk up to a gigantic mountain and. . . . it looks really dangerous. You might look at it and say to yourself it’s too dangerous. If you walk up to the mountain and the top two thirds are covered in clouds you might say to yourself I don’t know what’s at the top but I can do the bottom third. That momentum can really propel you.”

Quick seems to be at the top of his profession. Love May Fail is his third novel for adults. He has also written three young adult novels: Boy 21, Sorta Like a Rock, and Forgive Me, Leonard Peacock. The Silver Linings Playbook was turned into an Oscar winning movie and he is currently writing a screenplay in addition to his work on novels.

A Quick Incomplete Review of Love May Fail 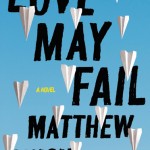 I just picked up the book last night, so I have not had a chance to finish it. The quick, down and dirty review though is this is a really good piece of writing.
The characters, even in extreme situations, are believable and beautifully drawn; it is riotously funny, sometimes sad and at times humor and pathos exist simultaneously. The dialogue, both internal and external, are perfectly executed, moving the story along at a breathtaking pace.