Article and Photos by Kip Tabb 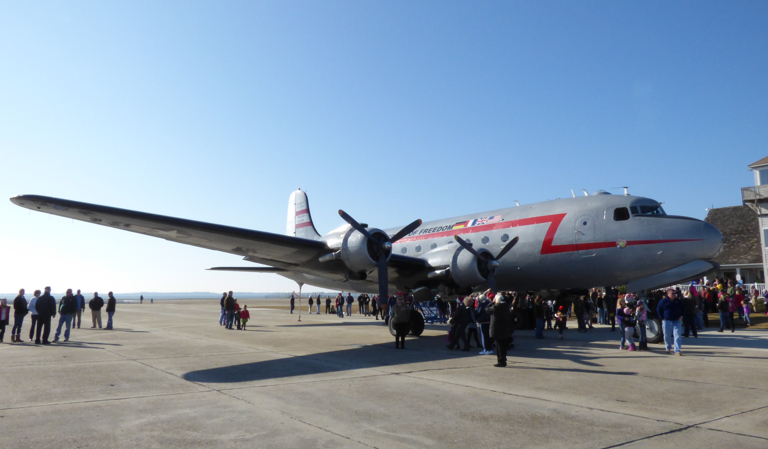 The Spirit of Freedom parked on the tarmac at the Dare County Airport.

The Candy Bomber came back again to the Outer Banks, and the story behind its name tells an extraordinary tale of generosity of spirit and a simple act of kindness.

The year was 1948 and Soviet control of East Germany was complete. Germany as a nation had been divided after WWII, and where the allied powers that controlled the western part of Germany—the United States, England and France—were trying to reunite the country, the Soviet Union would have none of that.

In June of that year, in an attempt to wrest control of Berlin from the western allies, the Soviets cut off all land transportation to the city from West Germany. Their belief was that when things got too desperate, the citizens would turn to the Soviets as their saviors and control of the Berlin would be theirs.

What followed was the Berlin Airlift. To this day the largest and most sustained airlift ever mounted—and through the efforts of thousands of pilots and grroundkept a city of 2,000,000 alive for over a year. 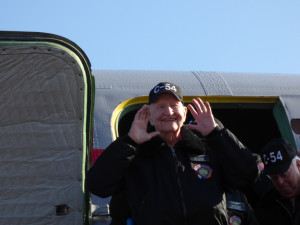 Along the way—beyond the extraordinary story of the airlift—another story emerged, one of compassion and the spirit of giving.

Lt. Colonel Gail Halvorsen (USAF, Ret.) was a 1st Lieutenant in 1948, flying three round trips a day to Berlin. He had never really seen the city, so after he finished for the day he hopped a flight back to the city. “My buddy was headed to Berlin with a load of flour,” he says. “So I hitch hiked back to Berlin.”

He was in a jeep with a friend at the end of the runway when he saw the kids. “At the end of the runway, behind the barbed wire . . . was 30 kids 8-15 years of age,” he said. “ The kids were friendly. Why were they friendly? Because their aunts and uncles right across the border (in East Berlin), would come over and tell these kids, ‘Hey you don’t want anything to do with these Russian. They tell you everything you’re going to do.’”

The kids told him don’t give up on us. “If we lose our freedom we’ll never get it back,” they told him.

“German kids teaching me,” he explains.

Not one of those 30 kids had asked for anything. He knew all kids loved candy but had not had it for years, and he went back and offered them two sticks of gum, which they carefully divided among themselves. “A voice came to me. Some people call it conscience. I call it the Holy Ghost. ‘Go back and give them the two sticks of gum.’”

I knew I had to do something so I told them I would come back tomorrow and drop candy. He told them he would wiggle his wings when he went over and drop them candy.

It was a three man crew flying the C54 and the men gathered their candy rations, put miniature parachutes on them and dropped the first load of candy for the children of Berlin.

Halverson didn’t ask permission; he just did it because he thought it was the right thing to do—which almost got him in a lot of trouble with his commanding officer when he got called into his Colonel’s office and confronted with a newspaper photograph clearly showing the aircraft numbers of his plane. 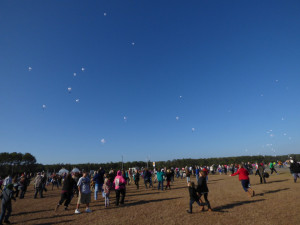 Scramble for candy at the Dare Count Airport.

As it turned out, though, that small act of kindness by one American pilot had a disproportionate effect on morale, and soon all of the American planes were dropping candy to the children of Berlin.

The Candy Bomber has come back, now a restored C54, it has made the flight every year since to 1999. According to Tom Copp, the pilot of the aircraft the Dare County Airport is the most visited site for the airplane.

He founded his Spirit of Freedom organization to tell the story of the Berlin Airlift, and because of that there were some funds available to restore the aircraft. “I was lucky,” Copp says. “We had already created the organization so we had some funding in make it happen.”

Nonetheless, the Candy Bomber did not make it’s maiden flight until 1994, but since that time it has flown missions all over the world.

Watching the aircraft on its candy bombing mission, it’s remarkable how graceful the airplane appears. It circles the airport and comes in low over the field and then hundreds of miniature parachutes seem to suddenly appear. There is an immediate dash across the field as 100s of kids scramble for a small piece of history.

Colonel Halvorsen is 94-years-old now. He came with the Candy Bomber to the Dare County Airport this year. And energetic man with a wonderfully positive attitude toward life, he is an example of a life well-lived.