The Boy Who Flies Comes to the Outer Banks 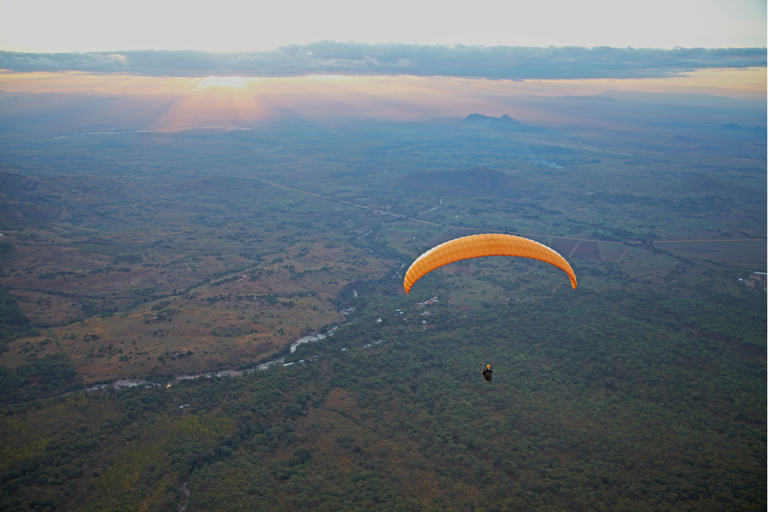 Still from the movie, the Boy Who Flies. Paragliding in Malawi.

The Boy Who Flies will be screened at First Flight High School at 12:00 and 3:00 on Saturday, September 28. It is an award winning documentary and worth seeing.

Inspiration is a strange piece in our lives. A thing of infinite capacity, we never know where we will find it or how it will effect us.

Benjamin Jordan has, by his own admission “. . . been chasing dreams for a while.”

A talented and experienced paraglider pilot, he set a Guiness World Record, flying his powered paraglider across Canada and back in 2009.

It had been a life’s goal and in doing so he raised over $1,000,000 for breast cancer research. Yet when it was done, he found himself floundering. “I was not motivated after that,” he says. “I needed something to hold on to and had nothing.”

Then he had a dream–a vision in which he saw himself teaching children in Africa to make and fly kites and flying his paraglider with someone.

He did some research and the only African nation that had no history of paragliding was Malawi, a very poor landlocked nation toward the southern end of the continent.

So he headed to Malawi and what he found was the teaching experience was more about learning. “It was very humbling,” Jordan says.

Because it is such a poor country, everything is reused in Malawi, so finding the materials for the simple diamond kites was easy. Yet even in the midst of one of the poorest African nations, still dreams may soar.

Godfrey Masauli had always dreamed of flying. His uncle was the first native Malawian pilot in the country, and although poverty and runaway inflation had destroyed his uncle’s livelihood, still Godfrey believed he would one day fly.

“He didn’t even know what a paraglider was,” Benjamin recalls. But Godfrey did know he wanted to fly, and working together, the pair created a bond of trust and learning.

Finally reaching the point that Godfrey would leap from a cliff and truly fly for the first time, in an awe inspiring and emotional ending to the film.

Benjamin and Gregory will be available at the screening on Saturday.

Check out the trailer. Amazing: