Taking the Ferry to Political Insanity 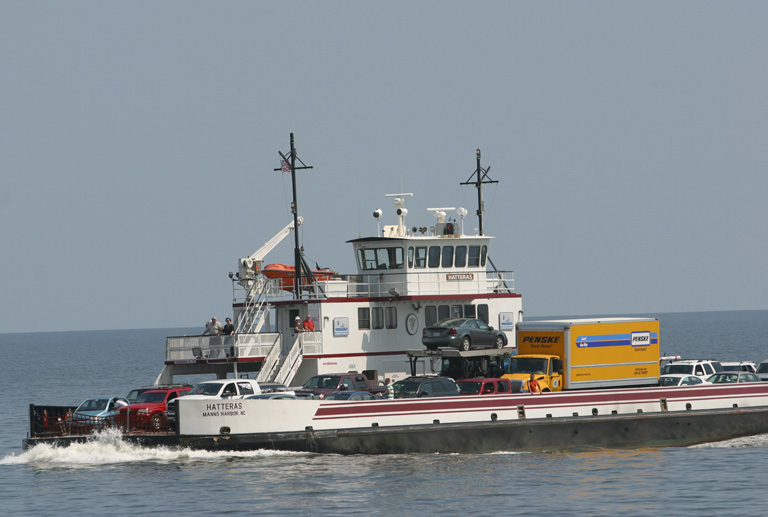 Passing ferry on the Pamlico Sound carrying passengers and supplies in the aftermath of Irene.

Trying to understand the political machinations that go into government budgets is a lot like asking a first grader to explain quantum physics. The process is confusing, complex and often proceeds at the whims of the egos of party leadership. It is by its very nature a gathering of horse traders, showmen and cynical manipulation.

Yet there is a limit to how much cynical manipulation can be endured in silence.

Buried in the State Senate’s 2012 budget is the following language: “The Board of Transportation shall establish tolls for all ferry routes.”

If the Senate budget passes intact, on July 1 (the beginning of the new fiscal year), every ferry system in the state, including Hatteras/Ocracoke and the Knotts Island Ferry will have a fee attached to it.

It’s hard to know where to begin with what is wrong with this proposal. It is so cynical, so cruel, that it is difficult to imagine that people who claim to represent the best interests of this state would dare to present it.

The logic would seem to be the equivalent of the laws governing toll roads in North Carolina. A toll road is only permitted if there is a viable alternative. Knotts Island residents can at least drive up to Virginia and around, although that is an alternative of dubious value; but there is no way on or off Ocracoke except by water.

Does this mean, then, that residents of Ocracoke who need medical care once or twice a week, will have to add  $10 or $20 to their expenses? When the Ocracoke School teams play off the island, half the population goes with them. Does this mean that parents will now have to pay for the joy and pride of watching their children—an expense the legislators from the interior of the state who proposed this, will certainly not experience?

Even leaving the morality of economically isolating the population of an island aside, this suggestion is at best absurd, and more likely cynical and self-serving.

It is absurd because it cannot be implemented. There is no infrastructure in place to collect tolls at either the Knotts Island or Hatteras/Ocracoke ferry. It will probably cost at least the equivalent of the first year’s tolls to create the infrastructure—and that does not account for the extra personnel that would be needed.

It is cynical because the party leadership who have presented this must know that is the case—and if they do not know that is the case then they are frighteningly incompetent. Clearly this is a self-serving attempt to manipulate the budgeting process to create political gain for one party’s view or philosophy of government.

This is part of a hardball negotiating strategy that will allow the Senate’s vision of governance to gain ascendancy over the House version when the chambers go into caucus.

In and of itself, there is nothing wrong with that. It is the very basis of our political process and at the heart of that process is a calculation that allows for the maximum amount of gain for the minimum amount of compromise.

This, however, is more than political gamesmanship. To wantonly and knowingly endanger people’s livelihoods and lives for political gain, is a step too far.

Editor’s note: The Outer Banks State Senator, Stan White, spoke against this proposal eloquently and forcefully according to a number of reports. The Senate’s budget can be viewed at http://www.ncleg.net/sessions/2011/budget/2012/H950-CSMDxf-28.PDF. The ferry proposal is on page 140.