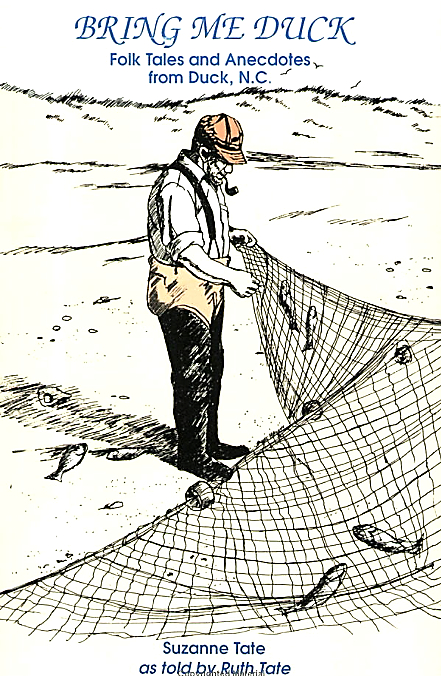 Suzanne Tate’s “Bring Me Duck”, an oral history of the village published in 1986.

To most readers, Suzanne Tate is best known as the author of the Nature Series children’s books. Beautifully illustrated by James Melvin, there are 33 books in the series now, with titles ranging from Crabby & Nabby—the first book—to Wendy Whale, her most recent.

But Suzanne’s first love was history. She graduated from the University of New Mexico with a degree in anthropology, and the first books she published were oral histories of the Outer Banks: Bring Me Duck, Memories of Manteo and Roanoke Island and Logs & Moonshine, Tales of Buffalo City.

It seemed like a natural fit then, when Arcadia Publishing, a publisher that specializes in books about local histories, approached Suzanne to produce a pictorial history of the town of Duck.

There was a problem though. The series is called “Images of America” but the images Arcadia wanted didn’t exist. “The Images of America is all black and white, and I said, ‘They just don’t exist,’” Suzanne explains. “When I went there (to Duck) in 1953 the first time, I think my camera was the only one in the village.”

The publishers came back with a different idea. “We’ll have you do images of modern America,” they suggested.

“I was delighted to hear that,” Suzanne said. “That’s mostly in color. So that’s what I’ll be doing. From the 50s and 60s to the modern era.”

Most of the older images are photos that Suzanne took when she lived in the village in the 1960s—a collection of color slides that depict village life when there were perhaps 30 families living in what is now a modern tourist mecca.

The story of how the Arcadia publishing became aware of Duck has parallels to Suzanne’s story.

Suzanne told the story of Duck once before as an oral history. “Because of my association with the Duck people—in particular the Tate family—I’m already aware of these things,” she says. “I published in 1986 an oral history, Bring Me Duck. I am so glad I preserved that because that information would have been lost.”

The history she is telling now, though is the more modern version of Duck, a story that in many ways aligns with the history of the Outer Banks as a thriving tourist economy.

It started with a little produce stand. “That was the very first commercial business that came into the village,” Suzanne recalls. “I just don’t recall what year that was. They (the Tates) were a little bit surprised.”

“Developing the road to Corolla had a lot to do with it,” she goes on to say. Development of Corolla began in the mid 1970s with a private road allowing access although the most intense development of the area did not begin until NC12 was from where it ended in Duck to what is now the 4WD area of Carova.

There isn’t much left of the village Suzanne once knew. As land values soared and more and more visitors started flooding in, the original families sold their homes and moved away. Only one building still remains from those days, according to Suzanne. “That fishing shop (Bob’s Bait and Tackle). That’s the only one,” she says.