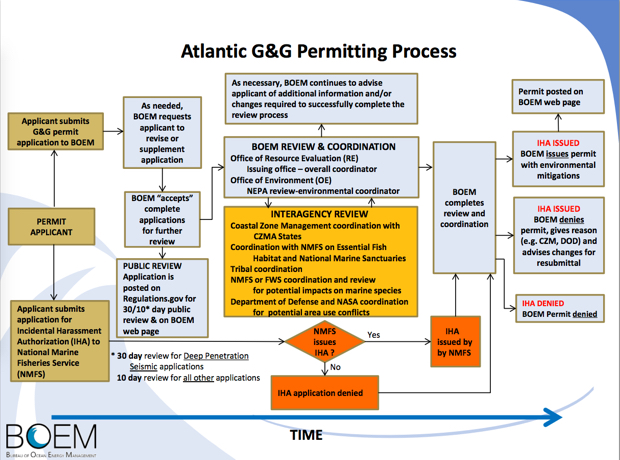 With a Monday visit from the Bureau of Ocean Energy Management (BOEM) at the Kill Devil Hills Ramada Inn, the first phase in the in the permitting process to explore for offshore oil and gas is coming to an end.

The public has two days remaining to comment on proposed seismic testing permits off the North Carolina coast.

The BOEM permit procedure leading to what may be the sale of leases for the purpose of developing offshore gas or oil resources is a complex and multi-layered process. The first step is issuing G&G (Geological & Geophysical) permits to survey the seabed for possible energy reserves.
G&G mapping, better known as seismic surveying, uses very loud pulses of sound that penetrate into the earth’s crust. As the sound rebounds, the data is analyzed and a map of the subsurface of the ocean up to 10,000’ below the surface can be created.

The process is somewhat controversial, with a number of marine biologists raising concerns about the effect the sound that is emitted will have on marine life. To date there have been no peer reviewed studies showing harm to marine life, although there have been coincidental marine life deaths and beachings that suggest there may be a problem.

The seismic survey permits are not permits to drill. “Seismic surveying does not equate to drilling,” John Johnson, G&G permitting for BOEM, emphasized.

Seismic surveying is done by private companies who then sell their data to oil and drilling companies. There are a number of steps that the companies must go through to receive a permit.

Even though the public comment period is about to end, the issuance of a permit does not seem imminent. “I can’t give you a time frame,” Johnson said.

As an example, one of the requirements of a seismic survey permit is an Incidental Harassment Authorization (IHA). The purpose of the IHA is to reduce the chance of harm to marine mammals and turtles. Applicants are required to keep observers on their ships at all times and to cease operations when whales or dolphins come within 500 meters of the craft.

The IHA details the mitigation plan the company seeking a permit will use. Without an IHA, a permit cannot be issued, and according to BOEM officials, very little is done to process the permit application.

Petroleum Geo Services (PGS) has submitted an application for a 3D G&G survey of the area off the North Carolina coast considered most likely to hold oil or gas reserves. Although the permit was filed in May of 2014, the company has not yet filed an IHA and no action has been taken on the application. A 3D survey is considered the intrusive form or seismic surveying.

Because all lease areas and seismic surveying is being done outside the three mile zone under state jurisdiction, North Carolina does not and cannot issue permits for any activity. However, the state—through CAMA—did request a consistency review that examines if the proposed G&G surveys would interfere with the use of the ocean by North Carolina residents and visitors.

CAMA determined that the activity was consistent with current uses of the ocean, but did request that survey ships be aware of commercial and recreational fishing interests.

The entire permitting process leading to the issuance of a permit to drill for oil and gas is multi-layered, confusing and time consuming. Under any circumstances, the sale of leases in the mid Atlantic region will not begin until 2021. The sale of a lease does not give the lease holder permission to drill—only the right to submit a permit to drill, with another set of permits to be filed.