Surfing into the Heart of the Father 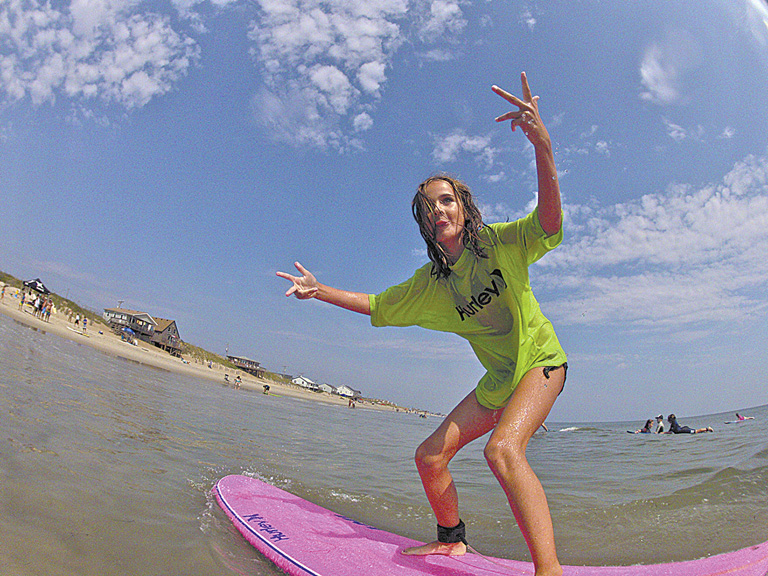 For 30 years, elders at Liberty Christian Fellowship in Colington dreamed of using the church’s land for youth camps.

Last year’s attendees were ages 8 to 17 with surfing skill levels from beginner to advanced. “At the end of the week, you could just see a remarkable difference in the kids,” Snyder recalls.

Snyder and his staff share a Scripture or theme for the week and then take Liberty’s bus to wherever the waves are.

The importance of character is stressed, as is the importance of making good decisions. “We try to just challenge the kids in a positive manner: ‘If you incorporate these things into your life, they’re going to help you in all areas,’” Snyder says.

Spiritually, he noted growth in the kids and even in some parents; and physically, he says watching them catch their first wave and seeing them “get it” is rewarding. 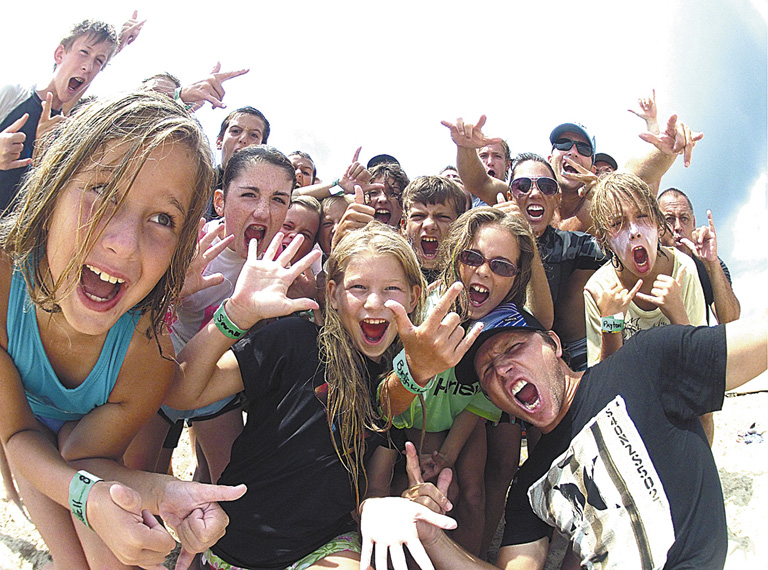 Snyder started surfing when he was almost 13 and wishes he would have started sooner.

“The first time I actually went out and caught a wave—that was where my life changed,” he says—“a direct parallel of when I gave my heart to the Lord [and] got the fullness of it.”

He started surfing professionally at age 21 and gave his heart to God at 23, which he called crucial timing.

“The surf industry is a crazy industry in a lot of ways,” Snyder says. “I was trying to find out who I was [and] what direction to go. And so when I gave my heart to the Lord, it really gave me the direction I needed.”

About 10 years ago, Snyder and his wife Corissa began hosting one surf camp each summer in conjunction with First Flight Church in Nags Head. “That’s originally where I kind of fell in love with the whole concept of turning kids on to the sport of surfing and sharing my faith; and it was just a good platform to do both,” he says.

In 2011, he held his first camp under the umbrella of the Fellowship of Christian Athletes (FCA), which provides “the tools to run an excellent camp.” He expanded to three camps last year because of the first one’s overwhelming success.

Campers visit surf shops, surfboard factories and Surfin’ Spoon, a Nags Head yogurt shop owned by fellow surfer, Jesse Hines and his wife, Whitney, during the week to experience “the whole picture of surfing,” says Snyder. They have games and activities for any downtime. And they use soft-top boards with plastic fins in the water “because a hardtop surfboard has no forgiveness,” Snyder says.

His son is eight and participated last year. “He’s already got the bug,” Snyder laughs. “I’m excited for him because it is such a fun sport once you do it.”

The cost should be roughly the same as last year: $300 per person. Scholarships are available, and people can contribute to the scholarship fund by visiting www.fcasurf.org and clicking the donate button.

Snyder hopes to have at least one overnight camp this year, which would give him more time with the campers.

“Noah is amazing with the kids,” says John Hobbs, Liberty’s pastor of five years. “He’s a surfing icon, but he really loves the Lord, and he really has a way to communicate that with kids.” 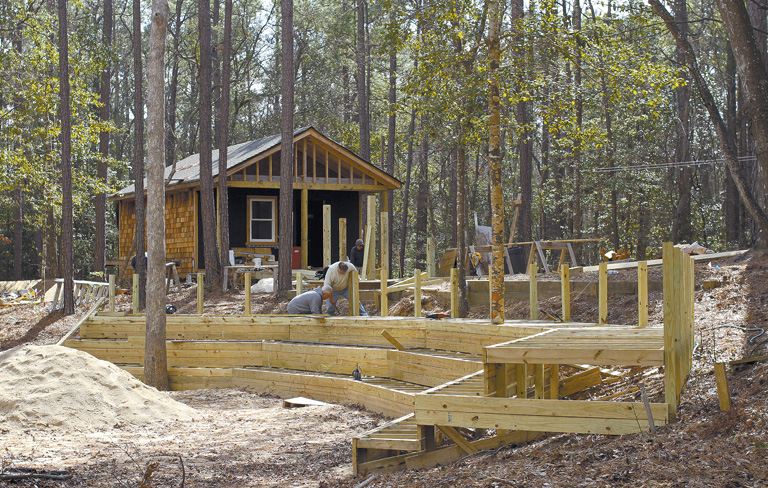 Construction of amphitheater and cabin. Photo by CHELLEshots, Michelle Conner.

Besides the surf camps, a skateboarding camp, a worship arts camp and camps focused on praise, worship and prayer took place at Camp Emmanuel in 2012. This totaled eight weeks of various camps, and about 45 kids came to the Lord, Hobbs says.

Five cabins were completed and put to use last summer; one is under construction, and pilings are in the ground for five more on the opposite side of the camp road. All of them have amenities such as heating, air conditioning, carpeting and indoor plumbing.

Camp Emmanuel also has an athletic field and an open-air pavilion, and there are future plans for facilities such as a dining hall.

The Community Pitches In

Volunteers from Liberty and other churches have helped with construction, and a number of local businesses have donated labor—including electrical work, plumbing and roofing.

A Plymouth man who does not attend Liberty gave “10,000 board feet of juniper,” which is enough native wood to line all the inside walls of the cabins, Hobbs says.

Each cabin “materialwise is still about a $25,000 bill,” states Dave Stormont, owner of Stormont Construction, who has been the contractor for the project. “They go through the same inspection process as new homes.”

Camp Emmanuel will service all of the Outer Banks and eastern North Carolina, Hobbs says; other churches or Christian organizations will be able to rent it out. Several weekend events held by other churches and groups have already taken place there.

Hobbs sees the camp as a vehicle for building up family beyond the immediate church family.

“We really believe that the heart of our Father God is for His children; really, His children, to love them, to care for them,” Hobbs explains. The camp “is an expression of His heart to really reach out and touch kids and touch families and try to draw them into His heart and to His love.”