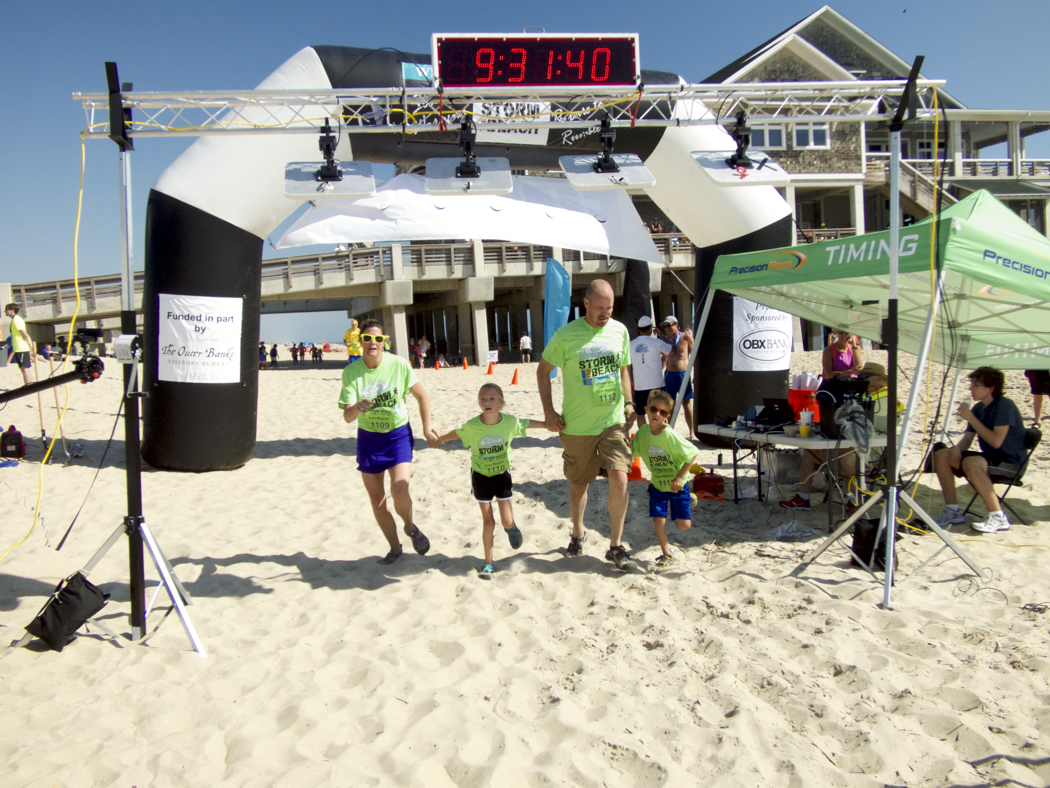 Storm the Beach is a fun race. A fun three races actually—a 5-mile, 3-mile and a one mile fun run.

Taking place on the beach at Jennette’s Pier in Nags Head, the setting is beautiful but the setting is just a small part of the story. The obstacles are designed to be a little challenging but bring a smile.

With names like sand fiddler crawl, rum crawl and the flipper, how could it be any other way?
But what really sets Storm the Beach apart from every other race is the joy of watching families and groups as they run the race.

Sure, there are some competitors who are trying to turn in the best time, and this year we had something that vary rarely happens. Brittany Ostlund from Kill Devil Hills was the overall champ running the 5-mile in 49:25. It is almost unheard of for a woman to finish first in any kind of a race—so way to go Brittany. 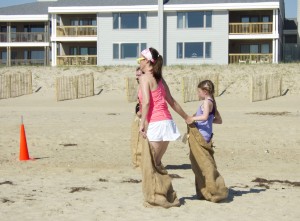 Mother and daughter in sack obstacle.

Even though it’s a lot of fun, Storm the Beach is not an easy race—try walking for three or five miles on sand to get a feel for what it’s like; then run that same distance and throw in 13 or 14 obstacles along the way.

Yet through it all there is an unmistakable sense of “we’re in this together.” Sons stop to help their mothers across the walls, a mother holding her daughter’s hand hops together in gunny sacks. Fathers telling sons and daughters, “Come on you can do this. It’s not that much farther.” 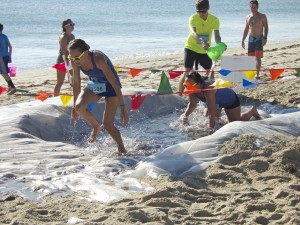 The water hazard. Runners going out scoop a small bucket of sea water in. Runners retuning have to go through it.

The groups are a mix of cancer survivors, friends, families and businesses. There were a couple of runners from the National Park Service jogging along. They were wearing NPS T-shirts, but must have taken another team name because I didn’t notice a Team National Park Service in the listings.

I jogged alongside one of the team members for a little bit and asked her about the NPS runners. She told me she was out here because she wanted a challenge. I asked if she was running the three or five miler. “The three,” she told me. “I didn’t want that big a challenge.” 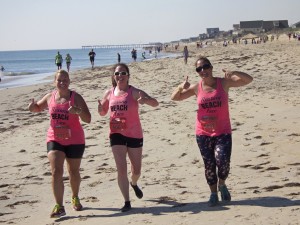 Sunday was a very warm day and by 9:00 a.m. when the runners were coming in the heat was building, but that didn’t seem to stop anyone. Cheering each team member to the finish line they all seemed to celebrate a being together and accomplishing something as they came to the finish line.

The race is organized by Outer Banks Sporting Events, who also hold the Outer Banks Marathon in November. Proceeds go to a couple of great local organizations. the Outer Banks Relief Foundation and the Dare Education Foundation share equally proceeds from the all OBSE races.