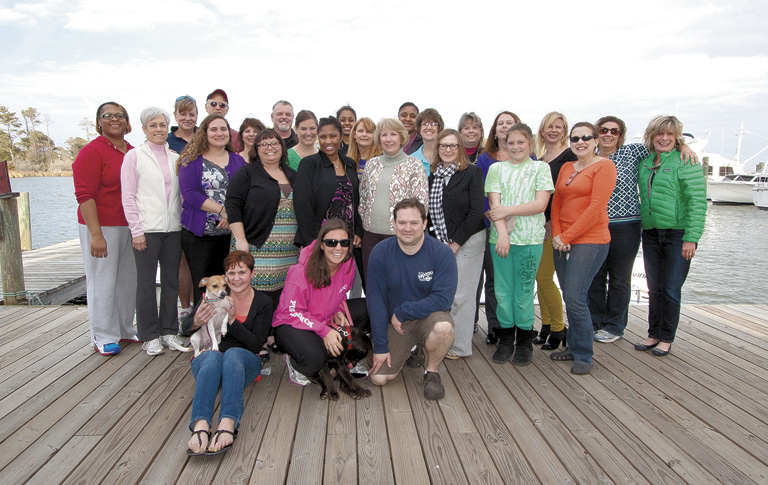 If you happen to see a group of people running away from Food-A-Rama in the dark of night with a police car following close behind, don’t worry; it’s just the Roanoke Island Community Walk/Run group taking to the pre-dawn streets of Manteo.

Andrian “Sweetpea” Tillett wanted to run early in the morning, so she posted on Facebook that she wanted a buddy to run with so that she could feel safe. “I wanted to get back into exercising,” says Sweetpea. She’d been a runner in the past and used to teach hip-hop cardio classes. “Then I got lazy, plain and simple.”

For a while she didn’t get any response to her Facebook posting. Then, at her husband’s suggestion, she reworded her request. “Run your pace, walk your pace… I will do this with you at 5:30 in the morning,” says Sweetpea.

Her first two recruits were Christine Walker and Amy Etheridge. “We started out running ten seconds, walking a minute,” says Sweetpea. “Then I’d sneak in a couple more seconds.”

She kept that same post up on Facebook, asking folks to meet her Monday, Wednesday and Friday at 5:30AM at the Food-A-Rama. And slowly, more people started to show up. Sweetpea planned out a 3-mile route, and encouraged people to walk, run or crawl… whatever they could muster.

Enough people started coming that the town police on duty in the wee hours would watch over them during their route to keep them safe.

“We encourage each other,” says Sweetpea. “We always say: ‘Slow and steady is better than sitting in park.’ We’re not going to leave anybody behind.”

The group has a wide variety of fitness levels, and walkers/runners range in age from elementary school (some moms bring their kids to run with them) to 60-years-old. Men and women participate, and come from all walks of life—business owners, the mayor, nurses, a doctor. Several of the women in the group banded together to participate in the Outer Banks Marathon last fall, calling themselves the Island Girlz.

Sweetpea talks of one group member who, after months of trying to make the whole route, one day finally did. When she rounded the final corner, all of the other runners stood and cheered her on. Says Sweetpea, “There were tears rolling down her face.”

“We’ve had a lot of weight loss—I’m down twenty pounds. We’ve had people lower their blood pressure and diabetes. It’s helped some who have had back surgery get moving.”

Sue Goodrich runs with the group regularly and has found that the results aren’t all physical. “It’s been a really fabulous group of people—and everybody sort of helps each other out,” says Sue. “It’s just my time—it’s wonderful.”

The Roanoke Island Community Run/Walk group is open to everybody. The only requirement is to be on time. “We meet at 5:30 sharp,” says Sweetpea. “By 5:31 we’re off!”