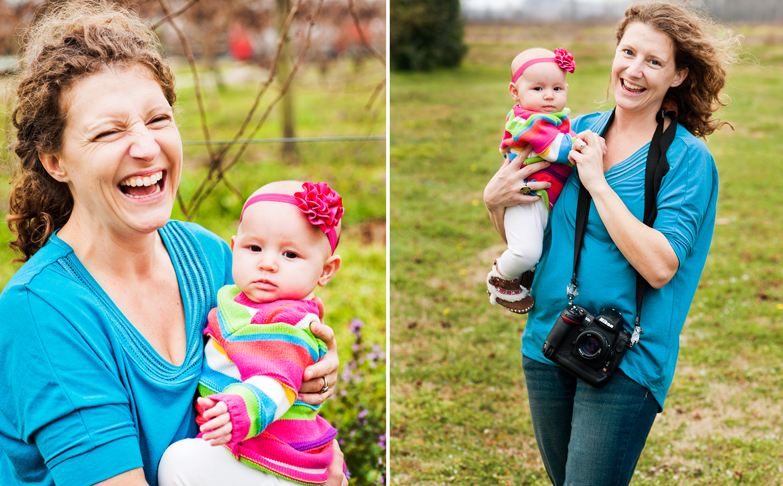 Brooke Mayo shooting one of her favorite subjects, babies.

Her southern drawl and twinkling eyes put her subjects at ease as she refers to them by her patented Brookeisms: ladybug, sassybuns, sugarbutt.

Brooke’s sweet-as-pie demeanor belies her ambition and savvy business sense. “There are so many great photographers online with kick-butt pictures,” says Brooke. “I always want to do something better.”

Beyond taking pictures, Brooke has published two books: Diving Doggies: A Celebration of Play Underwater and Shake, Rattle & Shoot: The Business of Baby Photography. Just released in the end of 2011, Baby Photography is already being used as a textbook for higher-level photography classes all over the country.  She’s a force to be reckoned with on social media, constantly Facebooking, Twittering and blogging to keep her name and her business fresh in her clients’ minds. She also finds time to teach classes on photography all over Eastern North Carolina.
Since 2003, she’s expanded Brooke Mayo Photographers to include two associate photographers, Carrie Roen and Candace Owens.  She calls Brooke Mayo Photographers’ style “pretty versus gritty”, and Candace agrees. “Our photos are really vivid… we love color!”

Her trajectory from a casual interest in photography to one of the most sought-after and well-acclaimed photographers on the East Coast has been somewhat unconventional.

“I changed my major ten times in college!” Brooke laughs. There was political science, art, geography, interior design and painting before she settled on photography. She even briefly flirted with the notion of becoming a bailiff—“I’m obsessed with bad guys!” she admits.

She spent some time in Australia, Europe and New York City honing her skills before she settled back into life in North Carolina. Now a wife to John Wright and a mother to two-year-old Poppy, Brooke balances motherhood with a career that shows no signs of slowing down.
Clients from all over the world (most recently Puerto Rico and Italy) request Brooke and her team to photograph weddings, but she has a soft spot for babies (“beebsters”, she calls them), dogs and old people (“the most gentle history lessons ever”). Brooke tears up a little when she mentions her grandmother who suffers from Alzheimer’s. She confides that in another life she might’ve chosen to work in an Alzheimer’s home, helping others like her grandmother.
On the day I’ve come to interview her, she’s on the phone trying to find a home for the stray dog that had wandered into her yard the day before. Dogs were her first photographic interest. “For the longest time I didn’t have a lot of friends here,” says Brooke. “The dogs were my friends.”

“I had a blast making the Diving Doggies book,” says Brooke. “What I was doing was so different from what I had been shooting—it got me really inspired and excited about photography.”
She’s forever searching for new and creative ideas for photo shoots, especially favoring dreamy underwater scenes. “I just love the way fabric and hair moves underwater,” says Brooke.

Looking forward, Brooke has hopes to collaborate with Renee Landry of Renee Landry Style on a book about kids’ birthday parties, but she’s open to whatever may come her way. “You never know,” says Brooke. “Something pops up in your e-mail… and well, you just never know. I try not to schedule my life so rigidly. I want to leave it open and available. Babies, dogs, weddings… this just all fell into place.”