Sending a Ship to Sea 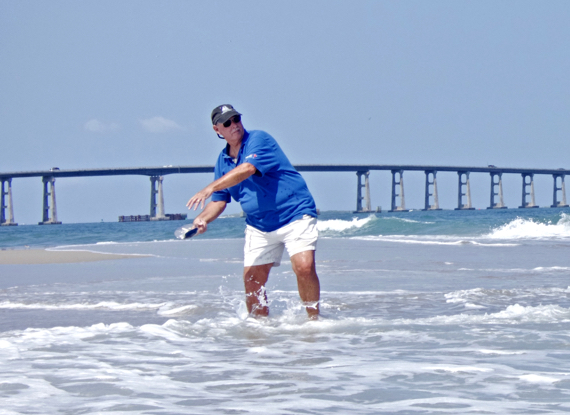 Larry Hansen describes himself as a ship’s carpenter, although he may not be the typical carpenter of an Outer Banks vessel. Larry is the carpenter of ships in a bottle.

He moved to Colington about five years ago, taking the roundabout route from Syracuse, NY to Florida and finally to the Outer Banks.

He had first landed on local soil back in the 1970s, walking the beaches of Ocracoke with his family and through repeated visits knew this is where he wanted to be. Along the way he became intrigued with the skills of local artists.

“A couple of the things I really appreciated about the Outer Banks were the Currituck style decoys made out of canvas When I moved here I started doing those, and I’ve got quite a collection of those,” he said. “And the other thing was I started to carve ships in bottles. That always intrigued me.”

It’s an intricate process putting a ship in a bottle, with the ship constructed to the size of the neck of the container. The masts are hinged and when the ship is slid into the bottle the masts, which are on hinges, are popped up with a string and the string is carefully removed.

Larry is intrigued with history. He made the connection almost immediately between the Kill Devil Rum being distilled in Manteo at the Outer Banks Distilling and the era of prohibition. “I was really impressed by what these young fellows had done,” he said. “I went over and saw them, and I said, ‘If you would be willing to give me a bottle I would be willing to put a flagship in there for you.’ So that’s where the bottle came from.” 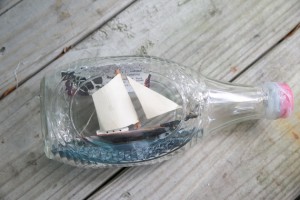 Ship in a bottle. The Boozhyot. Photo Kati Wilkins

The bottle, though, was just one part of what he hopes to do. Larry will be sending his ships in a bottle out to sea.

“My plans are, when I had this idea of building a ship and putting a note in the bottle, to launch one a month for the next three months,” he said. “There’s a little note in the bottle that has my business card, that says, ‘This is your gift from the sea, but I really would appreciate it if you would tell me where and when you found it.’”

He just launched the first ship from the south point of Oregon Inlet. With the surf of the outgoing tide breaking over his feet, Larry reared back a threw the bottle as far as he could into the current. The bottle bobbed in the surf and slowly made its way to the channel.

He watched float away, and offered a thought. “Maybe someone from Wanchese will find it, or maybe it will float out to sea. It’ll be fun to see what happens.”