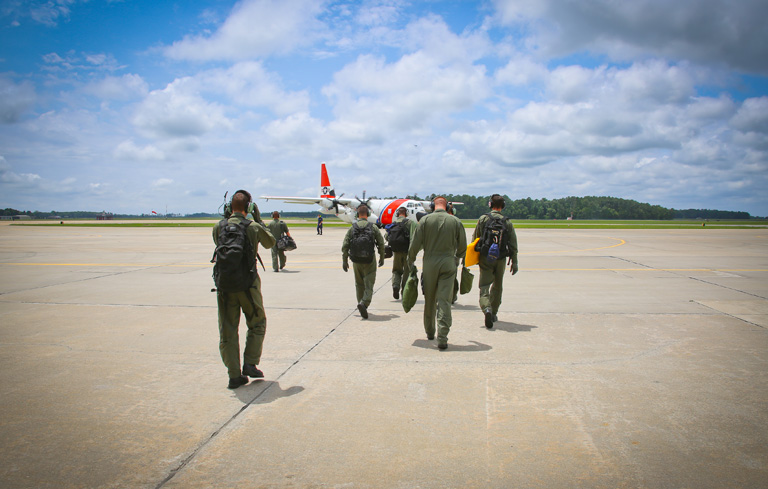 Patrolling the seas from the sky. Crew of Hercules C130 goes to work.

The first thing I noticed when contacting and visiting the Coast Guard units serving the Outer Banks is the friendliness and a sense of being welcomed.

And I was impressed by the dedication and professionalism of those at the Coast Guard stations, whether officer or enlisted personnel.

Plus the fact that they obviously like their jobs and take pride in what they do.

Well they should, too.

The services the Coast Guard provides add much to the safety and enjoyment of the area—from search and rescue, to law enforcement, to aids to navigation. 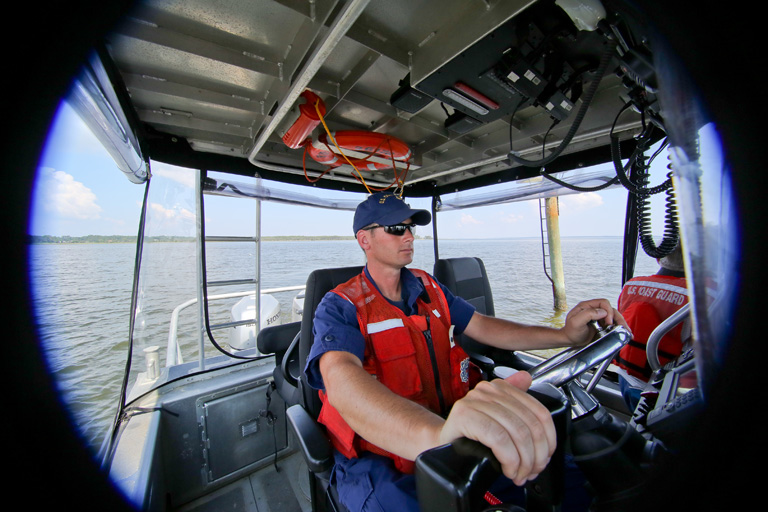 The Oregon Inlet Coast Guard Station is manned 24 hours a day, seven days a week. As one person working there said, “Just like a fire station.” Thirty-five people are stationed at Oregon Inlet in a well-equipped, handsome and relatively new building, complete with small bedrooms and a tower overlooking Oregon Inlet, the Bonner Bridge and beyond. The facility also has a well-stocked kitchen with three cooks on rotating shifts serving about a dozen breakfasts every day, 15-20 lunches, and another dozen at dinner.

Four boats are housed at Oregon Inlet Station. The largest are the two 47-foot motor lifeboats. Looking like a sealed tremendous capsule, they can take the punishment Outer Banks waters can dish out. With the twin engines, the boats are capable of operating in 50-knot winds, 30-foot seas, and 20-foot breaking surf. The watertight boats are designed so that if they get rolled over by heavy seas they will automatically right themselves. (One would hope so.)

I asked Petty Officers First Class Shawn Crahen and Kenneth Akana: “When do you feel the safest on this boat?”

The station also has a 25-foot response boat that can operate in 25-knot winds, 6-foot seas, and at a top speed of 46 knots—and that’s fast.

A special-purpose shallow-water boat, a 24-footer, rounds out the basic water-based equipment at Oregon Inlet.

During a typical year, the Oregon Inlet Station responds to about 75 to 100 search and rescue missions. There are many boaters walking around today who literally owe their lives to the work done by the rescuers at Oregon Inlet.

In addition to search and rescue, the Coast Guard Station Oregon Inlet conducts about 120 law enforcement boardings of recreational watercraft a year to check for proper safety equipment, registrations, and the like. They also board fishing boats—about 60 a year—to make sure fishing regulations are being adhered to.

In addition to the work done by Coast Guard personnel, the local Coast Guard Auxiliary—Flotilla 1607—got high marks and praise from all the Outer Banks facilities for the work they’re doing. The Flotilla conducts boat safety classes, as well as providing volunteer logistical support. 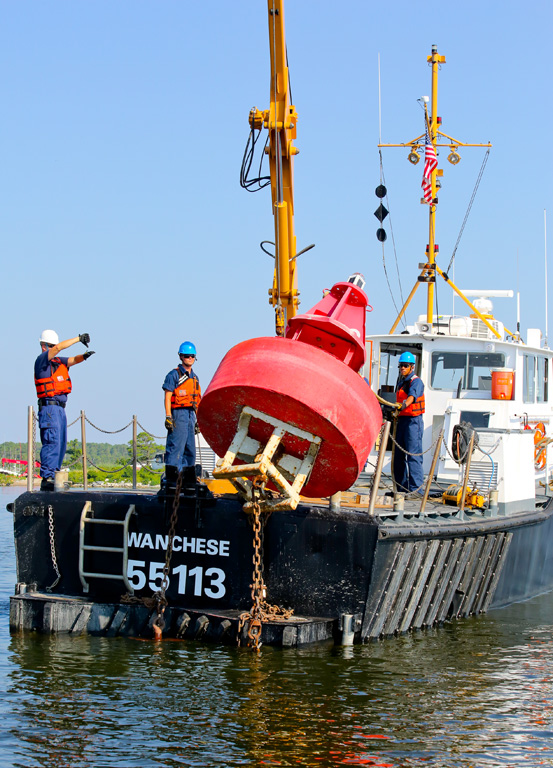 Their whole purpose is to make sure the many boaters—recreational and commercial—plying the waters of the Outer Banks don’t make headlines either.

They do this by maintaining and servicing the approximately 600 buoys and channel markers, including 100 floating buoys, in the vast expanse of waters in the area—from the North Carolina-Virginia border to the south end of Ocracoke Island.

At the Wanchese Station, Chief Boatswain Mate Paul Bertram, who is in charge of the operation, explains that the team’s area of responsibility encompasses five sounds—the Albemarle, Currituck, Croatan, Roanoke, and Pamlico—plus seven prominent rivers that are branches for the Albemarle Sound, and numerous back bays and small tributaries on the western edge of the coast associated with the Pamlico Sound.

Bertram, who has 18 years of service in the Coast Guard, notes that his team does its work with just over a dozen people at the station. Floating equipment is a 55-foot boat, a 26-foot trailerable boat, and an 18-foot shallow water skiff. 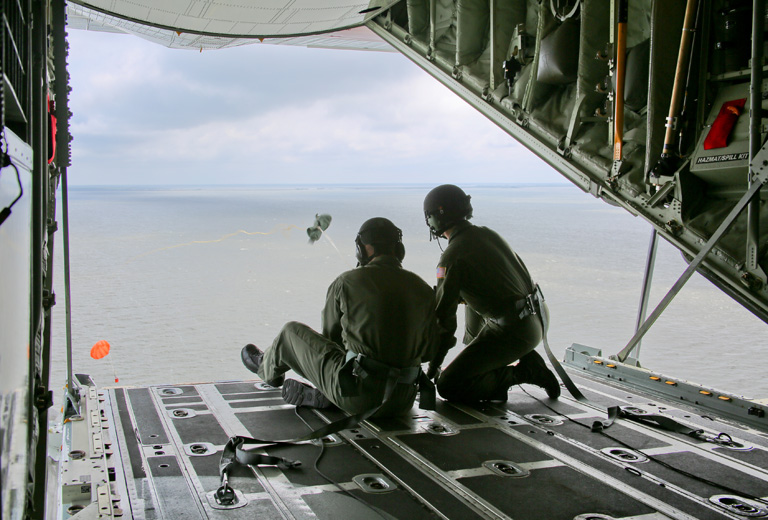 Lt. Jon McCormick greeted me at the Air Station at Elizabeth City, and invited me to join a tour of several others. Regularly the Coast Guard Air Station provides tours of the facilities.

Air Station Elizabeth City was established at the beginning of World War II, with primary missions involving anti-submarine warfare; the German U-boats were wreaking havoc off the Outer Banks. Even in the beginning, the Air Station was also involved in search and rescue, and seamen from torpedoed ships and at least one U-boat crew owed their lives to the Coast Guard.

McCormick led the way to a large hanger where the base’s MH-60T helicopters, the “Jayhawks,” were being serviced. Described as the world’s premier search and rescue helicopter, Elizabeth City Air Station houses five of them providing search and rescue response from north of Ocean City, Maryland, to the North Carolina/South Carolina border. In extreme circumstances they can be deployed to points east of Bermuda. In addition to search and rescue, the Jayhawks are also used in law enforcement.

The Lieutenant took me to an adjoining hanger, which appeared to cover an area equal to about two full-size football fields. There the huge C-130 Hercules are serviced. McCormick pilots one of those four-engine monsters.

In addition to search and rescue—and the rescue swimmers are trained here and do their risky work in often extremely choppy seas—Air Station Elizabeth City is charged with port security, counter-narcotics measures, fisheries protection, and alien migrant interception. They also fly out of St. John’s, Newfoundland, to track icebergs that might be a threat to major shipping lanes. In support of NOAA, pilots from the Air Station track whale migrations, and conduct over-flights after a storm to make sure navigational aids are on station and operating.

The Air Station is home to about 340 personnel. The Elizabeth City base is employees approximately 2000 personnel.

Just one example of the coordination and speed with which the Coast Guard goes to work: This summer a 26-foot boat with seven people aboard began sinking 14 miles off Cape Hatteras. The Coast Guard was contacted, and immediately a 25-foot Coast Guard response boat was launched, along with a 47-foot motor lifeboat from the Coast Guard Station at Hatteras Inlet. Also, out of Elizabeth City Air Station, an MH-60 Jayhawk helicopter flew down to the site of the boat in distress to assist if necessary. Six of the boaters were taken aboard 25-foot response boat, while Petty Officer 1st Class Mark Burgoa from the response boat boarded the distressed vessel and helped the captain bail water until the 47-foot motor lifeboat arrived, attached a line to the sinking vessel and towed it into harbor. Everyone was safe.

As Petty Officer 2nd Class Scott Hunter, the coxswain aboard the response boat said, “That is why we train and practice every day, so that when we do get that call, the response is second nature.”