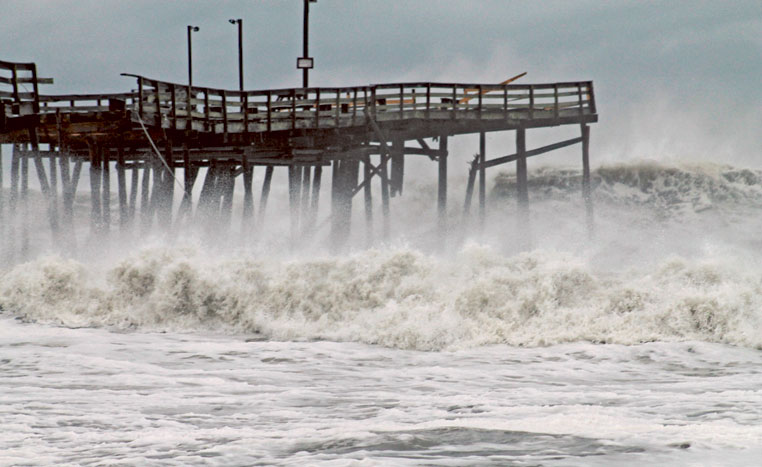 It’s been a year since Hurricane Sandy brushed past the Outer Banks. That day—October 29, 2012—is fading into memory now, becoming a little less clear, a little more indistinct.

After the spectacular October that we have had this year, a storm of the magnitude and power of Sandy seems somehow surreal, somehow the thing of legend and not a day of confusion and dread.

I was just about ready to go into work when publisher, Cathy Baldwin called. “Can you come into work right away?” she asked. “There’s water in the parking lot and the tide is coming in.”

Since our office at the time was a full city block from the ocean, nothing about that description sounded promising.

The day was spent carrying everything we could out of the office, wading through cold sea water, first to our knees, then to our thighs and finally waist high, all the while watching the Atlantic Ocean inexorably seep into our office.

We were on deadline at the time and we had to put out the winter edition of the North Beach Sun, so we moved everything to Adam and Cathy’s home, took three days to get everything up and running, and kept going.

It wasn’t heroic, or exceptional—it’s just what you had to do. It’s just what businesses and families all over the Outer Banks did.

Yet as difficult as it was, as destructive and disruptive as Sandy made life from Ocracoke to Corolla, we got off easy. It’s hard to keep that in mind as you watch Avalon pier turned to toothpicks by the surf, or experience a week of 3’ deep standing water on the Bypass in Kitty Hawk, but the facts are clear—within a month, life on the Outer Banks was almost back to normal and a year later, parts of the northeast will never know normal again.

Whenever there is an event of this magnitude, we search for lessons or meaning, but it’s somewhat difficult to isolate any one thought that defines what happened. Certainly we saw examples of what is best about the human spirit, but I suspect, that spirit has always been there . . . and maybe that’s the lesson—that we don’t need disaster and trauma to remember we have the capacity to overcome so many obstacles simply by being who we are.