Riding a Wish Along the Beach 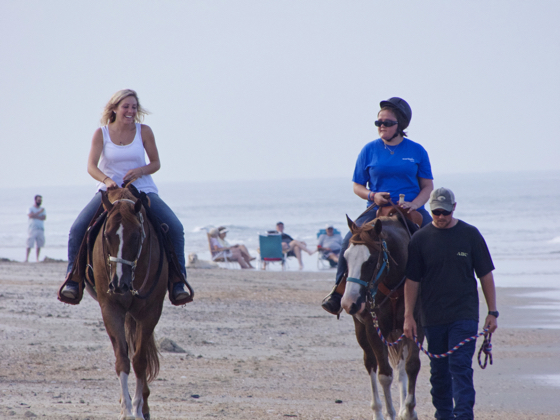 Riding on the beach in Corolla. (Lto R)LeeAnn McGraw, Maggie, Cody Edwards leading the horse. Cody walked the length of the ride.

Maggie’s dream of riding a horse on the beach was going to happen. Living in Wisconsin, realizing that dream seemed difficult for the 15-year-old, but sometimes wishes do come true.

Almost from infancy her neurofibromatosis Type 2 (NF2) has been a part of her life. A rare genetic condition characterized by benign tumors that form on the nerves of the brain, Maggie has lost all sight in her right eye and has severe tunnel vision in her left.

When her parents, stepfather Bruce and mother Carol, learned about their daughter’s dream, they contacted the Wisconsin Make a Wish Foundation and asked if there was any place where their daughter could ride on the beach and see wild horses.

“They did some research and contacted us,” Sarah Butcher, wish service coordinator for Make a Wish Eastern North Carolina said.

The Eastern North Carolina chapter contacted local volunteers and on a still, warm evening in the middle of July on the beach in Corolla, Maggie’s dream came true, though riding the beach and seeing the wild horses would have to be two separate events.

Although the focus of the event was on Maggie, her family was as much a part of the experience as she was. The oldest of four sisters, the family had come from the middle of Wisconsin to stay in Corolla for a week, made easier by the donation of a house by local homeowner Fran Grossman.

The granting of the wish is a moment that can be transformative and is something to be treasured. Yet as much joy as Maggie may have felt, her family seemed to also be filled with joy and thrilled for the experience her daughter was having.

Maggie is in treatment again, going to a hospital every other Monday for chemotherapy, but through it all, she has maintained a remarkable attitude. “Maggie’s extremely positive,” Bruce said. “She’s always has her chin up. It’s gotten a lot tougher for her with this round. Even through all of that she’s always positive. It’s amazing.”

That attitude came through during the ride. There weren’t any time limits on how long the horses would be out, and as Maggie and LeeAnn McGraw, owner of L&L Farm in Powells Point, rode north the horses and riders became barely discernible dots on the horizon.

Her two youngest sisters, two and four years old, played at the edge of the surf; her other sister, a year younger than Maggie, was given a ride by a Sheriff’s Deputy to join her mother and see how her sister was doing. When LeeAnn and Maggie came back into view, they were laughing and talking.

“It was lot’s of fun,” LeeAnn said. “We were talking about a little bit of everything. She’s been a lot of places. We talked about food and good places to eat. We talked about horses. It was a great time, something I’ll never forget.”

For Maggie it was also something special; a memory that she may recall through an interest she is starting to develop in painting. “I would paint a beach with a horse on it,” she said.

And in that memory there may also be good conversation and riding. “I like the way I feel on a horse. I like the movement of the horse. I just like the feel of it,” she said.

There were a number of local businesses and individual involved who helped make Maggie’s wish come true. Here is a partial list: