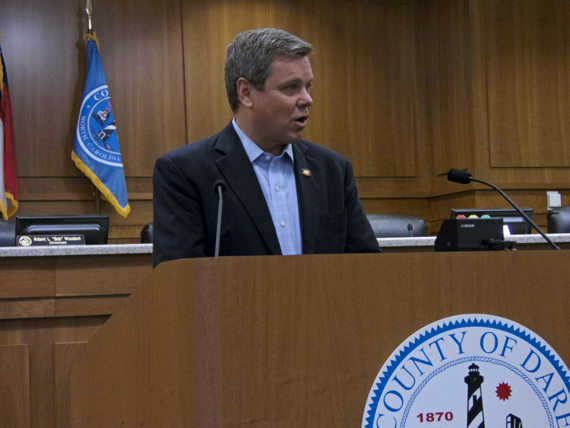 Paul Tine speaking at the Dare County press conference. ““It comes down to a money grab.”

As the North Carolina legislature struggles to create a budget for the upcoming year, a proposed redistribution of sales tax revenue in the Senate bill is raising red flags in Dare and Currituck Counties.

At a press conference held this morning before the August Dare County Commissioner’s meeting, local elected officials spoke about the proposal. Represented at the meeting were the mayors of the incorporated towns of Dare County, Vice Chairman of the Currituck County Board of Commissioners David Griggs and State Representative Paul Tine.

County Manager Bobby Outen addressed a misconception that because ad valorem taxes are lower in Dare County than many other counties there is room for the taxes to be raised. “Dare County is a low tax rate but high value county versus some places that have high tax rates but low values,” he said.

The concept of high value but lower tax rate was a theme that the mayors returned to a number of times, pointing out that the dollar amount of tax paid by property owners in Dare and Corolla Counties is consistent with other property owners throughout the state.

Commissioner Griggs noted that a tourist based economy has expenses that are not experienced by other areas, saying, “Southern hospitality doesn’t come cheap.” 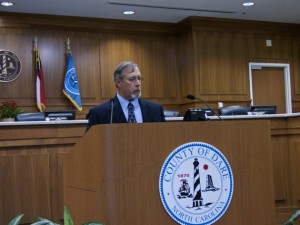 He raised the concern, as did other speakers, that the county had to maintain police and fire departments larger than would be typical for an area with the permanent population of Outer Banks communities.

“This bill only uses our year round population of 24,000 in it’s calculation,” he said. “It is our ability to generate sales tax revenue that helps support the heavy cost of supporting our number one industry—tourism.”

In his remarks, Representative Tine provided details of the specifics of how the redistribution would be implemented as proposed.  In outlining the problems with the proposal, he paid particular attention to inequities in how revenues would be redistributed and the impact it would have on local services.

“It’s a bad policy because you’re taking a local sales tax which is used to support a local economy . . . You’re taking that local money and redistributing it to other areas,” he said. “ And not only is it a bad redistribution of wealth, it’s not even a very good plan.”

He specifically cited the use of population as the criteria for redistribution and the inherent inequities it would create. “When you look at it, it gives money to counties like Orange (where Chapel Hill and Hillborough are located) and takes money away from counties like Avery . . . that have a very difficult time of it with high unemployment and low wages.”

His explanation for how it came about was direct. “It comes down to a money grab,” he said.

Senator Bill Cook was also invited but was unable to attend. Although he did vote for the Senate budget when it came to the floor, he is on record as opposing the redistribution.

In a June 18 press release he wrote, “I am opposed to the sales tax redistribution which is included in the Senate budget. I intend to continue to work to find alternative solutions to reduce this inequitable burden to Dare and Currituck Counties when the budget goes into conference. . .However, I supported the budget because it offers much good to District 1. . .”